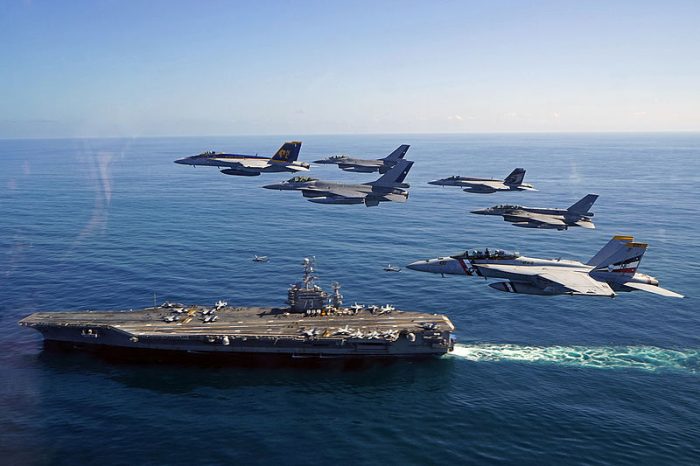 Iran just conducted another provocative missile test, more U.S. troops are being sent to the Middle East, it was just announced that the U.S. military will be sending B-1 and B-52 bombers to South Korea in response to North Korea firing four missiles into the seas near Japan, and China is absolutely livid that a U.S. carrier group just sailed through contested waters in the South China Sea. We have entered a season where leaders all over the globe feel a need to rattle their sabers, and many fear that this could be leading us to war. In particular, Donald Trump is going to be under the microscope in the days ahead as other world leaders test his resolve. Will Trump be able to show that he is tough without going over the edge and starting an actual conflict?

As tensions between the U.S. and Iran continue to mount, the semi-official news agency Tasnim is reporting that Iran’s Revolutionary Guard has successfully conducted yet another ballistic missile test, this time from a navy vessel. Called the Hormuz 2, these latest missiles are designed to destroy moving targets at sea at ranges up to 300 km (180 miles).

Reports on the latest test quotes Amir Ali Hajizadeh, commander of the IRGC’s Aerospace Force, who confirmed that “the naval ballistic missile called Hormuz 2 successfully destroyed a target which was 250 km away.”

The missile test is the latest event in a long-running rivalry between Iran and the United States in and around the Strait of Hormuz, which guards the entrance to the Gulf. About 20% of the world’s oil passes through the waterway, which is less than 40 km wide at its narrowest point.

So how will Trump respond to this provocation?

Will he escalate the situation? If he does nothing he will look weak, but if he goes too far he could risk open conflict.

Elsewhere in the Middle East, things are already escalating. It is being reported that “several hundred Marines” are on the ground in Syria to support an assault on the city of Raqqa, and another 1,000 troops could be sent to Kuwait to join the fight against ISIS any day now. The following comes from Zero Hedge…

While the Trump administration waits to decide if it will send 1,000 troops to Kuwait to fight ISIS, overnight the Washington Post reported that the US has sent several hundred Marines to Syria to support an allied local force aiming to capture the Islamic State stronghold of Raqqa. Defence officials said they would establish an outpost from which they could fire artillery at IS positions some 32km (20 miles) away. US special forces are already on the ground, “advising” the Kurdish-led Syrian Democratic Forces (SDF) alliance according to the BBC.

The defence officials told the Washington Post that the Marines were from the San Diego-based 11th Marine Expeditionary Unit, and that they had flown to northern Syria via Djibouti and Kuwait. They are to set up an artillery battery that could fire powerful 155mm shells from M777 howitzers, the officials said. Another marine expeditionary unit carried out a similar mission at the start of the Iraqi government’s operation to recapture the city of Mosul from IS last year.

Meanwhile, China is spitting mad for several reasons. For one, the Chinese are absolutely furious that South Korea has allowed the U.S. to deploy the THAAD missile defense system on their soil…

China is lashing out at South Korea and Washington for the deployment of a powerful missile defense system known as the Terminal High Altitude Area Defense system, or THAAD, deposited at the Osan Air Base in South Korea on Monday evening.

The deployment of THAAD follows several ballistic missile tests by North Korea in recent months, including the launch of four missiles on Monday, three of which landed in the sea off the coast of Japan. Though THAAD would help South Korea protect itself from a North Korean missile attack, China is vocally protesting the deployment of the system, claiming it upsets the “strategic equilibrium” in the region because its radar will allow the United States to detect and track missiles launched from China.

Of course the U.S. needed to do something, because the North Koreans keep rattling their sabers by firing off more ballistic missiles toward Japan.

But it is one thing to deploy a missile defense system, and it is another thing entirely to fly strategic nuclear bombers into the region.

So if the Chinese were upset when THAAD was deployed, how will they feel when B-1 and B-52 bombers start showing up in South Korea?…

Earlier this week, trigger-happy Kim pushed his luck once more when he fired off four ballistic missiles into the seas near Japan.

Now US military chiefs are reportedly planning to fly in B-1 and B-52 bombers – built to carry nuclear bombs – to show America has had enough.

South Korea and the US have also started their annual Foal Eagle military exercise sending a strong warning to North Korea over its actions.

A military official said 300,000 South Korean troops and 15,000 US personnel are taking part in the operation.

The Trump administration has openly stated that all options “are on the table” when it comes to North Korea, and that includes a military strike.

It has been more than 60 years since the Korean War ended, but many are concerned that we may be closer to a new Korean War than we have been at any point since that time.

And of course our relationship with China is tumbling precariously downhill as well. Another reason why the Chinese are extremely upset with the Trump administration is because a U.S. Navy carrier battle group led by the USS Carl Vinson sailed past islands that China claims in the South China Sea just a few weeks ago.

In China, the media openly talks about the possibility of war with the United States over the South China Sea. Most Americans are not even aware that the South China Sea is a very serious international issue, but over in China this is a major focus.

And the U.S. military has recently made several other moves in the region that have angered the Chinese…

Also in February, the U.S. sent a dozen F-22 Raptor stealth fighters to Tindal AB in northern Australia, the closest Australian military airbase to China, for coalition training and exercises. It’s the first deployment of that many F-22s in the Pacific.

And if that didn’t get the attention of the Chinese government, the U.S. just tested four Trident II submarine-launched ballistic missiles during a nuclear war exercise, sending the simulated weapons 4,200 miles from the coast of California into the mid-Pacific. It’s the first time in three years the U.S. has conducted tests in the Pacific, and the first four-missile salvo since the end of the Cold War.

I can understand the need to look tough, but eventually somebody is going to go too far.

If you are familiar with my work, then you know that I believe that war is coming. Things in the Middle East continue to escalate, and it is only a matter of time before a great war erupts between Israel and her neighbors. Meanwhile, U.S. relations with both Russia and China continue to deteriorate, and this is something that I have been warning about for a very long time.

We should hope for peace, but we should also not be blind to the signs of war that are starting to emerge all over the planet. Relatively few people anticipated the outbreak of World War I and World War II in advance, and I have a feeling that the same thing will be true for World War III.