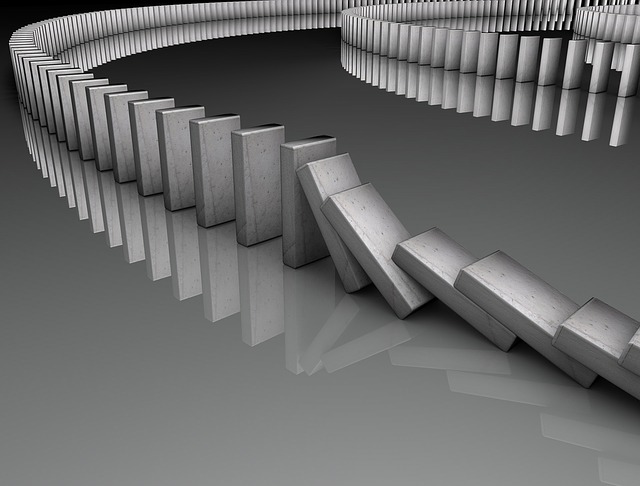 For many years, China has been leading the revolution in global trade. But now we are witnessing something that is almost unprecedented. Chinese exports are falling, and Chinese imports are absolutely imploding…

Growth of exports from China has been dropping relentlessly, for years. Now this “growth” has actually turned negative. In September, exports were down 3.7% from a year earlier, the “inevitable fallout from China’s unsustainable and poorly executed credit splurge,” as Thomson Reuters’ Alpha Now puts it. Most of these exports are manufactured goods that are shipped by container to the rest of the world.

And imports into China – a mix of bulk and containerized freight – have been plunging: down 20.4% in September from a year earlier, after at a 13.8% drop in August.

This week it was announced that Chinese GDP growth had fallen to the lowest level since the last recession, and that makes sense. Global economic activity is really slowing down, and this is deeply affecting China.

Well, based on the amount of stuff that is being shipped around in our country it appears that our economy is really slowing down too. The following comes from Wolf Richter, and I shared some of it in a previous article, but I think that it bears repeating…

September is in the early phase of the make-or-break holiday shipping season. Shipments usually increase from August to September. They did this year too. The number of shipments in September inched up 1.7% from August, according to the Cass Freight Index.

But the index was down 1.5% from an already lousy September last year, when shipments had fallen from the prior month, instead of rising. And so, in terms of the number of shipments, it was the worst September since 2010.

It has been crummy all year: With the exception of January and February, the shipping volume has been lower year-over-year every month!

The index is broad. It tracks data from shippers, no matter what carrier they choose, whether truck, rail, or air, and includes carriers like FedEx and UPS.

What major retailers such as Wal-Mart are reporting also confirms that we are in a major economic slowdown. Wal-Mart recently announced that its earnings would fall by as much as 12 percent during the next fiscal year, and that caused Wal-Mart stock to drop by the most in 27 years.

And of course this is going to have a huge ripple effect. There are thousands of other companies that do business with Wal-Mart, and Reuters is reporting that they are starting to get squeezed…

Suppliers of everything from groceries to sports equipment are already being squeezed for price cuts and cost sharing by Wal-Mart Stores. Now they are bracing for the pressure to ratchet up even more after a shock earnings warning from the retailer last week.

The discount store behemoth has always had a reputation for demanding lower prices from vendors but Reuters has learned from interviews with suppliers and consultants, as well as reviewing some contracts, that even by its standards Wal-Mart has been turning up the heat on them this year.

“The ground is shaking here,” said Cameron Smith, head of Cameron Smith & Associates, a major recruiting firm for suppliers located close to Wal-Mart’s headquarters in Bentonville, Arkansas. “Suppliers are going to have to help Wal-Mart get back on track.”

Similar things are going on at some of the other biggest companies in America as well.

For instance, things have gotten so bad for McDonald’s that one franchise owner recently stated that the restaurant chain is “facing its final days”…

“McDonald’s announced in April that it would be closing 700 ‘underperforming’ locations, but because of the company’s sheer size — it has 14,300 locations in the United States alone — this was not necessarily a reduction in the size of the company, especially because it continues to open locations around the world. It still has more than double the locations of Burger King, its closest competitor.”

However, for the franchisees, the picture looks much worse than simply 700 stores closing down.

“We are in the throes of a deep depression, and nothing is changing,” a franchise owner wrote in response to a financial survey by Nomura Group. “Probably 30% of operators are insolvent.” One owner went as far as to speculate that McDonald’s is literally “facing its final days.”

Why would things be so bad at Wal-Mart and McDonald’s if the economy was “recovering”?

Come on now – let’s use some common sense here.

All of the numbers are screaming at us that we have entered a major economic downturn and that it is accelerating.

Job openings fell 5.3 percent in August, while a 2.6 percent rise in layoffs and discharges offset a 0.3 percent gain in hires. Finally, the amount of quits — or what Convergex calls its “take this job and shove it” indicator because it shows the percentage of workers who left positions voluntarily — fell to 56.6 percent from 57.1 percent, indicating less confidence in mobility.

And as I discussed the other day, Challenger Gray is reporting that we are seeing layoffs at major firms at a level that we have not witnessed since 2009.

We already have 102.6 million working age Americans that do not have a job right now. As this emerging worldwide recession deepens, a lot more Americans are going to lose their jobs. That is going to cause the poverty and suffering in this country to spike even more, if you can imagine that.

Support is flooding in for a homeless Philadelphia family whose two-year-old son was found wandering alone in a park in the middle of the night.

Angelique Roland, 27, and Michael Jones, 24, were sleeping with their children behind cardboard boxes underneath the Fairmount Park Welcome Center in Love Park when the toddler slipped away.

The boy was found just before midnight and handed over to a nearby Southeastern Pennsylvania Transportation Authority police officer, who took him to the Children’s Hospital of Philadelphia.

He was wearing a green, long sleeve shirt, black running pants and had a diaper on, but did not have shoes or socks.

Could you imagine sleeping on the streets and not even being able to provide your two-year-old child with shoes and socks?

These numbers that I write about every day are not a game. They affect all of us on a very personal level.

Just like in 2008 and 2009, millions of Americans that are living a very comfortable middle class lifestyle today will soon lose their jobs and will end up out in the streets.

In fact, there will be people that will read this article that this will happen to.

So no, none of us should be excited that the global economy is collapsing. There is already so much pain all around us, and what is to come is beyond what most of us would even dare to imagine.