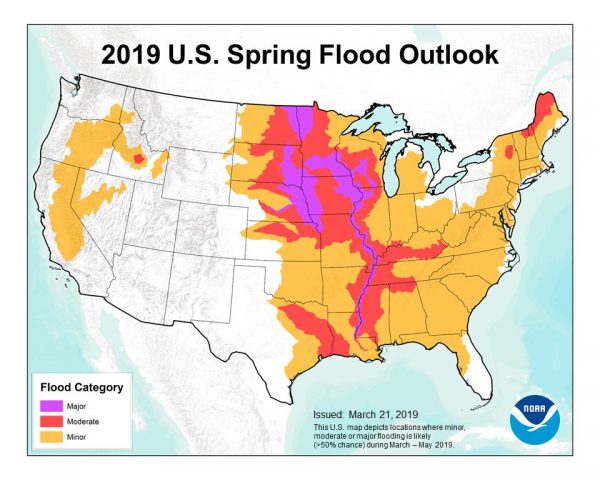 We have never seen catastrophic flooding like this, and the NOAA is now telling us that there will be more major flooding for at least two more months. On Thursday, the National Oceanic and Atmospheric Administration warned that “historic, widespread flooding” would “continue through May”. More than 90 percent of the upper Midwest and Great Plains is currently covered by an average of 10.7 inches of snow, and all of that snow is starting to melt. That means that we are going to transition from one of the worst winters in modern history to a flood season that has already taken an apocalyptic turn for farmers all across America. At this moment, millions of acres of farmland are already underwater. Thousands of farmers are not going to be able to plant crops this year, and thousands of other farmers that have been financially ruined by the floods will never return to farming again. This is already the worst agricultural disaster in modern American history, and it is going to get a whole lot worse.

I posted an article about this crisis yesterday, and I am troubled by the fact that most Americans don’t seem to understand the gravity of what we are facing.

Millions of bushels of wheat, corn and soybeans have been destroyed by flood waters, hundreds of millions of dollars worth of livestock have been lost, and all of us will soon be feeling a lot more pain at the grocery store.

And this would be a complete and utter national nightmare even if the flooding was all over, but the NOAA just told us that we should expect more catastrophic flooding for the next two months…

Our #SpringOutlook 2019 is out today: Historic, widespread flooding to continue through May. Find map, highlights video & more at https://bit.ly/2JqDsIG @NWS #Spring #Flooding

In fact, the NOAA is using the words “unprecedented flood season” to describe what is coming, and they are warning that “more than 200 million people” are at risk…

Forecasters warned the floods would likely to continue through May, and could worsen in the coming weeks.

“This is shaping up to be a potentially unprecedented flood season, with more than 200 million people at risk,” Ed Clark, director of the National Oceanic and Atmospheric Administration’s (NOAA) National Water Center in Tuscaloosa, Alabama, said on Thursday in the agency’s spring outlook.

Of all the natural disasters that we have seen in recent years, this is the biggest, and U.S. food production is going to be dramatically affected because many farmers will not be able to grow crops at all in 2019…

“The reality is this isn’t going to be over for a very long time,” Jorgenson said. “It took years after 2011 for people to come back. For me as a farmer, there are flooded acres here that to think that I’ll be able to plant a crop in 45 days is just virtually impossible.”

And many farmers will never recover from this disaster at all.

According to one farmer in Iowa, somewhere around half of the farmers in his entire county will not be able to come back from this…

“I would say 50% of the farmers in our area will not recover from this,” Dustin Sheldon, a farmer in southwestern Iowa’s flood-devastated Fremont County near the swollen Missouri River, said this week.

I said it yesterday, and I will say it again. This is the worst blow to U.S. agriculture that I have seen in my entire lifetime.

The amount of food that has just been lost is absolutely staggering. Due to the trade war, farmers were storing more wheat, corn and soybeans than ever before, and now the floodwaters have destroyed much of what had been stored…

As prices plummeted last year amid the ongoing trade fight, growers, faced with selling crops at a loss, stuffed a historic volume of grain into winding plastic tubes and steel bins. Some cash-strapped families piled crops inside their barns or outside on the ground.

Farmers say they are now finding storage bags torn and bins burst open, grain washed away or contaminated. Jeff Jorgenson, a farmer and regional director for the Iowa Soybean Association, said he has seen at least a dozen bins that burst after grains swelled when they became wet.

According to the U.S. Department of Agriculture, any wheat, corn or soybeans that are contaminated by flood waters must be destroyed.

I know that I shared the following quote yesterday, but in order to give you an idea of the scope of the losses we are looking at, I want to share it again…

As of Dec. 1, producers in states with flooding – including South Dakota, Nebraska, Kansas, Minnesota, Iowa, Missouri, Wisconsin and Illinois – had 6.75 billion bushels of corn, soybeans and wheat stored on their farms – 38 percent of the total U.S. supplies available at that time, according to U.S. Department of Agriculture data.

And remember, the flooding is just getting started.

In just one county in Iowa, 1.8 million bushels of corn and soybeans have already been destroyed. Nationwide, the losses are off the charts.

Needless to say, prices will be going way up at the grocery store, and they will keep going up for the rest of the year.

Sadly, even after the flood waters are gone the damage that has been done to our agricultural infrastructure will take years to repair…

As the waters began to recede in parts of Nebraska, the damage to the rural roads, bridges and rail lines was just beginning to emerge. This infrastructure is critical for the U.S. agricultural sector to move products from farms to processing plants and shipping hubs.

The damage to roads means it will be harder for trucks to deliver seed to farmers for the coming planting season, but in some areas, the flooding on fields will render them all-but-impossible to use.

In Nebraska alone, hundreds of miles of rural roads have been completely washed out, and farmers such as Annette Bloom are having an extremely difficult time just getting to a main road…

“We are having to travel three miles through pasture and cropland just to get out because our roads are gone,” she says. “And the corn fields are going to be devastating to get in and plant and get that going, because usually we’re planting within the next two weeks and it’s not going to happen.”

Many of America’s farmers will bravely keep going after this disaster, but for many others a financial breaking point has arrived.

Farm bankruptcies had already surged to the highest level since the last recession prior to all of this flooding, and now this crisis will end up driving many of them away from the profession for good. The following comes from NBC News…

Some farmers in Fremont County will probably not return to till their soil, many farmers here said.

In the end, it is going to be a while before we know the full extent of the damage to America’s farms and our food supply, but all of the experts agree that it will be unprecedented.

Food prices are already high, but the truth is that this is as low as they are going to get. Much less food will be produced in our heartland this year, and that will mean skyrocketing prices at our grocery stores.

And this is just one element of “the perfect storm” that is emerging. Our society is starting to be shaken in many different ways, and 2019 is certainly shaping up to be a very “interesting” year.