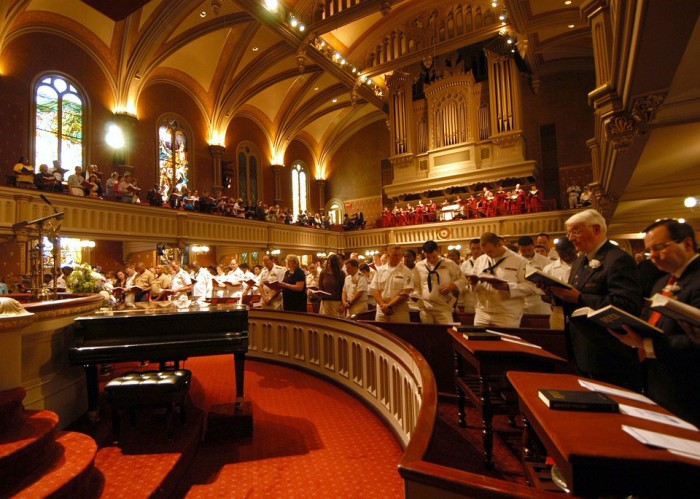 Do you ever wonder if someone might come marching into your church one Sunday morning and start shooting?  When I was growing up, I never even imagined that some mentally-imbalanced individual or a group of Islamic terrorists would ever attempt to attack a church service that I was attending, but times have changed.  There have been more mass shootings in America during the presidency of Barack Obama than under the previous four presidents combined, and the primary target of the Islamic terrorists in San Bernardino was a Messianic Christian.  The shooters in San Bernardino could have very easily decided to hunt him down at his place of worship instead of at a workplace Christmas party if they had wanted to.  And we all remember the horrific mass shooting that took place at a church in South Carolina earlier this year.  Our churches are very vulnerable “soft targets”, and Christians all over America are starting to realize that security needs to become a higher priority.

Just like schools, malls, movie theaters, concert halls and sporting events, churches are places where large numbers of people gather and where security is typically minimal.  As Christmas approaches, FEMA is holding “specialized training” for churches that includes training for “active shooter incidents”…

Christian churches have been refining their security plans ahead of receiving some of their largest crowds of the year for Christmas.

The Federal Emergency Management Agency has been holding specialized training for congregations for “all hazards, including active shooter incidents.”

If Islamic terrorists were to even just hit one or two of our churches, attendance all across America would immediately plummet.  Nobody wants to feel like they are taking their family to a place of danger, and so that is the power of random attacks like the ones that we recently witnessed in Paris.  If terrorists can make us feel that they could strike anywhere and at any time, the panic and fear that will create will fundamentally change the way that we go about doing things.

Just look at what is already happening.  Church greeters are already being trained to “feel for weapons” as they are hugging people coming in the front door…

Christian churches have been refining their security plans ahead of receiving some of their largest crowds of the year for Christmas. On a FEMA webinar last Wednesday on protecting houses of worship, the chief security executive at The Potter’s House, the Rev. TD Jakes’ megachurch in Dallas, gave tips about behavior that should raise concern, such as a congregant arriving in a long coat in hot weather. If needed, church greeters could give a hug and feel for weapons, said the executive, Sean Smith.

And at one Catholic congregation in North Carolina, backpacks, baby strollers and diaper bags have been banned from worship areas…

In Charlotte, North Carolina, St. Matthew Roman Catholic Church, which draws about 30,000 worshippers to its weekend Masses, this month alerted parishioners to beefed-up security, such as uniformed and plain-clothes police officers at services, and a ban on backpacks, baby strollers and diaper bags in worship areas.

So what is next?

Will we soon have the TSA groping us when we arrive for Sunday school?

Personally, I believe that we are going to see some things that were once unthinkable in the years ahead.  For decades, we have all been able to go to worship services without even thinking twice about our safety.  But now we live in a very different world.

At one time, it was actually quite common for people to bring guns to church.  In fact, a 1631 Virginia law actually required men to “bring their pieces to church”…

It used to be the American way. For example, a 1631 law in Virginia required citizens to own firearms, to engage in practice with them, and to do so publicly on holy days. It demanded that the people “bring their pieces to the church.” Somewhere along the line we have lost this mindset. Today the ideas of church and arms are assumed to be at odds, as if loving your neighbor has nothing to do with the preservation and defense of life and property.

And now we are starting to see a resurgence of guns in church.  The following comes from Time Magazine…

But increasingly, churchgoers are able to pack heat in the pews if they wish. A number of states have recently passed laws allowing concealed weapons in churches, including Arkansas, Louisiana, Illinois and North Dakota. Bryan Crosswhite, president of 2AO, an organization that advocates for Second Amendment rights, says that roughly 25 states allow concealed carry weapons in churches. But after the shooting in Charleston, his group is pushing for more states to open up their churches to firearms.

“Churches are often gun-free zones,” Crosswhite says. “That makes them a major target for those who go to worship. In most churches, the congregation has their back to the doors. People could walk right in and shoot so many people if you don’t have a plan in place.”

To a lot of people, this may sound very odd.  But if a crazy person or a group of Islamic terrorists decide to attack your church one Sunday, would you rather have a congregation that is armed or one that is entirely disarmed?

For years, Barack Obama and his minions have been pushing their gun control agenda and have been promising that they know how to keep us safe.  But what have their efforts actually accomplished?  I like how my friend Mac Slavo recently put it…

All the while the Obama administration continues to push a gun control agenda, while putting a wide security net over the personal communication and activities of the American people in an effort to convince us that we are being protected. The San Bernardino terrorists were not only admitted into the United States after having pledged support for Islamic terrorism proving what a joke Obama’s vetting process really is, but an investigation into their activities was halted due to concerns over racial and/or religious profiling. Moreover, despite all of the existing Federal and California State gun restrictions, they were somehow able to acquire firearms.

For the acute observer, this suggests that pretty much all of the trillions of dollar spent on Homeland security over the last 15 years have done almost nothing to make us any safer.

We live in a world that is becoming increasingly unstable, and the terror and the violence that are already plaguing much of the rest of the planet are now coming here.

Whether we like it or not, we are going to have to deal with certain dangers that would have been unimaginable to previous generations.

The truth is that it is only a matter of time before the next church attack happens.

If it happens at your church, how will you and your congregation deal with it?

That is something that we all need to be thinking about.