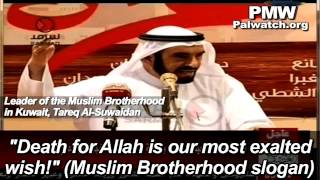 A Muslim Brotherhood leader in Kuwait, Tareq Al-Suwaidan, said Muslims “hate” the sons of Zion. He called for Muslim mothers to nurse their infants on this hatred and to plant it in Muslim children’s “souls,” so that the new generation “will erase the (sons of Zion) from the face of the earth.” Last week, Palestinian Media Watch documented a similar Hamas sermon calling for the extermination of Jews.

The Kuwaiti Muslim Brotherhood speaker also reiterated the MB belief that death for Allah – Shahada (Martyrdom) – is the loftiest goal a Muslim can achieve. Turning to residents of Gaza he said:

“Death for Allah is the highest wish…
you received the death you wanted.”

This speech, which was originally broadcast on July 14th on Sarmad TV (Kuwait), was rebroadcast by Hamas two days ago on Al-Aqsa TV. Hamas defines itself as “one of the wings of Moslem Brotherhood…” [Hamas Charter, Article 2]

1 thought on “Hamas TV: Every Muslim mother ‘must nurse her children on hatred of the sons of Zion’”