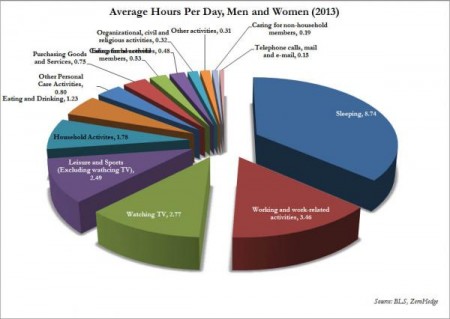 It was about a year ago when we were surprised to learn that when it comes to spending their average day, American adults (15+, male and female), the typical American spent just over 3 hours per day working, less than the time allotted to eating/drinking and watching TV. The most time-consuming activity, not surprisingly, was sleep, taking up just over a third of the day, following by leisure and sports to which Americans devote over 5 hours a day.

This week the BLS released its latest “American Time Use Survey” and unlike last year, this time we were not surprised to learn that not only are Americans far more preoccupied with sleeping and watching TV than working, but they have never slept more and worked less in the past decade. Perhaps in addition to obesity, the ongoing deterioration in the fundamentals of the US economy, already crushed by the Fed’s central planning capital misallocation, may have something to do with this latest disturbing trend. Just perhaps.

1 thought on “How Americans Spend Their Time: More Than Twice As Much Sleep As Work”