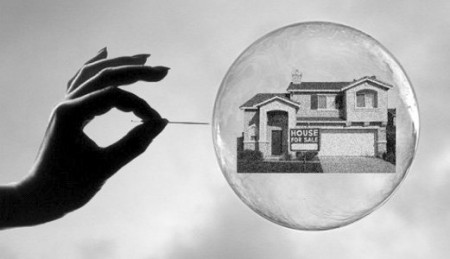 Mortgage applications have been falling steadily for over a year

Homebuilders may be optimistic on the housing front, but the rest of us shouldn’t be. It seems they always get ahead of themselves with optimism, and then end up holding the bag, like when the last crash happened.

In the few years leading up to 2007, I remember the plethora of new developments going up all around where I live in south Florida, with brightly-colored sales flags and dozens of beautifully decorated model homes in endless developments.

On the weekends, just for entertainment, I’d spend a whole afternoon looking through them, faking that I was a legitimate buyer. Elaborately decorated, the spectacle of these $300,000 to million dollar marvels was breathtaking, as I was garnering free home-decorating ideas.

With no expense spared, these homes were decorating fantasies; from breath-taking chandeliers to  gorgeous pools with elaborate waterfalls cascading over huge rock displays. As you ambled from one house to another,  even “fake” rocks outside piped upbeat music. It was a glorious time…

And then the crash hit – BOOM! Prices literally fell 50% or more, seemingly overnight. The nightmare of the housing crash which heralded in the Great Recession began. Now, some experts say another housing crash is looming.

Young people, specifically millennials, are not buying homes. Simply put, they don’t have the money. Many are saddled with high student loan debts and they are experiencing much higher unemployment rates than the older baby boom generation.

Because of their financial woes, 31% of 18-34 year-olds are forced to live with their parents. They are considered a key demographic for first-time home buyers. And it’s not that the rest of the population can afford a down payment either, because wages are down across the board.In addition, the following data points to a downturn in the housing market:

Joshua Pollard, who in February 2005-2013, was Vice President of US Housing at Goldman Sachs, is so concerned, he has submitted a report to the President. (Not sure why he thinks he cares, but anyway…)

In his report released on September 17,  Pollard has forecasted an imminent 15% decline in home prices over the next three years. In the report he states,

House prices are 12% overvalued today. They have already started to decline.
Today’s mis-valuation matches the excess of 2006-07, just before the Great Recession. Respectfully, the United States can not afford another housing driven recession…
5 of the last 7 US recessions were led by a weakening housing market…
I am lamentably confident that home prices will fall by 15% within three years.”

And on another sour note, I present Harry Dent’s analysis. Dent writes an economic newsletter that reviews the economy in the US and around the world through demographic trends focusing on predictable consumer spending patterns, as well as financial markets, and has written nine books, of which two recent ones have been bestsellers.

“Don’t even think about buying a home (or worse an office) until at least early 2017.”

From his latest book The Demographic Cliff, Harry Dent says,

“In Chapter 3 of The Demographic Cliff, I explain why the housing market will never be the same in this post-bubble era. We’re approaching the point when there will be more sellers from the aging of the massive baby boom generation than younger buyers from the millennial generation that peak between age 37 and 41.

The numbers are similar to workforce growth where I subtract retirees from new tenants. For housing, I subtract the sellers at age 79 from the peak buyers at age 41 and then I can calculate “net” demand for housing for decades into the future.

Net demand has been falling since 2000, despite a slight bounce up in 2014. That small spike was almost in line with the slight rebound home prices had in 2012.

Once we slide into 2015, it will fall again and hit negative net demand from 2029 to 2039. Once there are literally more sellers than buyers, we won’t need any new homes built!

Housing should slow from 2015 forward — and economists are more confident than ever that we are in a sustainable recovery. The most affluent households also peak this year and will go off the “demographic cliff” like the average household did after 2007.

“Bubbles tend to go back to where they started or a bit lower.
Real estate prices will fall at least 40% from where they are now.
Don’t even think about buying a home (or worse an office) until at least early 2017.
Let the coming stock crash and depression see its first and likely worst phase.”

So what’s all this talk about the great housing market? Yes, housing has recovered significantly since the housing crash of 2007, but is now poised for another similar crash, as all economic signs point towards a continuing economic decline.

If you are considering buying a home now, it is probably not a good move, unless it is a foreclosure or a short sale, and a REALLY good deal. If a crash occurs, housing prices could fall by 15%-40% or more in the next couple of years.

2 thoughts on “Is Another Housing Crash Imminent?”