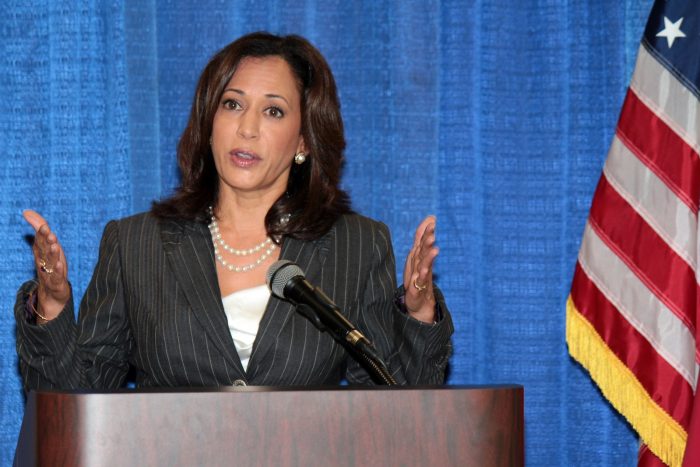 It seems like virtually every major Democratic politician in the entire country is at least considering running for president, and a bunch of them have already officially entered the race, so why is the mainstream media pushing Kamala Harris so hard? According to Real Clear Politics, Kamala Harris has not gotten more than single digit support in any of the 11 major polls for the Democratic nomination that have been conducted so far. And at this point, her average of just 5.0 percent support in those polls puts her in fourth place in this race. But if you listen to the mainstream media, they are constantly using terms such as “leading contender” and “frontrunner” to describe her. In recent days she has been getting more media attention than all of the other declared Democratic candidates combined, and that makes one wonder what is really going on behind the scenes.

On Monday, I was doing some research on the Internet when I noticed an ad for a CNN town hall featuring Kamala Harris.

And sure enough, CNN had given Kamala Harris her very own town hall in a prime time slot, and they had left all of the other candidates out.

Then after the town hall was over, CNN published a glowing editorial about the town hall entitled “It’s Kamala Harris’ race right now”…

There’s a long way to go before the Democratic Party picks its nominee for the presidency. But this week, it’s Kamala Harris’ race.

The senator from California’s performance at a CNN town hall Monday night solidified her standing as a leading contender. She was fluid and engaging, striking that always-tough balance (for women, at least) of being both authoritative and warm. She also took solidly left positions on a slew of important topics.

Ladies and gentlemen, that is what you call a propaganda piece.

There are seven other Democrats that have already officially announced that they are running. So where were they, and why is Kamala Harris being singled out for such favorable treatment?

She has been dubbed “the next Obama” or the “female Obama” by many on the left, and just like we witnessed in 2008, the mainstream media can’t help but gush about how wonderful she is.

Following her town hall performance on Monday night, CNN boldly declared that “Harris pushed to the front of the pack”…

The Democratic bench is deep, and this primary will be a contentious one for the best reason: because there are so many excellent, qualified candidates. The primary is a long way away, and there will no doubt be significant ebbs and flows as some candidates surge and others retreat. But on Monday night, Harris pushed to the front of the pack.

Of course that is a lot easier to do when none of the other candidates are on the stage.

So exactly what does Kamala Harris stand for?

Well, during the town hall on Monday night she expressed her support for a government-run “Medicare for all” system…

‘We need to have Medicare for all. That’s just the bottom line,’ Harris said during a CNN town hall event, declaring that she feels ‘very strongly’ about it.

‘The idea is that everyone gets access to medical care, and you don’t have to go through the process of going through an insurance company, having them give you approval, going through the paperwork, all of the delay that may require,’ she explained, concluding that private insurers should not be part of the system.

‘Let’s eliminate all of that. Let’s move on,’ said Harris.

But she didn’t stop there. In addition to getting rid of health insurance companies, she is also in favor of banning a whole bunch of other things…

But the queen of the ban was just getting starting. Along with banning private health insurance, Harris also wants to ban for-profit colleges, assault weapons, fossil fuels, personal cars, and presumably members of the Knights of Columbus serving as federal judges.

She also voiced her support for AOC’s “Green New Deal”, and if that is ever implemented it will completely turn our society upside down (and not in a good way) in just 10 years…

“I support a Green New Deal, and I will tell you why: Climate change is an existential threat to us, and we have got to deal with the reality of it,” she said when asked by an audience member about Rep. Alexandria Ocasio-Cortez’s radical “Green New Deal.”

The plan by the freshman congresswoman calls for wiping the fossil fuel industry out of existence and replacing all of America’s energy production with renewables within 10 years.

On top of everything else, she also wants to grab your guns…

“You can be in favor of the Second Amendment and also understand that there is no reason in a civil society that we have assault weapons around communities that can kill babies and police officers,” Kamala Harris says of guns in America.

In essence, Harris has attempted to stake her claim as the most progressive candidate in a Democratic field that will be absolutely teeming with them.

Cool, let’s vote for her! Said nobody with a brain.

And if the mainstream media continues to stay solidly behind her, there is a very good chance that she could be Donald Trump’s opponent in 2020, because right now most Democrats have no idea who they want…

Most Democratic voters can’t name the candidate they want to replace President Donald Trump, a new poll revealed on Tuesday and it also showed the president is vulnerable in his reelection efforts.

When asked whom they would support for the Democratic presidential nomination, 56 percent of self-identified Democrats did not offer a name, a Washington Post-ABC News poll found.

It is being projected that up to 30 Democrats could ultimately enter the race, but most of them don’t have a prayer.

In the end, the candidate that receives the most attention from the mainstream media will probably be the nominee, and right now that candidate is Kamala Harris.