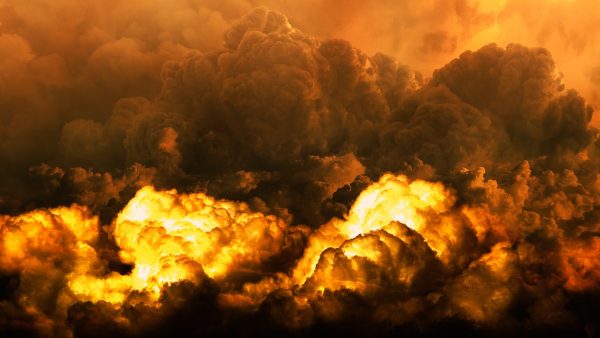 I write this article with a heavy heart. In recent weeks I had come to the conclusion that there probably would not be a war with Iran in 2019, but now I have to admit that I was wrong. U.S. officials were very quick to blame Iran for the attack on two tankers in the Gulf of Oman, and President Trump’s advisers have reportedly been pushing him very hard to strike Iran. President Trump had been hesitant to engage Iran militarily, but now it appears that he is going to give the war hawks in his administration exactly what they want. According to the Jerusalem Post, a bombing campaign is being planned that “will be massive but will be limited to a specific target”…

According to the officials, since Friday, the White House has been holding incessant discussions involving senior military commanders, Pentagon representatives and advisers to President Donald Trump.

The military action under consideration would be an aerial bombardment of an Iranian facility linked to its nuclear program, the officials further claimed.

“The bombing will be massive but will be limited to a specific target,” said a Western diplomat.

If this happens, it will start a war.

Iran is home to more than 81 million people, it is armed to the teeth, and it is the global central hub for Shia Islam.

It would be the biggest war that the United States has fought since World War II, and the Iranians would fight to the death and they would throw everything that they have at us. That would include unleashing all Iranian and Hezbollah operatives in North America to conduct widespread terror operations. Blood would be spilled on a massive scale, and there would be great chaos inside our own nation.

Are we sure that we really want that?

Unfortunately, events are beginning to spin out of control very rapidly now. On Monday, Iran announced that it will surpass the uranium stockpile limit that was established by Obama’s nuclear deal in just 10 days…

“Today the countdown to pass the 300 kilograms reserve of enriched uranium has started and in 10 days time we will pass this limit,” said Iran’s atomic energy organisation spokesman Behrouz Kamalvandi.

“This is based on the Articles 26 and 36 of the (nuclear deal), and will be reversed once other parties live up to their commitments.”

Kamalvandi acknowledged the country has already QUADRUPLED its production of low-enriched uranium.

Needless to say, that is likely to accelerate U.S. military planning.

And very shortly after Iran announced this, U.S. Defense Secretary Patrick Shanahan released a statement announcing that 1,000 more U.S. troops are being sent to the Middle East…

The United States is sending 1,000 additional troops to the Middle East, amid rising tensions between the U.S. and Iran. The decision follows last week’s attack on two tankers in the Gulf of Oman that the U.S. blamed on Tehran, with the Pentagon releasing new images on Monday that officials said show Iranian Islamic Revolutionary Guard Corps (IRGC) members removing an unexploded mine from one of the ship’s hulls.

“In response to a request from the U.S. Central Command (CENTCOM) for additional forces, and with the advice of the Chairman of the Joint Chiefs of Staff and in consultation with the White House, I have authorized approximately 1,000 additional troops for defensive purposes to address air, naval, and ground-based threats in the Middle East,” acting Defense Secretary Patrick Shanahan said in a statement on Monday.

Sending troops to the Middle East will raise tensions, but it won’t start a war.

However, bombing Iran will start a war, and there seems to be a growing consensus in Washington that it needs to be done. For example, just consider the words of Senator Tom Cotton…

As the Trump administration works to convince allies that Iran was responsible for last week’s attack on two tankers near the Persian Gulf, Sen. Tom Cotton (R-Ark.) said Sunday that “this unprovoked attack on commercial shipping warrants retaliatory military strikes.”

“The fastest way to get the fire and fury of the U.S. military unleashed on you is to interfere with the freedom of navigation on the open seas and in the air,” Cotton told CBS’ “Face the Nation.”

Unfortunately, most Americans don’t seem to understand that this would not be anything like our wars in Iraq and Afghanistan.

Iran has been preparing for a military confrontation with the west for decades, and many are convinced that their weapons programs are much more advanced than we have been led to believe.

As our friends at ANP have pointed out, back in 2016 a former director of the CIA and four other formerly high ranking U.S. officials co-authored an editorial in which they made the claim that Iran already has nuclear weapons…

We assess, from U.N. International Atomic Energy Agency reports and other sources, that Iran probably already has nuclear weapons. Over 13 years ago, prior to 2003, Iran was manufacturing nuclear-weapon components, like bridge-wire detonators and neutron initiators, performing non-fissile explosive experiments of an implosion nuclear device, and working on the design of a nuclear warhead for the Shahab-III missile.

Thirteen years ago Iran was already a threshold nuclear-missile state. It is implausible that Iran suspended its program for over a decade for a nuclear deal with President Obama.

Ambassador R. James Woolsey, former director of central intelligence, is the chancellor of the Institute of World Politics and the chairman of the Leadership Council of the Foundation for Defense of Democracies; William R. Graham was President Reagan’s science adviser, and acting administrator of NASA, and is the chairman of the Congressional EMP Commission; Ambassador Henry Cooper was the director of the Strategic Defense Initiative and chief negotiator at the Defense and Space Talks with the USSR; Fritz Ermarth was chairman of the National Intelligence Council; Peter Vincent Pry is executive director of the EMP Task Force on National and Homeland Security and served in the Congressional Strategic Posture Commission, the House Armed Services Committee, and the CIA.

Yes, it is possible that they could be wrong.

But what if they are right?

Could we be walking into a war against a bunch of apocalyptic nutjobs that already have nuclear weapons and wouldn’t be afraid to use them against us and our allies?

There is no way that we should be rushing into a war with Iran, because the consequences of such a war could be unthinkable.

We have an extremely limited amount of time to stop this conflict from happening, because once the missiles start flying there will be no turning back.

The clock is ticking, and one wrong move could spark World War 3. Let us pray that President Trump makes the right decisions, because the fate of countless lives is now in his hands.