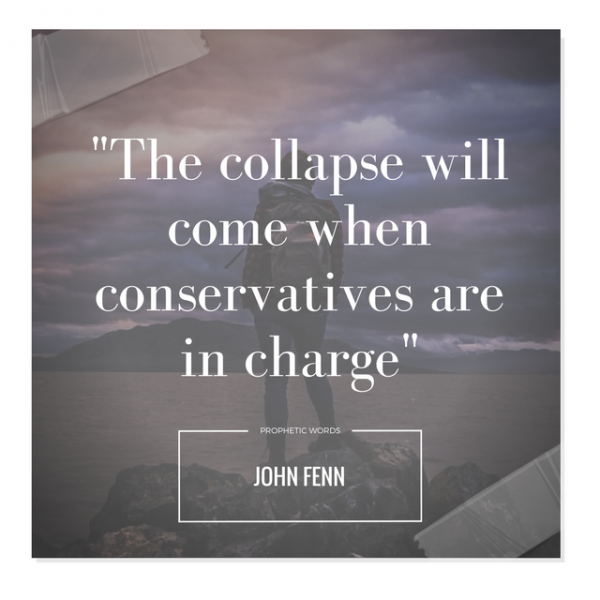 Almost a year and a half before Donald Trump was elected, John Fenn was shown by the Lord that “the collapse will come when conservatives are in charge”.  When John Fenn originally released this in July 2015, I don’t think that people really understood the significance of what he was shown.  The following is from the article that my wife previously posted about this startling prophecy…

This is an excerpt from a prophecy John Fenn released in his newsletter in July, 2015.  You can read the full prophecy at yeshuasarmy.com

“Remember when the Father told you in 2005 that in 10 years, this year, you wouldn’t recognize the country for what it had become? I tell you the truth that in 2 years you won’t recognize it again. What took 10 years to change this nation will be done, and much more, in 2 years time, and this time the whole world is involved and won’t be recognized in 2 years. So what do you think is the reason all these people suddenly have clarity about what is important to them, and to make them willing to become serious about their walk with Me?

“As happens so often, it is a combination of things in the natural and things spiritual coming together that turn a person’s heart towards me. The collapse will come when conservatives are in charge, and they will be blamed for the nation’s ills, though what will happen is actually the result of poor decisions made by many before them. Conservatives, Christians, and Jews will be blamed for standing in the way of progress; then will come to pass the words I told you in 2003:

‘Laws that are designed to protect my people will one day be used against them.’ US culture is about to change in ways many thought could never happen. Remember what I told you in 2005, that in 10 years you won’t recognize your country for what it has become, and truly that has come to pass. And remember the other things I told you, for they will continue to gain momentum.” (At the time the Father told me about the changes from 2005 to 2015, the Lord added information about the moral and spiritual state of our nation, which I’ve not shared, some of which have become self-evident to anyone watching the news.)

“Remember when I told you the nation would face disasters natural, political, economic, and more, like a conspiracy of events and circumstances one after another, which will overwhelm the nation. Those days are soon coming, but those are days when many of those who know me and are walking in what I’ve been saying to them, and as I’ve said to you, will prosper and be lights in a dark world. They are the ones who will not be shaken, but will walk as giants in the land, for many will rise and be blessed in many areas during this time and become leaders to those around them. House church will become THE way of doing church in the US and much of the world, and one of the marked differences in Christians you’ll be able to discern, is those caught up in fear, and those who are walking circumspectly in peace.”

“You know history, that historically it has been persecution and economic hardship that have separated true disciples from those pretending, and so it will be in the days soon approaching, nearly all over the world, but with many pockets of peace and safe havens. What you are doing is one of those safe havens, defined not geographically, but spiritually, and receiving my favor and protection, for those who move with the Spirit will make their way forward in safety, though all around them there will be people unable to control what is happening to them. Times will be that people must have wisdom and revelation from the Father to make their way through life, to side-step obstacles and receive His provision.”

“Priorities for many are about to shift from things ‘out there’ to what is truly important, and many will lose many of the things they’ve gathered to themselves of this world. Many will repent of their adultery with the world and return to Me, their first love, but it will take great hardship for many as their spiritual nakedness* is exposed.”

(*See Revelation 3:17-18 especially, for the naked and lukewarm Laodecian church, which thought it was righteous in its lukewarm-ness because it was rich and had material possessions and said they had need of nothing; but He told them they were so blind they had no idea they were poor, blind, and naked.)

“The great error many are in even now is that they are looking for a single event that will define the moment, not realizing it is a process taking place over time with a few noticeable events as part of the process, and in fact these processes are already at work. Because they are looking for a single event many are missing the larger process at work. All things are connected, and even large events are connected to a larger whole. Do not become like those who run to and fro crying out for a single event to change the world, for the transformational process is already happening.”

About John Fenn: John Fenn and his wife Barb have spent over 37+ years walking with the Lord. He is the author of “Pursuing the Seasons of God” and “Leaving the Church to Find God“. John has seen many visitations from Jesus in which He has taught John many keys of walking with the Father and in the timing of the Spirit. Find the Fenn’s ministry at supernaturalhousechurch.org