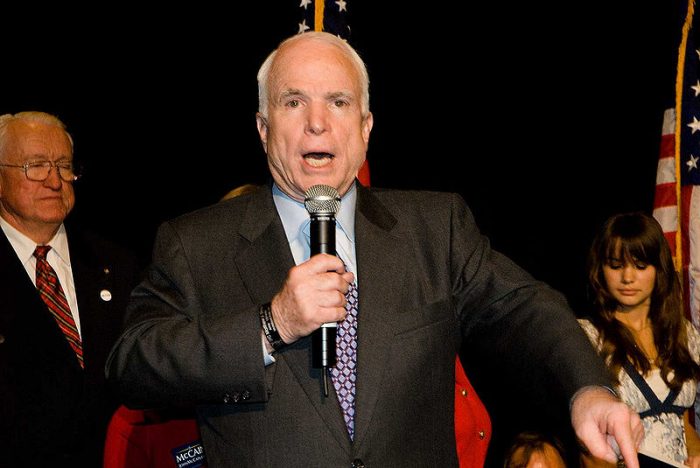 Does America really need a permanent ruling class of career politicians?  According to Real Clear Politics, right now Congress has an average approval rating of just 18.8 percent.  It is an institution that is dominated by politicians that are able to keep winning elections over and over again because they are extremely good at raising money.  And our permanent ruling class of politicians has learned that it greatly pays to pander to the special interests and the wealthy donors that are able to inject large amounts of cash into their campaigns.  This incestuous system produces many incumbents that are almost unbeatable, and the result is that some of these Congress critters end up staying in Washington much, much longer than they should.

On Thursday, we witnessed a perfect example of this.  Senator John McCain’s incoherent questioning of James Comey got so much attention on social media that USA Today did a whole story about it…

The Arizona Republican spent most of his allotted time for questioning Comey to ask about the FBI investigation into Hillary Clinton’s use of a private email server while she was secretary of State. But his questioning wasn’t exactly coming out in the most coherent manner.

“So she was clearly involved in this whole situation where, fake news — as you just described it, is a big deal — took place,” McCain said, referring to Clinton. “You’re going to have to help me out here. In other words, we’re complete, the investigation of anything former Secretary Clinton had to do with the campaign is over, and we don’t have to worry about it anymore?”

I would have been confused too.

No matter what you may think of McCain, it is clear that his ability to think clearly has gone way downhill.  In the aftermath of the hearing, McCain released a statement in which he blamed his incoherence on staying up late to watch baseball games…

“I get the sense from Twitter that my line of questioning today went over people’s heads. Maybe going forward, I shouldn’t stay up late watching the Diamondbacks night games.”

Of course there are many Democrats that are in the exact same boat.  For some reason, House Minority Leader Nancy Pelosi has a really hard time remembering Donald Trump’s name…

For at least the third time, House Minority Leader Nancy Pelosi referred to the current president as George W. Bush.

Talking about her battles with Republicans over abortion, Pelosi said, “For decades I’ve served in Congress and for decades I’ve had to fight the Republicans’ opposition to birth control, contraception and family planning.

“They do not believe in it,” Pelosi declared at The Commonwealth Club in San Francisco. “And a lot of those people voted for George— for, what’s his name?” she asked, apparently struggling to remember President Trump’s name.

And just recently, Pelosi could barely get through a 7 minute speech to Refugees International…

She botched country names as she read them from her notes.

“With the specter of famine looming in, over northeast Nigeria, Somalia, south “Sudon,” and “Yuma — Yamen,” she said, flubbing “Yemen.”

Pelosi asserted cutting the foreign aid budget would “only deepen the crisis fighting — facing the children.”

“Children, America, children need America to be their champion,” she said moments later.

Pelosi thanked Refugees International for “channeling — challenging us to honor our values.”

Just over 7 minutes after she started, Pelosi thanked the group for the invitation, stood and stared awkwardly, then made her way off the stage.

We end up with politicians like this because the system makes it nearly impossible to conduct successful primary challenges against incumbents.  And once the general election comes, most areas of the country lean so far in one direction or the other that the candidate from the other party doesn’t stand a chance.

And to ensure that their “political careers” keep going, most members of Congress never stop raising money for their next campaigns.  In his new book entitled “Giant Of The Senate”, Senator Al Franken admits that he often spends several hours a day on the phone raising money…

“It’s not uncommon to have three straight hours of call time scheduled as part of your day. … It’s brutal.”

This is why I am proposing that we limit all members of the House and all members of the Senate to just one term.  If there were no re-election campaigns to raise money for, perhaps they could spend their time doing the jobs that we elected them to do in the first place.

This would be one of the fastest ways that we could clean up Washington.  Special interests and big donors would lose their ability to legally bribe members of Congress by donating to their next campaigns.  And instead of a permanent ruling class of career politicians, we could return to the days of actually having citizen representatives.

So other than members of Congress, who else would be against term limits?

Well, perhaps unsurprisingly I did find one article in the Washington Post that was against the idea…

Here’s a plan that is sure to improve the quality of your local hospital: Fire all the doctors and nurses with nine to 12 years of experience. Just kick them all out. Or why don’t we fire every Apple software engineer who has been at the company that long? That’ll surely yield better iPhones. Or fire every Post reporter with a decade under his or her belt.

No? Sound crazy? I agree. Those are terrible ideas.

If Congress was doing a good job, there may be some merit to that argument.

But at this point the American people are so universally dissatisfied with Congress that it is clear that something must be done.

So we should definitely encourage those that love liberty and freedom to challenge corrupt career politicians all over America in 2018, but we should also push very hard for term limits on every level of government.

It won’t be easy to get them, but just about anything that is worth doing in life is going to take some hard work.