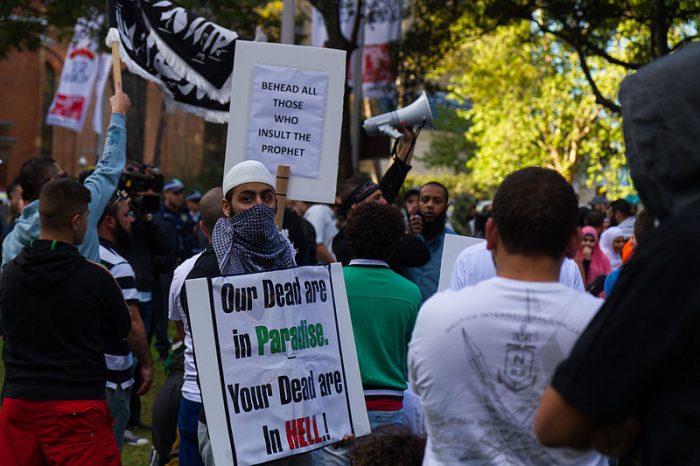 (By Whitney Webb of TrueActivist.com) Arguably one of the most controversial moves put into practice by the fledgling Trump administration was the so-called “Muslim ban.” While the “ban” is really a temporary 90-day injunction on refugee arrivals and citizens from 7 Muslim-majority states, it has been interpreted by many in mainstream media and among Trump’s detractors as Islamophobic and racist in nature. In contrast, Trump, along with his supporters, argue that the move is a necessary step as an “open door” immigration policy poses a direct threat to national security.

Though Trump’s policy has generated backlash from within the U.S. and from several international leaders, new research suggests that Trump’s “Muslim ban” would be welcomed with open arms by a majority of Europeans. A new, massive poll of more than 10,000 people from 10 European Union member nations found that a strong majority of Europeans would like to see immigration from Muslim-majority nations end.

In the survey – conducted by Chatham House – respondents were asked to what extent they agreed or disagreed with the following statement: “All further migration from mainly Muslim countries should be stopped.” The results of the poll found that, overall, 55% of Europeans from these 10 nations agreed that all further migration from Muslim-majority countries needs to stop. In contrast, 25% neither agreed nor disagreed while only 20% disagreed. In most countries, a strong majority agreed with the statement such as Poland (71%), Austria (63%), France (61%) and Germany (53%). Only two nations did not have a majority agreeing with the statement: the United Kingdom (47%) and Spain (41%). Despite that, not a single country had more than 32% disagree with the view that Muslim immigration should be halted. The survey also showed some major demographic factors were related to one’s view on Muslim immigration. For instance, younger people and college-educated adults were more likely to embrace Muslim immigration than their older or less-educated counterparts. In addition, those living in rural, less-urbanized areas were more likely to oppose Muslim-majority immigration than city dwellers. Chatham House also commented that the attitudes expressed in this latest survey seem to coincide with a 2016 Pew survey of European nations which was used to gauge whether Europeans have a favorable or unfavorable view of Islam. Indeed, many of the countries where a majority of respondents opposed Muslim-majority migration were also shown to hold largely unfavorable views of Islam. However, some notable exceptions included France where only 29% were found to view Islam unfavorably while 61% oppose the continuation of current Muslim immigration policy.

Regardless of which position is “right” or “wrong,” the results indicate a shifting political climate in Europe, one that is highly likely to favor right-wing, populist candidates. The upcoming French presidential election will likely be a major game-changer as the current front-runner, Marine Le Pen of the National Front, has campaigned on immediately halting immigration from certain Muslim-majority nations. Should Le Pen secure an electoral victory in the upcoming election, it could set off a domino effect as politicians espousing similar ideologies have been gaining traction in other European nations such as the Netherlands, Italy, and Germany. The growth and potential success of the Europe’s resurgent populism and nationalism also spells the likely end of the European Union as many of the same politicians and political movements opposing immigration from Muslim-majority nations also support their nations leaving the EU. If this latest poll is any indication, the EU’s days may very well be numbered.