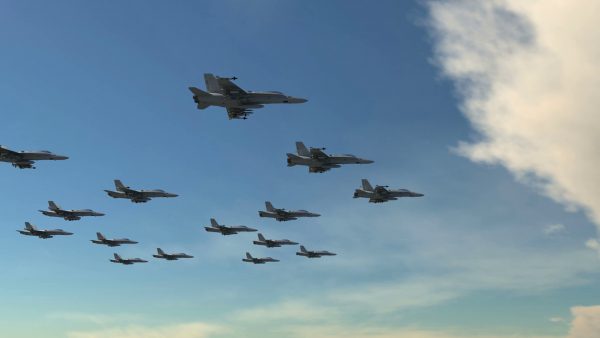 (By Marty Breeden) I began having prophetic dreams from a very early age I remember being 4, 5, 6 ,7 years old and having dreams of the end times.

Often not understanding much of what I saw.

One thing in particular was a dream that I had consistently several times a week, for many years as a young boy.

It was a CONSTANT RECURRING DREAM!!

I would be standing outside looking up to the sky and I would see a large Military Jet fly over.

THEN I would see 2, then 7, then 10, then 20, then 50… and before you knew it, you can no longer EVEN see the skies, because they were completely filled up with fighter aircraft !!!!

Even at that young age, I knew instinctively that this was symbolic of the “End Times”.

As I grew older and stopped having this one particular type dream, I never mentioned it to anyone for over 25 years.

Then after I came to faith in Christ and so had my father, we were outside sitting in the yard and we were discussing end times Bible prophecy and things that would happen at the end of days.

BUT….. as I begin to tell my father about the dream and explain what I saw he stopped me!!!!

I was shocked by this!

What came next was even MORE SHOCKING!

My father then finished the dream that I had with exact explicit details!

EXACTLY what the planes looked like and how there would be 1 and then 5 and then 10 and 20 of them and you could no longer see the sky for the amount of planes !!

My father confided to me that HE TOO had that exact same dream as a young boy for years and years and years, multiple times weekly and like me, had never told anyone about it!!!!!

This cannot possibly be explained logically and was absolutely a God thing!!!

I have always believed and still do, that I will will indeed WITNESS such an event prior to the Return of the Lord!!