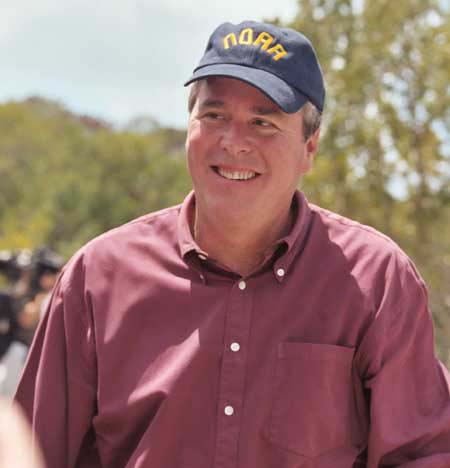 The media have two great loves in life: liberals, and conservative who “grow” and become liberals.  Jeb Bush, who clearly falls in the latter category, was the subject of a fawning piece in the New York Times.  The article starts with a big photo of Jeb doing charity work a month ago (that’s big news now!) and talks about Jeb’s “progression” from “headbanging” conservatism to a “more nuanced approach.”  Yes, Bush calls conservatism “headbanging,” which tells you in just one word what he thinks of conservatism.

Mr. Bush, 61, the former governor of Florida, insists that he will not contort himself to satisfy the ideologues of the Republican Party as he lays the groundwork for a possible presidential run in 2016.

Bush is so selfless!  I haven’t seen anyone this pure in the pages of the New York Times since their last story on Elizabeth Warren.  If I put this article in the laundry with my socks and underwear, do you think they would all come out sparkling clean?