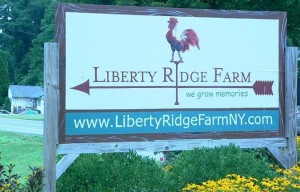 A New York farm has been fined $13,000 by the state Division of Human Rights for declining to host a same-sex ‘wedding’ on their property two years ago, and has been ordered to train their employees to accommodate homosexual ceremonies despite their Christian beliefs. Administrative Law Judge Migdalia Peres fined Liberty Ridge Farms in Schaghticoke $10,000 and ordered that $1,500 each be paid to two lesbians who were turned down by the facility, which also serves as the owners’ home. Liberty Ridge Farms’ owners were also ordered to provide proof that they have trained their employees not to refuse requests from homosexuals. A poster noting that the business is subject to human rights law must also be displayed prominently at the business. As previously reported, Jennie McCarthy and Melisa Erwin of Albany contacted the 50-acre Liberty Ridge Farms in 2012 to schedule their “wedding” ceremony, as the venue regularly hosts weddings and other outings. However, when the owners, Robert and Cynthia Gifford, realized that the two were lesbians, they informed the women that they could not be of assistance.