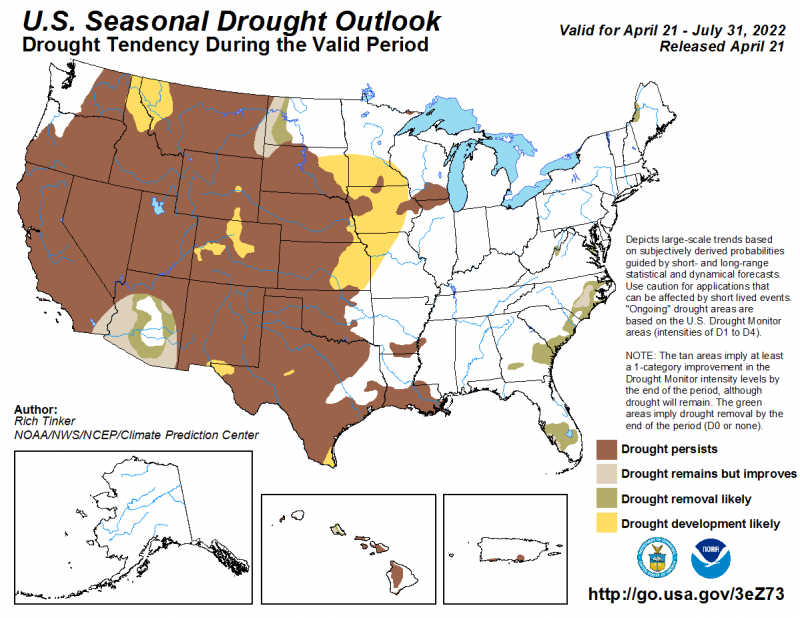 Are you ready for more bad news about our food supply?  In recent weeks, I have extensively covered a confluence of factors which are combining to create a global food crisis of immense size and scope.  But one thing that I haven’t written much about lately is the extraordinary drought in the western half of the United States.  According to the official U.S. Seasonal Drought Outlook that was just released by the National Weather Service, nearly 50 percent of the continental United States will either see drought conditions persist or intensify in the coming months.  This is really troubling news, because drought conditions are already having a dramatic impact on agricultural production.

At this point, the U.S. Department of Agriculture is telling us that just 32 percent of all winter wheat in the U.S. has either a “good” or an “excellent” rating…

Only 32 percent of the winter wheat crop in the United States received a “good” or “excellent” rating from the U.S. Department of Agriculture (USDA), new reports show.

While this represents a slight increase of two points compared to a week ago, the figure is far behind 2021’s 53 percent rating, illustrating just how bad America’s wheat crop is due to persistent drought conditions in many areas.

The reason why so much of our winter wheat is in such poor shape is because of the drought.

It just stretches on month after month, and many farmers in the western half of the country are beyond frustrated with the lack of moisture.

Of course a lack of moisture also creates ideal conditions for wildfires.

According to the National Interagency Fire Center, so far this year a total of 834,238 acres have burned in the United States.

And as I discussed yesterday, a lot of what has been burned within the past few days has been farmland.

Meanwhile, another “pestilence” has broken out on the other side of the globe.  According to an Australian news source, an outbreak of Japanese encephalitis has already spread to more than 60 facilities that raise pigs…

The Department of Agriculture, Water and the Environment is reminding producers to remain vigilant as more than 60 piggeries across four states battle Japanese encephalitis (JEV) outbreaks.

Already this year, three people have died from the virus, and there are more than 60 piggeries with infected herds across New South Wales, Victoria, Queensland and South Australia.

As I have been covering in recent weeks, there are so many reasons why global food production will be way below expectations this year.

This will cause a tremendous shift in the equilibrium between supply and demand, and food prices will go way up.  In fact, the World Bank is projecting that “there will be a staggering 37 percent rise in food costs”…

The US-based World Bank, which provides loans and grants to low and middle-income countries for capital projects, calculates there will be a staggering 37 percent rise in food costs. It said the effect will be ‘magnified for the poor’ who will have to ‘eat less’ and will be left with little money for anything else.

Needless to say, millions of people in the poorest countries of the world won’t have enough to eat at all.

U.S. Senator Roger Marshall recently warned that “a worldwide famine” is on the way, and he is not exaggerating one bit.

In other nations that are not so poor, extreme food inflation will cause a dramatic change in the standard of living.  For example, just consider what is already happening in Argentina…

Welcome to Argentina, where high, nearly uncontrollable inflation—now at an estimated 55.1% over the past year—is as natural as the country’s juicy sirloins and sensual tango shows.

With the rest of the world experiencing higher inflation—byproduct of supply chain crunches, heavy stimulus spending and the war in Ukraine —Argentina offers something of a window to those who fret about just how high inflation will go and what it will mean to their everyday lives.

Thankfully, things are not quite that bad here in the United States just yet, but in certain categories we are seeing price increases that are wildly out of control…

Amid rising inflation, people in the United States are finding that buying a used car is not necessarily a sure way to cut costs, as used car prices have risen 30.4% over the last year.

I feel really bad for anyone that needs to buy a vehicle right now.

This is about the worst time ever to be doing that.

Overall, the inflation nightmare that we are currently enduring is already worse than anything that America went through during the Jimmy Carter era.

But most Americans don’t really grasp the full horror of what is unfolding all around us, because most of the talking heads on television are telling them that everything is going to be just fine.

No, everything is not going to be just fine.

In fact, it won’t be too long before things start getting really, really bad in this country.

But even though conditions are rapidly deteriorating all around us, I am not suggesting that you should wallow in despair.

It is when times are the darkest that the greatest heroes are needed.

Personally, there is no other time in human history that I would have rather lived than right now.

One of the reasons why I strongly encourage my readers to prepare for the chaotic times that are coming is because I want them to thrive during those times.

We were all put here for a reason, and you have a purpose that nobody but you can fulfill.

So do not get depressed that everything seems to be collapsing all around us.

Yes, things will be extremely challenging in the years ahead, but it can also be a time when you come alive like never before as you embrace everything that you were created to be.