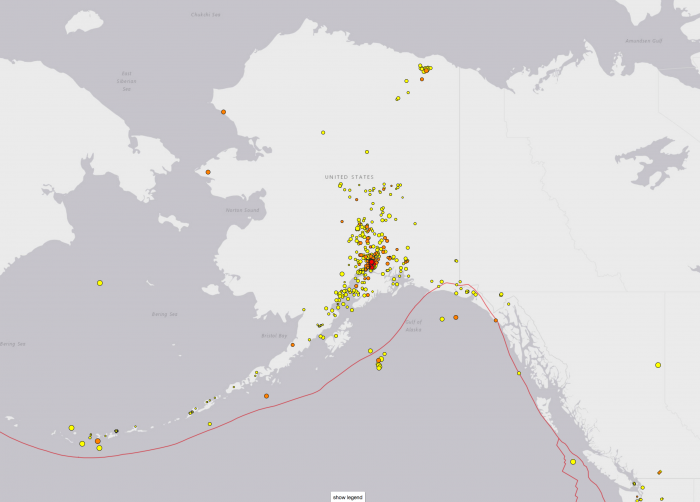 The shaking in Alaska still hasn’t stopped, and that has many residents wondering if the worst is still yet to come. Friday’s magnitude 7.0 earthquake could be felt 400 miles away from Anchorage, and it was the most destructive quake that the city has experienced since 1964. But those living in the region can’t really shift into recovery mode yet because the ground continues to shake. In fact, it is being reported that there have been more than 1,400 aftershocks that have been recorded so far…

Since Friday’s tremor, the strongest to strike The Last Frontier since a 7.9 in the remote Rat Islands in 2014, the U.S. Geological Survey has recorded 166 aftershocks of magnitude 3.0 or higher around Anchorage as of 4:50 p.m. PST Sunday, USGS geophysicist Brad Aagaard told USA TODAY. Earthquakes of 3 or higher are strong enough to be felt.

There have been hundreds of smaller disturbances: 1,406 aftershocks of at least magnitude 1.0.

None of the news reports that I have found include aftershocks that are under magnitude 1.0.

If those were included, how high would the total be?

This is yet another reminder that our planet is becoming increasingly unstable. One resident that has been living in the area for 37 years described the chaos that she experienced when the initial quake hit…

It was the biggest quake she has felt in her 37 years in a region where temblors are common, Dossett said. One aftershock moved her piano a foot and half from the wall.

“It just didn’t stop. It kept going and got louder and louder, and things just fell everywhere — everything off my dressers, off my bookcases, my kitchen cupboard. Just broken glass everywhere.”

But this definitely was not a worst case scenario.

The 1964 Alaska temblor, the second-largest earthquake in the modern record, produced 1,995 times more energy than Friday’s quake. It lasted 4½ minutes and, along with its tsunamis, killed more than 120 people. It was felt all the way to Seattle, where witnesses said they felt the landmark Space Needle swaying.

A later U.S. Geological Survey study found that an area of 185,000 square miles was disrupted. There were areas that dropped as much as eight feet and others rose 38 feet. Barnacles attached to rocks that used to be two feet underwater were suddenly in the open air. A section of downtown Anchorage sank. Underwater landslides in Alaska’s fjords caused tsunamis within minutes of the shaking. Three huge waves washed into Whittier from Prince William Sound within three minutes.

Scientists tell us that someday such a quake will happen again, and if it strikes as close to Anchorage as Friday’s earthquake did, the city will instantly be reduced to a giant pile of rubble.

And it may happen a lot sooner than many were anticipating. Our planet appears to be in great turmoil, and we have been witnessing a lot of extremely unusual seismic activity lately.

For example, on November 11th very strange seismic waves rippled across the entire globe, and scientists still do not understand why it happened. The following comes from National Geographic…

The seismic waves began roughly 15 miles off the shores of Mayotte, a French island sandwiched between Africa and the northern tip of Madagascar. The waves buzzed across Africa, ringing sensors in Zambia, Kenya, and Ethiopia. They traversed vast oceans, humming across Chile, New Zealand, Canada, and even Hawaii nearly 11,000 miles away.

These seismic waves were not like normal earthquake waves, and they lasted for 20 minutes.

What the French Geological Survey (BRGM) called the “atypical very low-frequency signal” was a repeating wave that would register about every 17 seconds and lasted some 20 minutes total. Strangely, nobody felt it.

In addition, it is undeniable that we have witnessed a lot of significant earthquakes in recent months. In fact, in one recent 30 day period the number of global earthquakes was more than 50 percent above normal.

Could something truly unusual be happening to our planet?

Interestingly, as 2018 began Newsweek reported that some geologists were warning that we could see a substantial increase in the number of global earthquakes because the Earth’s rotation has slowed down a little bit…

About four years ago, the Earth’s rotation slowed slightly. Although the decrease was not enough to notice, the Earth’s slower rotation may spark an increase in severe earthquakes for 2018, researchers from University of Colorado Boulder predicted in the fall.

According to the team’s research, which they presented at the Geological Society of America annual meeting in Seattle this October, there may be a trend between slower Earth rotations and more global earthquakes. Over the past 100 years, there was a 25 to 30 percent increase in the number of significant earthquakes associated with a slowdown in the Earth’s rotation.

Were they on to something?

And what happens if the Earth’s rotation slows down even more?

It should also be noted that scientists are telling us that the west coast is overdue for a major earthquake even if you discount any unusual factors. Just check out these numbers…

The USGS predicts that, within the next 30 years, the probability of at least one magnitude-6.7 or higher earthquake is 60 percent in the Los Angeles area and 72 percent in the San Francisco Bay area.

It is just a matter of time before “the Big One” hits the west coast, and it will be a disaster unlike anything that our country has ever seen before.

Unfortunately, for those that do not live in Alaska the earthquake that just happened is already beginning to fade from their memory, and most people simply assume that nothing like that will ever happen where they live.