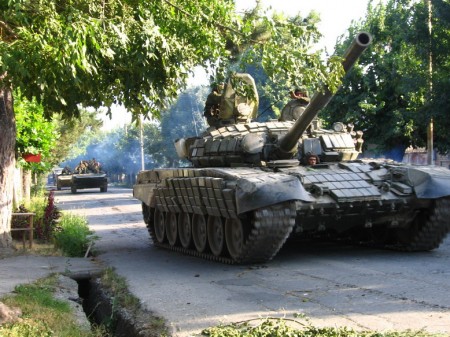 Russia has gone back on its promise to secure its border with Ukraine against further infusions of weapons and fighters, with at least three Russian tanks and several armored vehicles spotted Thursday in the eastern Ukraine town of Snizhnye, a top Ukrainian official said.

“Columns of armored personnel vehicles and artillery have entered through checkpoints seized by terrorists,” Interior Minister Arsen Avakov said at a news conference in Kiev, the capital, citing his nation’s intelligence sources and referring to separatists in the east.

Avakov said Ukrainian troops engaged the Russian convoy and destroyed some of the armor.