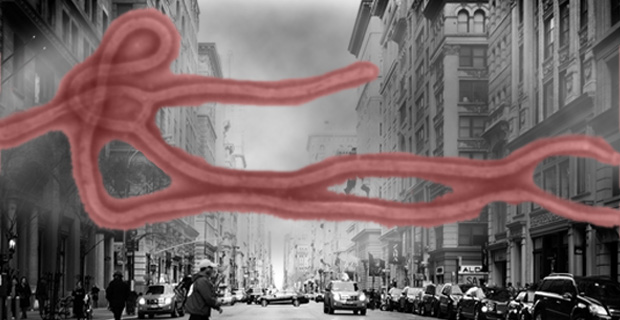 Ebola can spread by air in cold, dry weather common to the U.S. but not West Africa, presenting a “possible, serious threat” to the public, according to two studies by U.S. Army scientists.

After successfully exposing monkeys to airborne Ebola, which “caused a rapidly fatal disease in 4-5 days,” scientists with the U.S. Army Medical Research Institute of Infectious Diseases (USAMRIID) concluded Ebola can spread through air but likely hasn’t in Equatorial Africa because the region is too warm, with temperatures rarely dropping below 65°F.

“We… demonstrated aerosol transmission of Ebola virus at lower temperature and humidity than that normally present in sub-Saharan Africa,” the 1995 study entitled Lethal Experimental Infections of Rhesus Monkeys by Aerosolized Ebola Virus reported. “Ebola virus sensitivity to the high temperatures and humidity in the thatched, mud, and wattle huts shared by infected family members in southern Sudan and northern Zaire may have been a factor limiting aerosol transmission of Ebola virus in the African epidemics.”

“Both elevated temperature and relative humidity have been shown to reduce the aerosol stability of viruses.”