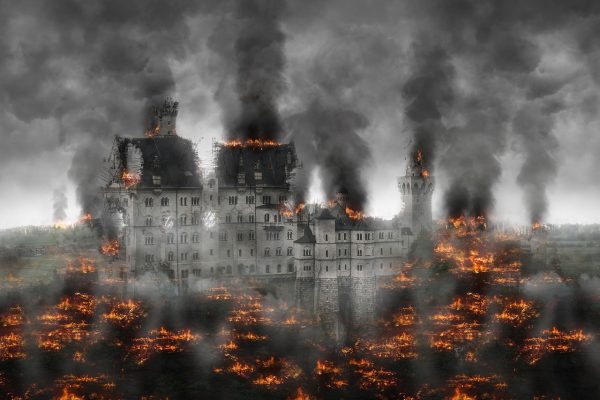 Could it be possible that America’s fate was sealed during the Obama administration? In 2011, TD Hale had a very ominous dream concerning the future of America. In that dream he was shown that Barack Obama would defeat Mitt Romney in the 2012 election, and that is precisely what happened. But he was also shown a number of things that are still in our future. The following account of TD Hale’s dream comes from the website of the Prophecy Club…

National destruction had hit America. There was no food or water. Everyone was crying. I saw grown men crying and holding their families, begging God for mercy. The trees were all knocked over. Limbs and leaves were all missing from the trees except a few of the main large trunk limbs. As I continued to move across America I saw people running, searching for missing loved ones many seemed to be totally out of their minds!

I floated over a large city which looked like Columbus, Ohio. There were riots everywhere. Store windows were broken, everyone was looting the stores. They were not taking T.V.’s and I-pads they were taking food, water, and things to help them survive. I even saw one man shot to death by someone in the crowd.

Moving at the speed of light next, I was standing on the back side of the White House. I heard a voice say, “Look toward the Truman Balcony.” I turned and saw Barak Obama standing on a balcony, holding a shot gun. I heard a loud scream… really loud. I turned my head to see where the scream came from. Flying high in the air above was an eagle it appeared so majestic flying over Washington D.C. (Terry did not know there was a balcony called the “Truman Balcony.”)

I saw Barak Obama point the shot-gun and shoot the eagle out of the air. It fell dead to the ground. Obama smiled and said, “I’ve done it, and I won’t have to deal with this in my administration.” I heard a voice say, “Tell the people this is My will. This is My hand, both upon the generation of the righteous and upon the cursed. The righteous will find their way and know what to do. The cursed will wander around with no compass. The cup is full!”

From that point on I knew that we were coming to a showdown. It was going to be between good and evil. I saw some people gathering into homes that were not destroyed. I saw people having prayer meetings in which they were only praying in the Spirit. I saw others having a home bible study. I saw Bible prophecy DVD’s, CD’s and books from ministers on a table, they were using them as Spiritual food they had stored up to teach them in this time.

I heard a Voice say, “Pick up the mantle of prayer. Cover yourself with it and find you a secret place to cover my servants in prayer. Many eyes have been anointed with a special anointing to see. Others are blinded to My Word. All things will be
revealed in their due course.

A supernatural wave of My Spirit will come over this generation soon. The FINAL voices are in the land to speak one last time. Think it not strange the happenings around you. They must and will come to pass, but I have placed in your hands: the food to sustain you in the months ahead. I have spoken and shown the matter. Tell my servants, saith the Lord, there is coming harsh days ahead!”

As I stood there hearing the voice of God, I saw a very old table in Washington D.C, it looked as if it had been used over many years to sign many important documents in the past. I saw a voting ballot laying on this table with two names on it. It had “Barak Obama” and “Mitt Romney.” I saw a checkmark beside Obama’s name. These words were written at the bottom of the ballot, “For this is the will of the Lord.”

Then I woke up.

“…many seemed to be totally out of their minds!”

The hardships will be so great that the minds of man will not be able to understand it. It will be so hard that men will kill themselves. I will judge through torment, pain and suffering, and will take revenge with great harshness for all sin. The Father has allowed me to avenge my spilled blood.” –Dumitru Duduman, The Savior Returns As Judge, January 24, 1994,
www.handofhelp.com

“I saw Barak Obama point the shot-gun and shoot the eagle out of the air.” The shooting of the Eagle is the first of two judgments upon America spoken of by Dumitru Duduman. At the fall of America slavery will return in America once again.

DAN 7:4 The first was like a lion, and had eagle’s wings: I beheld till the wings thereof were plucked, and it was lifted up from the earth, and made stand upon the feet as a man, and a man’s heart was given to it.

“Pick up the mantle of prayer.”

The man then said, “Tell my people the days are numbered and the sentence has been passed. If they will seek My face and walk in righteousness before Me, I will open their eyes that they may see the danger approach. If they only look to the
approaching danger, they too will be caught up and trampled underfoot. Only in righteousness will they find safety.” — “The Bear Awakes,” Dumitru Duduman April 1997

Seek the Lord your God with all your heart. Those who will be clean, those who will be holy, I will not forget. I will save them,” says the Lord. “The armies of the devil are coming with great fury against those who worship Me, and truly seek
Me. Pray that I may give you strength, so that before the storm comes I may save you and give you the joy.” — “A Call To War”, September 1993

PSA 91:1 He that dwelleth in the secret place of the most High shall abide under the shadow of the Almighty.

DAN 6:10 Now when Daniel knew that the writing was signed, he went into his house; and his windows being open in his chamber toward Jerusalem, he kneeled upon his knees three times a day, and prayed, and gave thanks before his God, as he did aforetime.

“Many eyes have been anointed with a special anointing to see. Others are blinded to My Word.”

16 But blessed are your eyes, for they see: and your ears, for they hear.

“All things will be revealed in their due course.”

DAN 11:35 And some of them of understanding shall fall, to try them, and to purge, and to make them white, even to the time of the end: because it is yet for a time appointed.

“A supernatural wave of My Spirit will come over this generation soon.”

JOE 2:28 And it shall come to pass afterward, that I will pour out my spirit upon all flesh; and your sons and your daughters shall prophesy, your old men shall dream dreams, your young men shall see visions:

29 And also upon the servants and upon the handmaids in those days will I pour out my spirit.

30 And I will shew wonders in the heavens and in the earth, blood, and fire, and pillars of smoke.

31 The sun shall be turned into darkness, and the moon into blood, before the great and terrible day of the LORD come.

32 And it shall come to pass, that whosoever shall call on the name of the LORD shall be delivered:

“The FINAL voices are in the land to speak one last time.”

AMO 3:7 Surely the Lord GOD will do nothing, but he revealeth his secret unto his servants the prophets.

“Think it not strange the happenings around you. They must and will come to pass, but I have placed in your hands: the
food to sustain you in the months ahead.”

1PE 4:12 Beloved, think it not strange concerning the fiery trial which is to try you, as though some strange thing
happened unto you:

13 But rejoice, inasmuch as ye are partakers of Christ’s sufferings; that, when his glory shall be revealed, ye may be glad
also with exceeding joy.

14 If ye be reproached for the name of Christ, happy are ye; for the spirit of glory and of God resteth upon you: on their
part he is evil spoken of, but on your part he is glorified.

“I have spoken and shown the matter.”

DAN 9:23 At the beginning of thy supplications the commandment came forth, and I am come to shew thee; for thou
art greatly beloved: therefore understand the matter, and consider the vision.

“Tell my servants, saith the Lord, there is coming harsh days ahead!”

“Those that live in defilement, that meditate upon evil things, will have no escape. They will not have My protection. I will destroy Babylon,” says the Lord, “Because of the wickedness and blasphemy of this country. Not only here, but wherever there is sin, I will punish it harshly. Only the righteous will I save; some even out of the midst of the fire.” –Dumitru Duduman, “A Call to War” September 1993.

“I saw a voting ballot laying on this table with two names on it. It had “Barak Obama” and “Mitt Romney.” I saw a checkmark beside Obama’s name. These words were written at the bottom of the ballot, “For this is the will of the Lord.”

Barak Obama will be re-elected. During the Obama Administration America will lose her freedom.