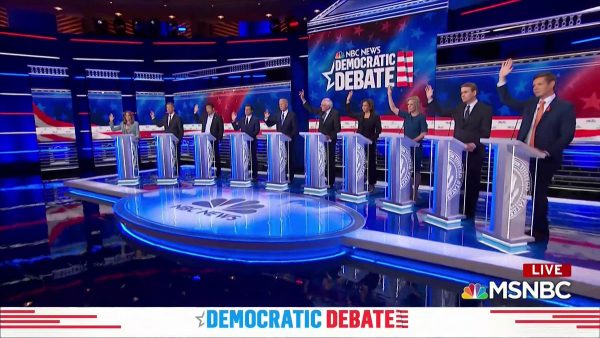 Unlike Wednesday night, the mud was definitely flying when 10 more Democratic presidential candidates took the stage for a nationally televised debate on Thursday night. The most frequent target was former Vice President Joe Biden, and it is going to be very interesting to see how he bounces back from this. Senator Kamala Harris attempted to portray Biden as someone that is racially insensitive, and she delivered the remarks that her team had obviously prepared well in advance with brutal efficiency. But the more the Democrats fight with one another, the better it is going to be for President Trump. And without a doubt, President Trump has got to be encouraged by the incredibly weak lineup of candidates that he saw on Thursday night. The truth is that most of them are more qualified for prison than they are for the White House. The Democrats desperately need to find a champion that can inspire the kind of passion on the left that Barack Obama once did, but right now they don’t have one. They may have more than 20 candidates, but all of them are seriously flawed in one way or another.

Of course with so many candidates in the race, at least the debates should be entertaining. The following are the 10 most memorable quotes from Thursday night’s Democratic presidential debate…

Senator Kamala Harris to Joe Biden: “And I’m going to now direct this at Vice President Biden. I do not believe you are a racist. And I agree with you when you commit yourself to the importance of finding common ground, but I also believe — and it is personal, and it was actually very hurtful to hear you talk about the reputations of two United States senators who built their reputation and career on the segregation of race in this country. And it was not only that, but you also worked with them to oppose busing. And you know, there was a little girl in California who was a part of the second class to integrate her public schools, and she was bused to school every day. And that little girl was me.”

Marianne Williamson: “I’ll tell you one thing: it’s really nice that we’ve got all these plans, but if you think we’re gonna beat Donald Trump by just having all these plans, you’ve got another thing coming.”

Former Colorado Gov. John Hickenlooper: “If we don’t clearly define we are not socialists, the Republicans are going to come at us every way they can and call us socialists.”

Rep. Eric Swalwell: “I was 6-years-old when a presidential candidate came to the California Democratic Convention and said it’s time to pass the torch to a new generation of Americans,” Swalwell said. “That candidate was then-Sen. Joe Biden.”

Senator Kamala Harris: “America does not want to witness a food fight. They want to know how we’re going to put food on their table.”

Mayor Pete Buttigieg: “Our party doesn’t talk about that as much, largely for very good reasons, we are committed to the separation of church and state … But we should call out hypocrisy when we see it. And for a party that associates itself with Christianity, to say that it’s OK that God would smile at the division of families at the hands of federal agents? That God would condone putting children in cages? (It) has lost all claim to ever use religious language again.”

Marianne Williamson: “What Donald Trump has done to these children … is kidnapping, and it is important for us to realize that,” she said. “If you forcibly take a child from their parents’ arms, you are kidnapping them. And if you take a lot of children and you put them in a containment center, thus inflicting chronic trauma upon them, that’s called child abuse. This is collective child abuse. And when this is crime, both of those things are a crime, and if your government does it, that doesn’t make it less of a crime. This is state-sponsored crime.”

Sen. Michael Bennet: “The president has been right to push back on China, but has done it in completely the wrong way. We should mobilize the entire rest of the world who all have a shared interest in pushing back on China’s mercantilist trade policies and I think we can do that.”

Marianne Williamson: “Mr. President, if you’re listening, I want you to hear me, please. You have harnessed fear for political purposes and only love can cast that out.”

But perhaps the most memorable moment from the entire debate didn’t involve any talking at all.

At one point the candidates were asked to “raise your hand if your government plan would provide coverage for undocumented immigrants”, and every single one of them raised a hand.

What in the world is happening to this country? Virtually all of our politicians want to keep taking us in the exact opposite direction from where we should be headed, and if we don’t change course there isn’t going to be any hope for America.

Before I end this article, I want to mention one more thing.

No matter how horrible some of the candidates on the stage were, at least they should have all been treated fairly.

Instead, Joe Biden was given four times as much talking time as Andrew Yang.

Joe Biden tallied up the most speaking time at #DemDebate2, followed by Kamala Harris and Bernie Sanders. https://t.co/asx6rMSQJN pic.twitter.com/ei4hAkSjPs

And 27 full minutes went by before Marianne Williamson was even given an opportunity to speak.

In election cycle after election cycle, the mainstream media always finds a way to make sure that their favored candidates are given an edge in these debates, and it is sickening.

Of course our entire political system is quite sickening at this point, and that is not likely to change any time soon.