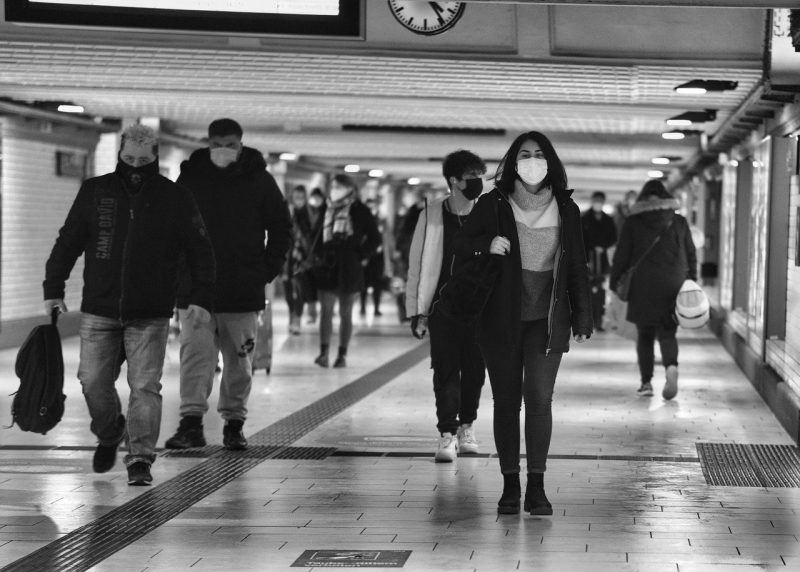 Even though the number of new COVID cases in the United States has been dropping precipitously, a strict new federal mask mandate is being implemented from coast to coast, and it will be enforced by the TSA and other law enforcement authorities.  If you use public transportation without wearing a mask, the “mask police” will find you, and there is a very good chance that you could end up behind bars.  If you find this to be offensive, that is too bad, because in “Amerika” you are not permitted to have dissenting views.  You will either obey or the cold, hard boot of the government will come down on your neck.

Joe Biden originally issued an executive order about mask wearing on January 21st, and now the CDC has issued their own mandate that makes things even stricter.

The new CDC rules just went into effect, and the corporate media is telling us that we better follow them “or else”…

If you haven’t been wearing a facial covering on public transit, airliners or in federal buildings, the federal government is officially telling you to mask-up or else.

An executive order mandating the wearing of masks on transportation vehicles and stations or airport and in federal buildings takes effect at 11:59 p.m., Feb. 1 to slow the spread of coronavirus.

But this order doesn’t just apply to those that are actually using public transportation.

According to the wording of this new order, it applies to anyone “awaiting, boarding, disembarking, or traveling on airplanes, ships, ferries, trains, subways, buses, taxis, and ride-shares as they are traveling into, within, or out of the United States and U.S. territories”.

So if you are sitting at a bus stop, you must wear a mask.

If you just got off a train, you must keep your mask on.

If you plan to ride an Uber, you better be donning a mask throughout the entire process.

In major cities, just about everyone is going to be subject to these new rules at some point.

And just wearing any old mask won’t do.

To comply, your mask must be of a type that is acceptable to the federal government and it must fit well…

The CDC order also says it’s not enough to simply wear a mask—it has to be a certain kind of mask. It can’t be a bandana, scarf, ski mask, or balaclava. It can’t fit too loosely or too tightly. It can’t contain an exhalation valve or be made from knitted fabrics, leather, plastic, or vinyl.

The good news is that there are a few Americans that are exempt from these rules.

For example, if you are under the age of two you do not need to wear a mask.

But everyone else must obey, and TSA workers will be among those that will be deployed to make sure that you are submitting properly…

The Department of Homeland Security said Sunday that Transportation Security Administration workers now have the authority to enforce President Joe Biden’s transportation mask mandate “at TSA screening checkpoints and throughout the commercial and public transportation system.”

Acting Secretary David Pekoske on Sunday signed a Determination of National Emergency, which said the TSA can “take actions consistent with the authorities” of its federal jurisdiction so it can enforce the mask mandate order laid out by the US Centers for Disease Control and Prevention late Friday.

In addition, other federal, state and local authorities will also be expected to enforce the new mask mandate.

Those that are found not to be in compliance will be removed from public transportation, and we are being told that they could also “face federal civil charges and fines”…

Passengers who don’t comply with the face covering requirement face being kicked off whatever they’re riding at the earliest opportunity, the CDC said. They also could face federal civil charges and fines.

But will a mask really keep you from spreading or catching COVID?

Not really.  If you doubt this, just watch this video.

Dr. Fauci keeps telling us that two masks are better than one, but two masks really don’t do that much either.

As I pointed out the other day, if you actually wanted to achieve 99 percent effectiveness, you would need to wear five closely fitting masks simultaneously whenever you are in public.

But of course wearing five masks at the same time would also make it nearly impossible to breathe properly.

Now that this new mask mandate is in place, I have a feeling that it is going to be sticking around for a long time.

We are being told to just accept “the new normal”, and that is precisely what many Americans have decided to do.

The federal government will open its first Covid-19 vaccination sites in California as part of the Biden administration’s push to ramp up the number of Americans receiving shots and reach those most at risk of developing severe illness.

One center will be housed in the Oakland Coliseum where the Oakland Athletics baseball team plays and the other will be on the campus of California State University, Los Angeles. Both will be adjacent to communities hardest hit by the pandemic, said Jeffrey Zients, President Joe Biden’s lead Covid-19 coordinator. The facilities will be staffed mostly with federal employees.

Joe Biden has said that he wants to have 100 million Americans vaccinated in 100 days.

What a nightmare this is going to be.

All over the globe, governments are using the COVID pandemic as an opportunity to take away our God-given freedoms and liberties.

If people don’t stand up and object when they push the envelope, they are just going to keep doing it.

And if they are willing to get this extreme during a relatively minor pandemic, what in the world is our planet going to look like when a major pandemic finally comes along?

I like to remind people that “life as you have known it will never be the same again”, and over the past 12 months the pace of change has greatly accelerated.

They want to turn all of our lives into a dystopian nightmare, and with each passing day they get a little bit closer to that goal.