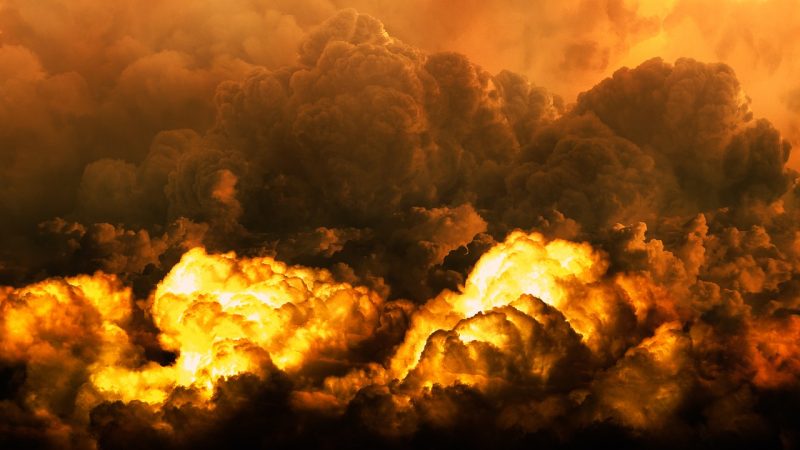 Why is the corporate media in the United States so quiet about this?  As more Russian forces race toward the conflict zone, the Russians have reportedly been hammering Ukrainian positions over the past couple of days.  But I haven’t been able to find a peep about this from the corporate media.  I don’t understand why they aren’t covering this, because this conflict has the potential to start a global war.  Joe Biden is pledging “unwavering support” for Ukraine, and if a Russian invasion actually happens that promise of “unwavering support” would be put to the ultimate test.  We are now closer to a shooting war with Russia than we have been at any point since the end of the Cold War, but most Americans are totally clueless about the drama that is unfolding on the other side of the globe right now.

If a way to defuse this conflict is not found, we could literally be looking at a scenario that eventually leads us into World War 3.

And the clock is ticking, because once Putin gives the order to invade there will be no going back.

On Saturday, the Ukrainians once again reported that forces on the other side of the conflict zone opened fire.  The following is an English translation of a report that was posted on the official website of the Ukrainian military…

Ignoring the agreements reached on July 22, 2020 within the framework of the Tripartite Contact Group, the Russian occupation forces continue to shell the positions of the Armed Forces of Ukraine.

Since the beginning of this day, on April 3, 6 violations of the ceasefire regime by the armed forces of the Russian Federation have been recorded.

In the area of ​​the Vostok operational and tactical group near the town of PISKY, the Russian occupiers opened fire with 120-caliber mortars, large-caliber machine guns, hand-held anti-tank grenade launchers and small arms prohibited by the Minsk agreements. Near AVDIYIVKA and VODYANOY in the Azov Sea, Russian occupation forces fired large-caliber machine guns, anti-tank and automatic machine-gun grenade launchers.

Technically, the ceasefire that was agreed to on July 22, 2020 is no longer in effect because it expired on April 1st.

But the Ukrainians continue to frame these incidents as “ceasefire violations”.

On Sunday morning, the Ukrainian military posted another update…

Russian occupation forces continue to shell Ukrainian defenders’ positions in order to further accuse them of violating the ceasefire.

During the past 24hrs, on April 3, 10 violations of the ceasefire by the armed forces of the Russian Federation were recorded.

In the area of ​​the operational and tactical group “East” near the settlement of SAND, the Russian occupiers opened fire with mortars of 120-caliber, large-caliber machine guns, hand-held anti-tank grenade launchers and small arms prohibited by the Minsk agreements, and from near the village. hand-held anti-tank grenade launchers. Near the settlements of AVDIYIVKA, SHYROKYNE and VODYANE in the Azov region, Russian occupation forces fired large-caliber machine guns and grenade launchers of various systems.

Subsequently, the firing seemed to stop, and that is probably because there is a high level of respect on both sides for the religious holiday that was taking place.

But it is quite likely that the fireworks will resume on Monday, and hopefully the corporate media in the United States will start to properly cover this exceedingly important story.

At this moment, there are three seemingly unsolvable issues which need to be addressed if this conflict is to be defused somehow.

First of all, when Ukrainian President Volodymyr Zelensky signed Decree No. 117/2021 on March 24th, the Russians essentially considered it to be a declaration of war against them.  That document makes it the official policy of the Ukrainian government to reconquer Crimea, and the Russians consider Crimea to be their sovereign territory.  I don’t anticipate that either side will ever back down, and the Biden administration has been pushing hard to make this a very important issue internationally.

Secondly, the Biden administration has been doing everything that it can think of to try to sabotage the completion of the Nord Stream 2 pipeline.  Selling gas to the Europeans is exceedingly important to the Russians from an economic standpoint, and the possibility that the Europeans could end that relationship is probably the number one thing holding Putin back from launching an invasion right now.  But if the Biden administration is successful in killing the Nordstream pipeline and in getting the Europeans to start rejecting Russian gas, then Putin may figure that there is nothing left to lose.

Thirdly, the Russians will never, ever accept Ukraine joining the NATO alliance.  Having NATO forces right on the Russian border is considered to be completely and utterly unacceptable by Russian military strategists, and the Russians are extremely alarmed that NATO forces could soon be deployed to Ukraine on a large scale…

The Kremlin said on Friday that any deployment of NATO troops to Ukraine would lead to further tensions near Russia’s borders and force Moscow to take extra measures to ensure its own security.

NATO voiced concern on Thursday over what it said was a big Russian military build-up near eastern Ukraine after Russia warned that a serious escalation in the conflict in Ukraine’s Donbass region could “destroy” Ukraine.

UKRAINE’s armed forces have said joint military drills with NATO troops would begin in a few months’ time in a move which is likely to infuriate Russia’s President Vladimir Putin and stoke already heightened tensions with Moscow, which has expressed its opposition to the idea.

The Trump administration didn’t provoke Russia, and so for four years there was relative stability in the region.

But now the Biden administration has decided to put enormous amounts of pressure on Russia on multiple fronts, but this could backfire dramatically if the Russians decide that military action in Ukraine becomes unavoidable.

In recent articles I have described Biden as a “hothead” and a “warmonger”, and at this point his cognitive decline is apparent to everyone.  He is easily persuaded, and the fact that his national security team is packed with extremely aggressive warmongers is not reassuring.

This is a story that is not going to end well, but the vast majority of Americans have very little interest in foreign policy at this point, and most of them do not regard Russia as any sort of a threat.

But once the Biden administration actually gets us into a war, all of a sudden a lot of people are going to wake up and get really upset.

Of course a potential conflict is not just looming with Russia.  We are also stumbling toward potential conflicts with China, North Korea and Iran, and Biden’s national security team does not seem to know how to handle any of those relationships.