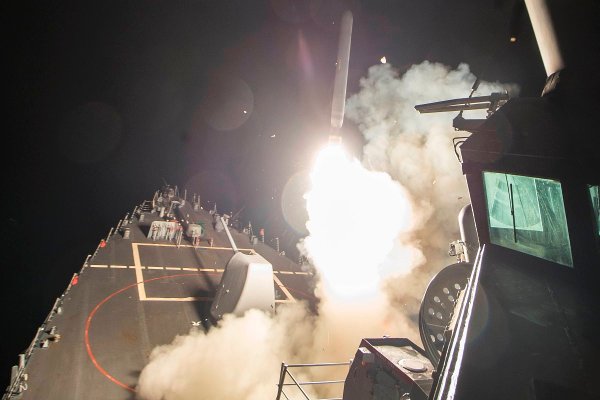 Did World War III begin on April 6th, 2017? After Donald Trump fired 59 Tomahawk cruise missiles into Syria on Thursday night, millions of Americans were cheering, but the cheering isn’t going to last for long if a new world war erupts. What is amazing to me is that this happened on the 100th anniversary of the United States entry into World War I. The U.S. officially entered that war on April 6th, 1917, and now 100 years later to the day Donald Trump has essentially declared war on Syria.

If you think using the term “World War III” is alarmist, you might want to tell that to the vast numbers of people that are buzzing about a new world war all over social media. If you don’t yet understand why a strike on Syria could be so dangerous, go back and read my article from yesterday. If we continue striking Syria, we could very easily find ourselves in a direct military conflict with Russia, Iran and Hezbollah.

Hopefully last night will be the full extent of U.S. military action. If Donald Trump and his national security advisers pat themselves on the back for “looking tough” and decide that was enough, we probably won’t see a major regional war break out.

But if the U.S. decides that regime change is necessary and continues to conduct more strikes, we will have war. And unfortunately, there are already signs that this may happen. On Friday, U.S. Ambassador to the United Nations Nikki Haley stated that the Trump administration “is prepared to do more”…

“The United States took a very measured step last night,” Haley said. “We are prepared to do more. But we hope that will not be necessary. It is time for all civilized nations to stop the horrors that are taking place in Syria and demand a political solution.”

I don’t understand why so many Americans seem to have a thirst for war.

I have been studying war virtually all my life. When I was just a small boy, I would check huge volumes on World War I, World War II and the Korean War out of the library and read them cover to cover. And let me tell you, war is hell. Nobody should actually want to see war, and now we are closer to the next world war than we have been in decades.

Needless to say, the Russians are extremely angry about what Trump has done. Russian President Vladimir Putin has denounced it as an “illegal act of aggression”, and Russian Prime Minister Dmitry Medvedev says that the U.S. came “within an inch” of a direct conflict with Russian forces…

Russian Prime Minister Dmitry Medvedev has said the US air strike on a Syrian air base came “within an inch” of militarily clashing with their forces.

He said the action taken by the Americans was in breach of international law and their own internal procedures, and accused Washington of “barely avoiding combat clashes with Russia”.

In a post on Facebook, Mr Medvedev said the air strike had “completely ruined relations” between the two superpowers.

What in the world is Trump thinking?

The Russians very much wanted Trump to win the election because they felt that there was a very high probability of war between our two nations if Hillary Clinton would have won.

And the Russians were quite right to think that.

So the Russian people rejoiced greatly when Trump won, because they thought that it would be a new day for relations between our two great countries.

But after last night that hope is dead.

In fact, historians will probably mark April 6, 2017 as the day when the relationship between the United States and Russia officially died.

And it didn’t take long for the Russians to start to respond. The following comes from Business Insider…

The Russia Foreign Ministry announced that it suspended an agreement to avoid clashes between Russian and US-led coalition jets over Syrian airspace, while Reuters reporter Idrees Ali reports that Russia withdrew from a deconfliction channel, which the US used Thursday night to warn Russian forces of the incoming cruise-missile strikes (which took place Friday morning local time).

In addition, it has been announced that Russia will be significantly bolstering air defenses in Syria, and according to Fox News a Russian warship has been dispatched to confront the two U.S. naval vessels that fired the cruise missiles at Syria…

A Russian warship entered the eastern Mediterranean Friday and was heading toward the area where two U.S. Navy destroyers launched missile strikes into Syria, Fox News has learned.

The Russian frigate, Admiral Grigorovich RFS-494, crossed through the Bosphorus Strait “a few hours ago” from the Black Sea, according to a U.S. defense official.

Here in the United States, we need to start making our voices heard very loudly so that President Trump will understand that most Americans do not want to go to war in Syria.

And of course the same thing can be said about a potential war with North Korea. After last night’s cruise missile display, North Korean leader Kim Jong Un is warning that his nation is on the “brink of war” with the United States.

One of the angles that is not getting a lot of discussion in the mainstream media is how the events of last night were viewed by the Chinese.

Donald Trump grew up in New York City at a time when the mafia still had a dominant presence, and to put a “hit” on another rival across town when you are sitting down for a meeting with a top boss from another family sends a very, very powerful message.

The fact that Trump ordered those 59 cruise missiles to rain down on Syria at the exact moment when he was having dinner with the president of China is going to be remembered by the Chinese for a very, very long time. In Asian cultures respect is a very big thing, and the Chinese had to be deeply embarrassed by what just happened last night.

On top of everything else, the truth is that Donald Trump blatantly violated the U.S. Constitution by conducting a military strike against Syria without the approval of Congress. This is something that U.S. Senator Rand Paul pointed out very clearly in an editorial that was released on Friday…

The Constitution clearly states that it is Congress that has the power to declare war, not the president. Even the War Powers Resolution, shoved forward by hawks as justification, clearly states criteria under which the president may act – a declaration of war, a specific statutory authorization, or a national emergency created by an attack on the United States.

That’s it. Absent those criteria, the president has no authority to act without congressional authorization. Congress must stand up and assert its authority here and now.

Conservatives always protested whenever Barack Obama violated the U.S. Constitution in this manner, and so they should protest when Donald Trump acts in the same fashion.

A lot of people will read this article and they aren’t going to grasp the importance of what is going on because they do not understand where all of this is ultimately heading.

But there are some of you that have major alarm bells going off in your head because you have been listening to the warnings and you know what comes next.

We have entered a season of time that myself and other watchmen have been warning about for many years. I just can’t believe that it is starting to happen so quickly. Many had been hoping for a time of peace and prosperity during a time of “reprieve” under Donald Trump, but you can forget that now.

The events of April 6th, 2017 have changed everything, and most Americans are completely unprepared for what will soon follow.