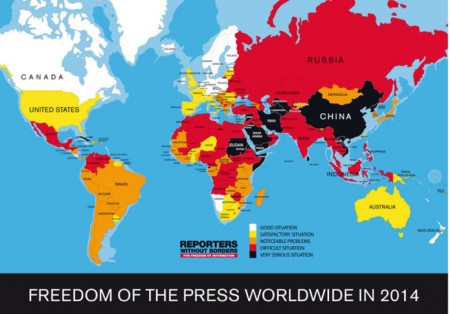 We used to have journalists who would cover important stories. There was no question about it-that was their job and we had freedom of speech. But somewhere during the last few decades that all changed.

Most journalists fail to even report important stories, like Benghazi and the IRS. Some even distort the truth by editing the speech to fit their narrative.

You can listen to Fox News and then tune in to CNN, ABC, NBC, CNBC or MSNBC, you name it, and you do not hear the same stories. The latter networks do not even report many stories. Of those they do report, the facts are distorted or omitted.

Two huge stories that come to mind are the Benghazi killings and the IRS targeting of conservatives.

Furthermore, have you noticed how entire networks, except for Fox News, are all actively promoting the President’s agenda and constantly praising him?

I used to watched Keith Oberman on MSBNC, just to see what was being reported (which was nothing). He used to end his show with “The Worst Person of the Day” which would denigrate and slime someone every day (always conservative). Classy stuff. I say “used to watch” because his show was dropped, and the entire network suffers poor ratings. But they continue reporting the same way. That is the definition of insanity, but more importantly, tells you that someone is pulling the strings to make them report the way they do, damn the ratings.

Cenk Uygur, former reporter for MSNBC, tells when he worked for that network, he progressively got higher and higher ratings, yet was told that “Washington is concerned about your tone,” and  “We are part of the Establishment, so act like an insider.” Because he didn’t, they denied him his promised 6:00 spot and put Al Sharpton in. Uygur decided to quit rather than go along with the censorship required of him.

What’s going on with the networks is pure propaganda, something you’d expect from a communist country.

Now “MSLSD” has got Al Sharpton hosting a show. I tried to watch that, but after a minute, could feel my blood start to boil. The fact that Al Sharpton is the President’s main go-to man now is outrageous. Sharpton is also  going to advise him on a new pick for Attorney General, so don’t feel too happy about Holder being gone. The new guy will probably be even worse. It’s truly pathetic.

In America, only six corporations own 95% percent of our media
What we have for mainstream media is better called
“Lamestream Media”

Dave Hodges of the Commonsense Show says, “Even as in the open our public corruption has become, most will never hear of it because six corporations own over 95% of the media. Most Americans think that they have a free press when nothing could be further from the truth.

One of the reasons listed for the decline are the many arrests of journalists covering Occupy Wall Street protests.

Amber Lyon, left the network because she was disgusted by the fact that:

The government paid hush money to CNN to not cover stories and also paid money to the compromised network to make up stories.

I can remember when in the 1990’s many were unhappy that the number of corporations which owned the lion’s share of the media had shrunk from 150 to 50 due to deregulation under President Bill Clinton.

Again, in today’s America, only six corporations own 95% percent of our media. One cannot, with any degree of confidence, believe a word coming out of the mouth of any newscaster or their network.

Can one imagine how far the freedom of the press ratings would have fallen if the murders of Andrew Breitbart and Michael Hastings were taken into account?”

President Barack Obama is no friend of press freedom, says a New York Times reporter who may be sent to jail for refusing to reveal a source.

“A lot of people still think this is some kind of game or signal or spin,” reporter James Risen told his own paper in a profile about his plight published Saturday. “They don’t want to believe that Obama wants to crack down on the press and whistle-blowers. But he does. He’s the greatest enemy to press freedom in a generation.”

An article in Freepress states, “According to a new report from Reporters Without Borders, there was a profound erosion of press freedom in the United States in 2013… the U.S. faced “one of the most significant declines” in the world last year. ”

Even the United Kingdom, whose sustained campaign to criminalize the Guardian’s reporters and intimidate journalists has made headlines around the world, dropped only three spots, to number 33. The U.S. fell as many spots as Paraguay, where “the pressure on journalists to censor themselves keeps on mounting.”

Citing the Justice Department’s aggressive prosecution of whistleblowers, including its secret seizure of Associated Press phone records, the authors write that “freedom of information is too often sacrificed to an overly broad and abusive interpretation of national security needs, marking a disturbing retreat from democratic practices. Investigative journalism often suffers as a result.”

The threats facing news gathering in the U.S. are felt by both longstanding journalists like New York Times national security reporter James Risen, who may serve jail time for refusing to reveal a source, and non-traditional digital journalists like Barrett Brown.

Brown is a freelance journalist who has reported extensively on private intelligence firms and government contractors. He now faces more than 100 years in jail for linking to stolen documents as part of his reporting, even though he had no involvement in the actual theft.

In 2012, after a series of high-profile journalist arrests at Occupy protests, the United States dropped 27 places in Reporters Without Borders’ World Press Freedom Index, landing in 47th place.

It’s worth noting, as many have on Twitter, that the ranking of the U.S. versus the U.K. raises some questions. The threats to journalists and the intimidation of sources in the U.S. are deeply troubling, as is the impact of mass surveillance on press freedom.

We should be concerned about press freedom in both the U.S. and the U.K. regardless of what the numbers say, and understand how intertwined anti-press freedom efforts are in both countries.”

Concerned and outraged, I say. This administration has eroded our freedoms on every front, and the erosion of press freedom is highly disturbing.

3 thoughts on “There Is No Free Press in the U.S.”