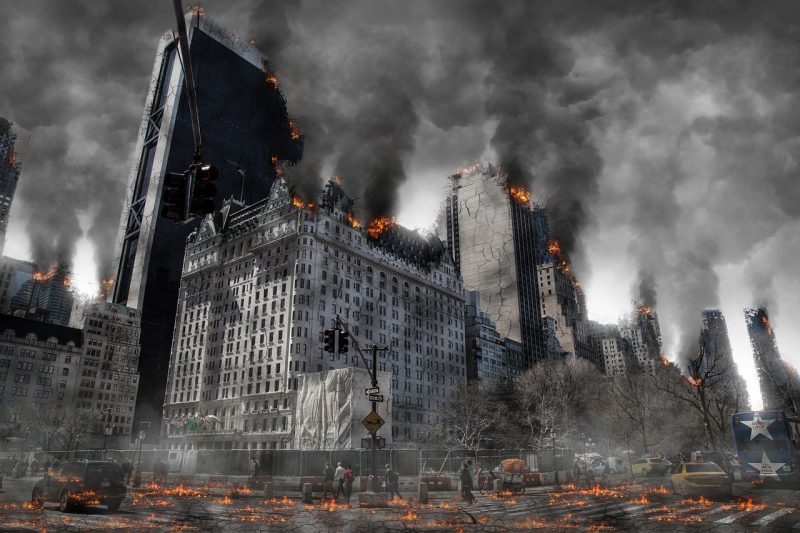 Where in the world did the anti-war movement go?  After the U.S. invaded Afghanistan and Iraq, an extremely vigorous anti-war movement relentlessly protested those wars, and that movement was often greatly aided by voices in the corporate media.  In particular, MSNBC was a persistent thorn in the side of the Bush administration, because day after day it would feature voices that were passionately against the wars.  But now everything has changed.  These days, MSNBC is beating the war drums more loudly than anyone else.  I realize that this doesn’t seem to make any sense, but it is true.

For instance, just consider what MSNBC host Ali Velshi has been saying.  On Sunday, he openly called for NATO to send troops into Ukraine in order to stop Vladimir Putin’s “crimes against humanity”…

Sunday, Ali Velshi, host of MSNBC’s “Velshi,” called on NATO to get involved in stopping Russian President Vladimir Putin from engaging in “crimes against humanity” in Ukraine.

Velshi declared it was time to do more than sanction and issue “strongly-worded condemnations” against Russia. He wondered, “what is the point” of alliances like the United Nations and NATO “if not to stop this.”

And in case there was any confusion about where he stood, on his Twitter account Velshi specifically stated that he is in favor of “direct military involvement” in Ukraine.

Needless to say, if NATO forces rolled into Ukraine that would immediately take us into the worst parts of World War III.

And if the conflict goes nuclear, billions of people could die.

But this is apparently what Velshi wants.

Of course we are witnessing a great deal of pro-war hysteria on other networks as well.  For example, Sean Hannity has suggested that we must be ready to take military action against Russia even if it means “mutually assured destruction”…

Fox News host Sean Hannity says the US must be willing to nuke Russia “off the face of the earth” if they use WMDs in Ukraine and mustn’t “cower in fear” over the prospect of a global nuclear holocaust triggered by “mutually assured destruction.”

Has Sean Hannity completely lost it?

I think that it would do him some good to sit down and watch Tucker Carlson for a few hours.

Carlson understands that nuclear war would mean the end of civilization as we know it today, and so he desperately wants to avoid that type of scenario.

But apparently Hannity is in favor of letting the missiles fly and seeing what happens.

Warmonger Hillary Clinton continues to spew venom about Russia as well.  In fact, she insists that now is the time “to double down on the pressure”…

“So I think now is the time to double down on the pressure. Let’s not fantasize about what comes next in Russia. Let’s focus on what we’re doing right now to help protect and defend the Ukrainian people’s right to be a free, democratic nation and protect their sovereignty,” Clinton concluded.

If she was in the White House, I have a feeling that a shooting war with Russia would have already started.

Thankfully, most ordinary Americans do not actually want to have a war with Russia…

But it definitely is alarming that more than a third of the country is on the side of the warmongers.

And as the corporate media continues to bang the war drums, that number is likely to go even higher.

Unfortunately, the truth is that we are completely and utterly unprepared for a war with a nuclear power.  According to a study that was just released, our missile defense systems could not even defend against “a small number of North Korean missiles”…

A new study of US missile defenses has found that — after 70 years and some $350 billion in investment — no “system thus far developed has been shown to be effective against realistic ICBM threats” to the homeland. It’s a conclusion with which the Pentagon’s Missile Defense Agency begs to differ.

The study by the American Physical Society (APS) examined a hypothetical North Korean strike and current missile defense systems, such as ground-based interceptors, as well as more futuristic options in development, like directed energy weapons and space-based interceptors. It found today’s capabilities inadequate and future systems unlikely to do the job of defending the country in the next 15 years at least — even from a small number of North Korean missiles.

In an article that I posted yesterday, I discussed the fact that North Korea now has missiles that can hit anywhere in the continental United States.

If Kim Jong-Un decided to lob a few of them at us at some point in the future, we would not be able to stop them.

That should greatly concern all of us.

And of even greater concern is the fact that the Russians have developed the most highly advanced intercontinental ballistic missiles on the entire planet.  For much more on this, please see my previous article entitled “Most Americans Don’t Know About The New Nuclear Weapons Russia Has Developed Since The End Of The Cold War”.

The RS-28 Sarmat is vastly superior to anything that the U.S. possesses, and we would be utterly defenseless if the Russians launched a barrage at us.

On the other side, the Russians have now introduced the cutting edge S-500 anti-missile system into service, and it has been specifically designed to intercept intercontinental ballistic missiles…

It can also target hypersonic cruise missiles and can intercept ballistic missiles within a range of 600kms.

We desperately need our own version of the S-500, and this is something that our leaders in Washington should be working tirelessly to achieve.

But instead, our leaders seem to have other priorities.

For example, a bill that was just passed by the U.S. House of Representatives makes it a crime to print an “indecent or immoral picture” on any package of cannabis…

The marijuana-legalization bill that passed the House of Representatives on Friday includes a section that makes it illegal to print an “indecent or immoral picture” on a package of cannabis that is offered for sale.

The Russians have been preparing to fight World War III for a very long time.

Meanwhile, the U.S. military has gotten really good at marching in pride parades and holding symposiums on diversity and gender issues.

And even though we couldn’t defeat the Taliban despite being in Afghanistan for two decades, the warmongers in the corporate media believe that we should just send the U.S. military into Ukraine.

To be honest, most of the “pundits” on television have no idea what they are talking about.

And if we get into a nuclear war with Russia, the vast majority of the people that are living in the United States today will end up dead.