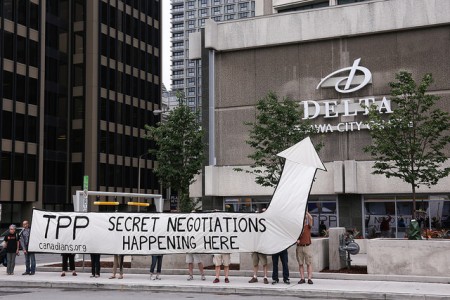 EFF is in Ottawa this week for the Trans-Pacific Partnership (TPP) negotiations, to influence the course of discussions over regressive digital policy provisions in this trade agreement that could lead to an increasingly restrictive Internet. But this round is different from the others—the secrecy around the talks is wholly unprecedented. The Canadian trade ministry, who is hosting this round of talks, has likely heightened the confidentiality due to the mass public opposition that is growing against this undemocratic, corporate-driven trade deal.

The trade offices from the 12 countries negotiating this deal no longer pre-announce details about the time and location of these negotiations. They don’t bother releasing official statements about the negotiations because they no longer call these “negotiation rounds” but “officials’ meetings.” But the seeming informality of these talks is misleading—negotiators are going to these so-called meetings to secretly pull together a deal. As far as we know, they’re still discussing whether they could expand the international norm of copyright terms to make it even longer. They are negotiating provisions that could lead to users getting censored and filtered over copyright, with no judicial oversight or consideration for fair use. And trade delegates are deliberating how much of a crime they should make it if users break the DRM on their devices and content, even if users don’t know it’s illegal and the content they’re unlocking isn’t even restricted by copyright in the first place.