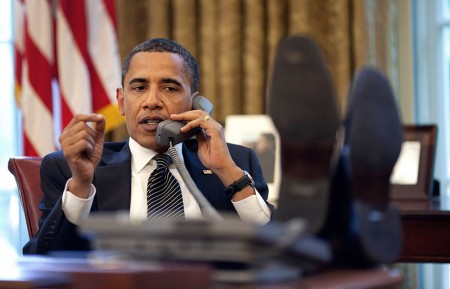 Yesterday, Barack Obama stated, “Turkey needs to be involved in coalition against ISIS.”

On Thursday Turkey said it will not allow the US to use its airbases to fight ISIS.
The Daily Star reported:

Turkey will refuse to allow a US-led coalition to attack jihadists in neighbouring Iraq and Syria from its air bases, nor will it take part in combat operations against militants, a government official told AFP Thursday.

” Turkey will not be involved in any armed operation but will entirely concentrate on humanitarian operations,” the official said on condition of anonymity.

The decision echoes the country’s refusal to allow the US to station 60,000 troops in Turkey in 2003 to invade Iraq from the north, which triggered a crisis between the two allies.

Ankara then also refused Washington permission to use its air bases to attack Saddam Hussein’s regime.

Turkey has come under fire by some critics for indirectly encouraging the formation of ISIS because of its support of Islamist opponents of Syrian President Bashar Assad, and its loose control of its borders.

Considering ISIS terrorists are operating across the Turkish border, this is a bold statement to Obama and the US.