Skip to content
FacebookTwitter
Gil Fulbright is a fake political candidate, appearing in a brutally honest (and hilarious) viral video. Watch it in the video above. Actor Frank Ridley plays the character of a money-hungry politician, who lets the public know in his ad that the issues don’t matter, as long as he can get re-elected.

The “campaign” is raising real money, even though Gil Fulbright’s name won’t appear on any ballot. Represent.Us, a non-profit organization, is sending this character to campaign events in Kentucky to bring a message to the public: Limit the influence of money in politics.

The organization has predicted the Kentucky Senate race between Senate Minority Leader Mitch McConnell and challenger Alison Lundergan Grimes will be the most expensive in the country, projected to cost $100 million. 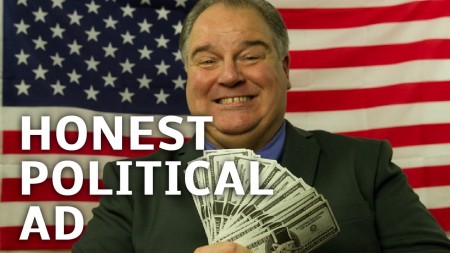