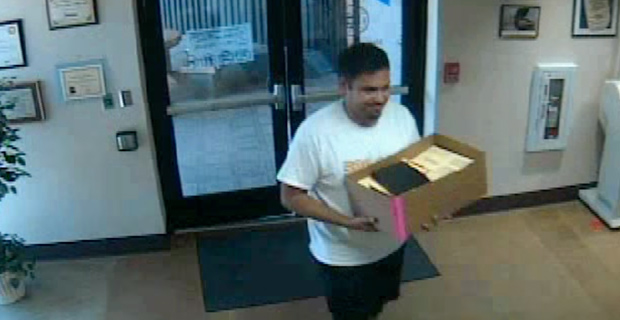 Defenders of lax election laws say it rarely happens — but apparently it’s happening again. In what critics describe as a shocking example of likely vote fraud, a surveillance video (see below) from a Maricopa County, Arizona, polling place shows a man stuffing hundreds of ballots into a ballot box.

The act was observed by A.J. LaFaro, chairman of the Maricopa County Republican Committee, on August 25 while he was stationed at the MCTEC facility at 510 S. Third Avenue in Phoenix during the primary election cycle. Writes the Arizona Daily Independent:

LaFaro recounts that between 12:54 p.m. and 1:04 p.m., he heard a loud thud and turned to see what was going on. “A person wearing a Citizens for a Better Arizona (CBA) t-shirt dropped a large box of hundreds of early ballots on the table and started stuffing the ballot box as I watched in amazement.”

While sound is not available on the recording

Person from CBA: “What’s your problem?”

Person from CBA: “Stop watching me. You’re annoying me.”

… LaFaro: “One of your ballots isn’t sealed.”

Person from CBA: “It’s none of your business. What’s your name?”

LaFaro: “I’m the chairman of the Maricopa County Republican Party. What’s yours?”