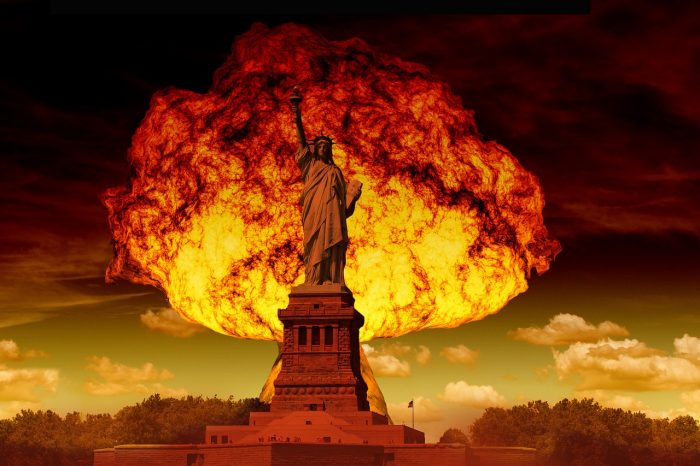 What a morbid question, eh?

Fortunately we have never seen anything like this happen, but it is only a matter of time before a nutjob gets a hold of a nuke and uses it to destroy a major city.

According to New York Magazine, this is what would happen immediately after a nuclear device went off in Time Square…

Consider one example: A ten-kiloton nuclear bomb detonated on the ground in Times Square would explode with a white flash brighter than the sun. It would be seen for hundreds of miles, briefly blinding people as far away as Queens and Newark. In the same moment, a wave of searing heat would radiate outward from the explosion, followed by a massive fireball, the core of which would reach tens of millions of degrees, as hot as the center of the sun.

When such a bomb explodes, everyone within 100 feet of ground zero is instantaneously reduced to a spray of atoms. There are photos from Hiroshima and Nagasaki showing eerie silhouettes of people cast against a flat surface, such as a wall or floor. These are not, as is sometimes claimed, the remains of vaporized individuals, but rather a kind of morbid nuclear photograph. The heat of the nuclear explosion bleaches or darkens the background surface, except for the spot blocked by the person, leaving a corresponding outline. In some cases the heat released by the explosion will also burn the patterns of clothing onto people’s skin.

I don’t think that any of us can even imagine devastation such as this.

And as bad as the initial fireball would be, more would probably end up being killed by the massive shockwave that would be unleashed…

As the fireball travels outward from the blast, people, buildings, and trees within a one-mile radius would be severely burned or charred. Metal, fabric, plastic, and clay would ignite, melt, or blister. The intense heat would set gas lines, fuel tanks, and power lines on fire, and an electromagnetic pulse created by the explosion would knock out most computers, cell phones, and communication towers within several miles.

Traveling much farther than the fireball, a colossal pressure wave would hurtle forth faster than the speed of sound, generating winds up to 500 miles per hour. The shock wave would demolish the flimsiest buildings and strip the walls and roofs off stronger structures, leaving only their naked and warped scaffolding. It would snap utility poles like toothpicks and rip through trees, fling people through the air, and turn brick, glass, wood, and metal into deadly projectiles. A blast in Times Square, combined with the fireball, would carve a crater 50 feet deep at the center of the explosion. The shock wave would reach a diameter of nearly 3.2 miles, shattering windows as far as Gramercy Park and the American Museum of Natural History.

And of course radiation would ultimately kill far more people than were killed by the initial explosion.

Today, we have literally created weapons that have the potential to completely wipe out humanity.

Do we also have the wisdom to keep these weapons from ever being used?