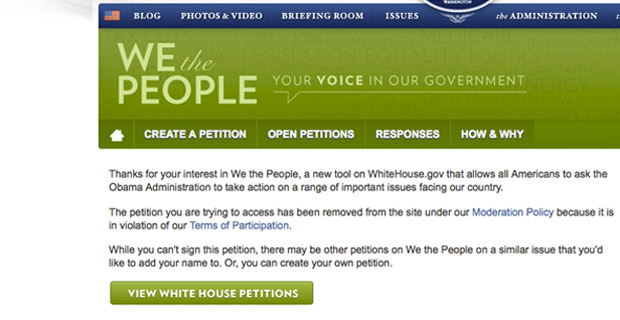 The White House recently deleted a petition demanding President Obama do more to stop the spread of Ebola in the U.S.

The Obama administration said the petition, which urged the White House to take proper action to fight Ebola, was removed from Whitehouse.gov because it “violated” the “Terms of Participation.”

“The petition you are trying to access has been removed from the site under our Moderation Policy because it is in violation of our Terms of Participation,” the White House stated. “While you can’t sign this petition, there may be other petitions on We the People on a similar issue that you’d like to add your name to.”

Of course, no where in the First Amendment does it state citizens can only petition the government for a redress of grievances if they accept terms and conditions written by the White House.

So, by removing the petition, it appears the Obama administration is more interested in controlling the narrative surrounding the Ebola pandemic than actually stopping the disease.