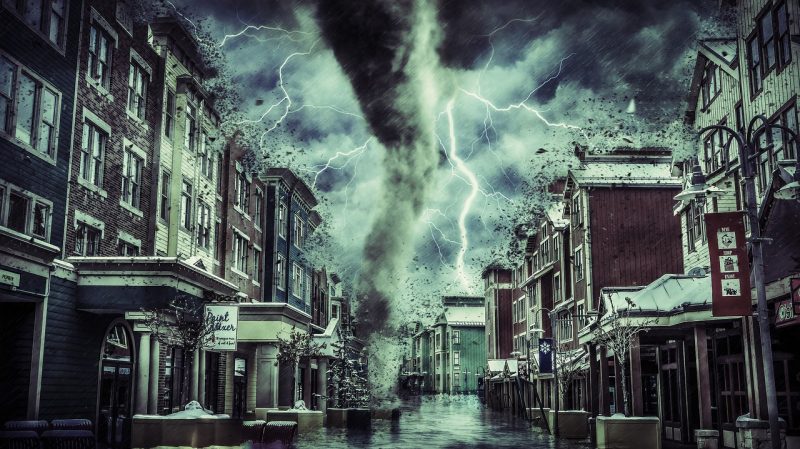 Have you become numb to all the bad news yet?  Almost every single day, something really horrible seems to happen in the United States.  It is just one thing after another and it has been that way for months.  It is as if we are in the midst of some sort of a “perfect storm” that never seems to end.  In all my years of writing, I have never seen anything like this.  There is so much bad news happening right now that it is literally impossible to keep up with it all.  Events are starting to accelerate at a pace that is absolutely breathtaking, and I am extremely concerned about what the remainder of 2022 will look like.

For months, I have been writing extensively about the endless drought in the western half of the nation.  We are being told that it is the worst multi-year megadrought that the region has experienced in 1,200 years, and it just keeps getting worse and worse.

Meanwhile, we are witnessing absolutely unprecedented flooding in the eastern half of the United States.  For example, some parts of Kentucky were just pummeled by more than 10 inches of rain in a 24 hour period…

Heavy rain poured down across eastern Kentucky late Wednesday into Thursday, triggering flash flooding that caused mudslides, washed away homes and roadways and promoted a flash flood emergency. The deluge produced more than 10 inches over a 24-hour period in the hardest-hit areas and came only days after another disastrous flood inundated the St. Louis area.

In some areas, it literally looks like a tsunami has just come through.  One local meteorologist admitted that he does not “have the words” to describe the incredible devastation that has taken place…

Chris Bailey, WKYT’s chief meteorologist said: ‘I don’t have the words to describe the amount of devastation daylight will uncover across eastern Kentucky.

‘This is likely to go down as one of the worst flash flood events to ever hit the state.’

Governor Andy Beshear is telling us that this was “one of the worst and most devastating events in Kentucky’s history”, and he isn’t sure why such bad things keep happening to his state…

Beshear described this as “one of the worst and most devastating events in Kentucky’s history” during the press conference. Beshear said the state was in the middle of an ongoing natural disaster and warned of the possibility for more rain to fall through Thursday night. Damage assessment and restoration were likely to continue for several days, but the dangerous flooding was hindering first responders’ ability to rescue residents, as well as allow utility workers to get power restored.

Of course this disaster in Kentucky came just one day after one of the worst flooding events in the history of the state of Missouri.

We are being told that we just witnessed “the wettest day ever for St. Louis”, and in some areas of the city the water actually got more than 8 feet deep…

One person died when a car in St. Louis was found covered in more than 8 feet (2.4 meters) of water. Several puppies drowned when a building became flooded at Stray Paws Adoptables, a stray dog rescue operation in St. Peters, a St. Louis suburb. Firefighters in boats rescued other dogs from the building.

Damage across the region was widespread after a massive downpour dropped more than 12 inches (30 centimeters) of rain in parts of St. Charles County and up to 10 inches (25 centimeters) elsewhere in the St. Louis metropolitan area. Most of the rain fell in a few hours shortly after midnight.

I really wish that we could take all of that water and give it to ranchers and farmers in the western half of the country, because the endless drought is absolutely crushing them.

Meanwhile, the U.S. is now dealing with two major simultaneous pandemics for the first time in my entire life.

Despite everything that health officials have tried, the first pandemic is still raging, and now another frightening disease is spreading like wildfire.

This current monkeypox outbreak began in Europe, but this week the U.S. officially became the world leader in confirmed cases…

With more than 18,000 cases worldwide, the monkeypox outbreak is now a global public health emergency, the World Health Organization declared this week. And the U.S. has recorded more monkeypox cases since the beginning of the year than any other country, according to the most recent statistics.

The number of confirmed cases continues to rise at an exponential rate, and this is one disease that you definitely do not want to get.

Many victims have described experiencing absolutely excruciating pain once skin sores start developing, and one man that has had both COVID and monkeypox is telling us that monkeypox is “100 times worse”.

On top of everything that I have already discussed, we just got confirmation that the U.S. economy has plunged into a recession…

The U.S. economy contracted for the second straight quarter from April to June, hitting a widely accepted rule of thumb for a recession, the Bureau of Economic Analysis reported Thursday.

Gross domestic product fell 0.9% at an annualized pace for the period, according to the advance estimate. That follows a 1.6% decline in the first quarter and was worse than the Dow Jones estimate for a gain of 0.3%.

Of course Joe Biden will never admit that a recession has now started.

According to him, everything is just great…

Biden noted that ‘both Chairman Powell and many of the significant banking personnel and economists say we’re not in a recession.’

‘Businesses are investing in American in record rates,’ Biden boasted.

But everyone can see what is happening to the economy, and we are being warned that we must endure some “short-term pain” in order to get inflation under control…

“We have to endure the short-term pain in the economy in order to get inflation back under control,” said Tara Sinclair, a senior fellow at the Indeed Hiring Lab. She compared the Fed hiking interest rates and tightening monetary policy to a medical treatment that might require patients to undergo something painful in order to have longer-term health. “Then, going forward, we can have a much more stable environment where we know prices are going to be growing about 2 percent per year, we have more certainty about that, we have a better sense of demand and supply coming together. That’s a better working environment for the economy as a whole, and businesses want that kind of certainty.”

Without a doubt, we desperately need to do something about inflation because it is absolutely eviscerating those at the bottom of the economic food chain.

For example, just consider the plight of one woman that was recently interviewed by CNN…

For 17 years, Ana Duran worked full time as a travel counselor. Late last year she lost that job, shortly before seeing the price of eggs rise to $7.99 a dozen and the price of a single avocado rise to $2.99 at her local store. In June, it cost her $94 to fill up her gas tank, instead of the $50 it cost her last year.

Duran has been receiving unemployment benefits and working part-time as a caregiver for a resident at a senior center. To make ends meet, she’s also been selling her own gold jewelry and crushing aluminum cans to recycle for extra cash.

Unfortunately, what the Fed is trying to do isn’t going to work.  The inflation rate will likely stabilize, but we aren’t going back to a low inflation environment.

Ultimately, we are going to get to enjoy 1970s-style inflation and a repeat of the housing crash of 2008 all at the same time.

Won’t that be fun?

A historic economic meltdown of epic proportions has begun, and it is going to get a whole lot worse.

We seem to be in the midst of some sort of a “perfect storm” with no end in sight.

So why is this happening to us?

Why does the United States just keep getting hit by one historic nightmare after another?

We appear to have entered an ominous new chapter in our history, and I believe that events will accelerate even more during the difficult months that are ahead of us.