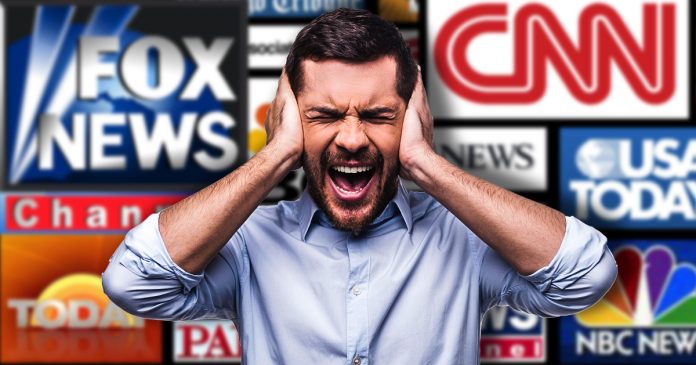 (By Caleb Stephen) The mainstream media as we know it is dead. They’ve been discredited big time and nobody trusts them anymore. People have woken up to the fact that the corporate media is nothing more than a dissemination tool for socialism and globalism. As an alternative media journalist and commentator, I’ve been closely watching and analysing the fall-out following the U.S. election over the last month.

A survey conducted earlier this year showed that just 6% of Americans trust the mainstream media. Is it any wonder why?

It’s true that their demise has been many years in the making, but the defeat that we witnessed following the election was absolutely epic in proportion.

The recent U.S. elections were, I guess, the climax in the crescendo of the loss of their integrity. Americans’ distrust of the mainstream media didn’t happen overnight. This dissatisfaction and loathing of the lies and propaganda fed to them on a daily basis happened slowly over time as more and more people began to wake up to reality and refused to buy into their malarkey.

During the election, the absolute fawning, gushing, genuflecting and infatuation over Hillary Clinton stank like a rotten corpse. It was palpable… it was blatant what they’re were trying to do in terms of painting Donald Trump as pure evil whilst trying to extol Hideous Hillary as if she was a saint.

People saw this. Even some Democrats – liberals – did. They couldn’t stand a joke of a presidential candidate falling over, fainting and coughing uncontrollably. Obviously, for them it wasn’t in so much a disappointment over her political and ethical stances but more to do with their disgust for such a sickly candidate standing for president.

The U.S. election essentially saw two birds killed with one stone – quite literally in fact. First Trump’s landslide victory absolutely left Hillary and her obeisance-paying liberal, social justice warrior heartbroken and crushed. And if that wasn’t enough, the mainstream media got just the same, which has ultimately, lead to their timely death.

All the lying on the corporate media shills’ part eventually wore thin. Their thick web of lies, propaganda and deceit unravelled on the night Trump won the election. They had predicted the billionaire real estate tycoon had a 1% chance of winning the White House. They perpetuated this lie over and over again meanwhile propping up Hillary in an effort to compensate for the fact that just about nobody turned up to her rallies.

So, yes the mainstream media establishment is dead. They’re not dead in the sense that they no longer exist. All the major corporations still have newsrooms and crews intact, but what is not intact is the integrity and spirit that they once had. They are dead simply because just about nobody trusts them anymore and that’s thanks to their decades of perpetuating fake news and attempting to insult the intelligences of their viewers and readers.

The mainstream media colluded with the Democrats in a concerted and well-directed effort to elect Hillary by providing both cover and ammunition for the Democratic Party, while hiding behind the misappropriated title of “journalists.”

But you simply can’t call yourself “the press” when you give the questions of a presidential debate to one candidate.  You can’t pretend impartiality any longer when you are coordinating with the Democratic National Committee on the questions you need to ask of their opponents. You cannot pretend to be non-partisan or “neutral” when during a presidential debate instead of acting as referee you actually engage in the debate itself.

The fact that they’re dead is evidenced by the fact that major outlets such as the Washington Post and NY Times as well as cable TV and all the rest of them have, in recent weeks, been promoting their fake news hoax in an effort to discredit alternative, independent news sites. Why? Because their ratings, readership and revenue has absolutely plummeted and everyone has migrated to non-mainstream sources. Yes they know it and that’s why they’re that desperate.

One such example was seen just last week where the Washington Post thought it smart to publish a real fake news story attacking a shady list of ‘fake news’ sites (a.k.a. real, independent news websites) and ended up getting roasted on the hot seat after they were threatened with a lawsuit by one of the sites on the said list. Bad move, alright! Alternative media has gotten to that point where we can face up to the mainstream bullies flexing some muscle and say “don’t mess with us!”

Reflecting on the downfall of the MSM establishment, we’d expect them to be crushed temporarily and then perhaps rally the strength to recoup as in the past. But no, that hasn’t happened. They were shot down in flames and just over a month later, they’re still down and will remain down. Their trail of lies and deceit has caught up with them and has ultimately led to their demise.

The media as we know it is dead and it’ll take an absolute miracle to resurrect them. Honest, truthful, old-fashioned journalism is the future for media. This challenge is left to alternative, independent media outlets that are rapidly filling the vacuum left by the evacuated mainstream media. We’re already seeing this happening, with hordes of disenchanted individuals turning to alternative news websites such as InfoWars, Breitbart, Drudge Report, The Daily Caller, WeAreChange.org and many others.

This mass exodus is only set to get better and grow bigger. I say: “let the future begin”.