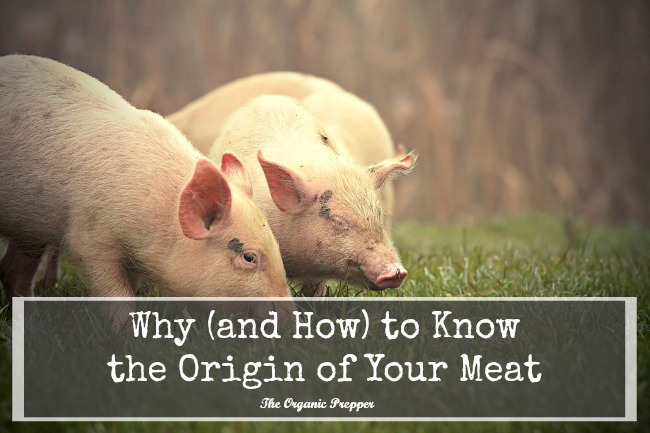 As often occurs, members of Congress snuck some crusty little barnacles onto the budget bill that would have been hard to pass on their own. One of those was repealing the law that required labels letting you know the origin of your meat sold in US grocery stores.

The World Trade Organization said those labels were unfair to foreign meat producers. The only reason this would be “unfair” is that American consumers were opting for meat produced within our country. Clearly, the members of Congress (you know, the ones elected to represent your interests) don’t give a flying Houdini about the wishes of consumers, and they’ve made that clear by repealing the law passed to give us the option of purchasing American-raised meat.

Now, I certainly can’t endorse CAFO-raised meat, but the fact is, even in those horrifying conditions, the standards in America are better than the standards, in say, China, which has some extremely questionable practices. Disgusting “food safety” practices are just one of the reasons why you should know the origin of your meat.

Here are some examples of why you might not want to eat meat from China.

The footage captured workers handling food with their bare hands. Several scenes showed them picking up meat that had fallen on the floor and returning it directly into the processing machine…

Husi had been supplying chicken and beef products to branches of McDonald’s, Papa John’s, Burger King, Starbucks, KFC, and Pizza Hut in several cities in China.

Of course, China isn’t the only other country from which food will be imported without a label. It’s just one of the most questionable.

It’s not just about food safety

When we import our food from a country where the costs are far less, we are putting our own farmers out of business. Most people don’t consider the expense of farming here in America, where land and feed are far more expensive than provincial China.

This bill could single-handedly destroy the ranching industry in our country when our farmers can’t compete with the low prices of foreign-produced meat.

According to an article by Michael Snyder, China already sells more than 4 billion pounds of food to America every year. This number is sure to go up now that the label warning that the package of meat in your hand comes from China will be removed. If you’re wondering where all of the jobs are going, this is your first clue – they’re going to China.

So even if you are determined to help keep American farms in business, without labels letting you know the origin of your meat, it will be a lot more difficult to support our ranchers.

How to know for sure the origin of your meat

Avoiding meat from questionable locales is possible, even without the labels warning you of the origins.

1.) Get friendly with the butcher.  Whether you shop at the grocery store or a butcher shop, getting to know the person who runs it is the best way to get accurate information about the food sold there. Many times, they will be able to provide information to you, particularly about the meat that they process there at the shop. They can point you in the direction of the food grown closer to home.

2.) Look for labels that boast of American farms. While no one is required to put country of origin labels on their food, some companies proudly label their food as a product of the USA. Look for companies that are happy for you to know that your food was grown and processed here on American soil.

3.) Cut your costs by buying in bulk directly from a farmer.

If you purchase your meat from local farmers, you can find out all sorts of stuff about the origin of your food. For example, I know the origin of my pork, right down to the breed of pig and the apple mash it was fed to fatten it up. I know that the pigs weren’t fed GMO, soy-laden feed, nor were they ill-treated. As a matter of fact, I saw them before they went to the butcher, so close was my relationship with the farmer who raised them.

Find another like-minded family to split purchases with if you don’t have the space to store an entire pig. My friend and I split 2 American guinea hogs per year. (They’re smaller pigs.) I also get my lamb and beef in bulk quantities too.  When purchased all at once, I’ve found that the price is actually lower than the stuff you get at the grocery store. My last pig purchase was less than $4 per pound for fresh, local, organic pork.

4.) Purchase locally from the farmer’s market.

I know this meat is more expensive that the stuff you get at the grocery store, but it’s far healthier. You can also cut your costs by purchasing in bulk once you develop a friendship with the farmer. (See above.)

I realize that kind of relationship isn’t possible for everyone, but if you do some looking around, you can find people who raise meat at your local farmer’s market. (You can find a farmer’s market close to you on this website.) Some butcher shops also specialize in locally raised meat – when we lived in the city we found just such a shop.

If you want to really, truly know where your food comes from, you can’t beat raising it yourself.

While it isn’t an option for everyone to raise a beef cow in their backyard, smaller meat animals are a lot easier. Consider raising rabbits, which are fast becoming the meat of choice for homesteaders. Rabbits are popular in part because they multiply, well, like rabbits. Rabbit meat is lean, the cost for raising them is minimal, and space requirements are not great.

Aquaponics are a solution that can provide you with fresh fish and fresh produce. Using an aquaponics set up, you can see the symbiotic relationship between the two as the fish feed off the castoffs of the roots of the plants, and fertilize the plant with their waste. It’s easier than you might expect to get this system going.

If you have more space, a hog or meat chickens can be raised cost-effectively. I have a dozen ducks that need about one more month to be ready for the kitchen. If you are squeamish about butchering (like me) you can often trade part of the meat with someone who is more adept at processing the animal than you are. (Be sure to adhere to stringent food safety practices when processing your own meat.)

What are your thoughts on the repeal of this law?

Are you bothered by the fact that the country of origin labels are no longer required? Will you take extra steps to ensure that you get products raised and processed in America? Do you have any tips that I left out for those who are concerned? Please share them in the comments below.