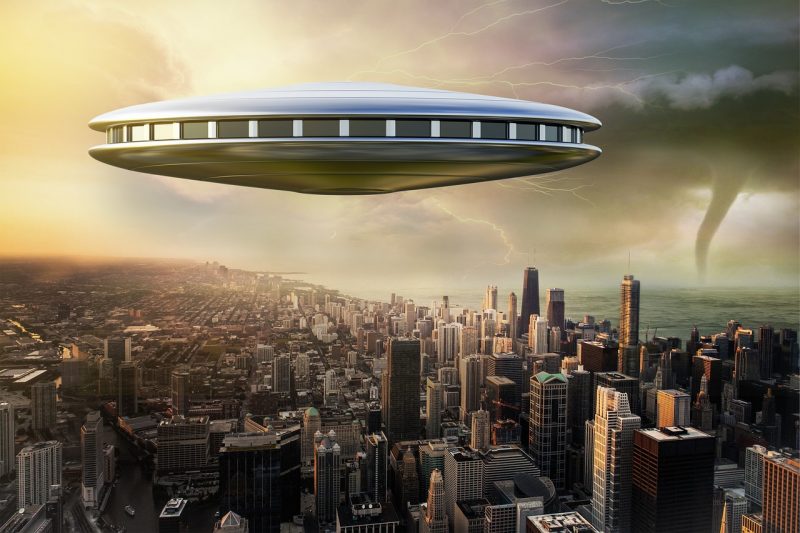 Have you noticed that UFO sightings have been in the news a lot lately?  Even in the midst of all the other big events that are happening, evidence of mysterious objects flying through our skies continues to make headlines.  In particular, what one American Airlines pilot says that he saw is really shaking a lot of people up.  According to a radio transmission that was intercepted from American Airlines Flight 2292, a pilot claims that he witnessed “a long cylindrical object that almost looked like a cruise missile type of thing” fly at very high speed right over the top of his aircraft…

The cockpit audio from American Airlines flight 2292 from New Mexico to Phoenix sounded like something out of a Sci-Fi movie.

“Do you have any targets up here? We just had something go right over the top of us,” a pilot can be heard saying.

“I hate to say this but it looked like a long cylindrical object that almost looked like a cruise missile type of thing moving really fast right over the top of us.”

This got so much attention that officials at American Airlines were forced to address it.  They put out a statement in which they confirmed that the radio transmission did actually come from American Airlines Flight 2292…

American Airlines put out a statement, saying, “Following a debrief with our Flight Crew and additional information received, we can confirm this radio transmission was from American Airlines Flight 2292 on Feb. 21.”

And the FBI has also publicly announced that it is “aware of the reported incident”, but the agency has not provided any additional details.

Of course this sort of thing is happening a lot these days.  In fact, the U.S. Sun has just put out an article documenting “a string of strange incidents involving passenger jets” in recent months.

In the old days, the U.S. government would go to great lengths to deny that anything unusual was happening in our skies.  But over the past couple of years, government officials have started to change their tune.

This footage had already been circulating on the internet. By releasing it, the Department of Defense confirmed the videos’ authenticity—and that it didn’t know what they showed.

Much more importantly, the Defense Intelligence Agency recently released documents that admit that the U.S. has been testing wreckage from UFO crashes…

THE Pentagon has admitted to holding and testing wreckage from UFO crashes in a bombshell Freedom of Information letter, shared with The Sun.

Researcher Anthony Bragalia wrote to the Defense Intelligence Agency (DIA) requesting details of all UFO material, which they hold and results of any tests they had been carrying out on it.

After all this time, why would the federal government finally admit this?

Are they trying to mentally prepare us for something?

According to the 154 pages of test results that were released, some of the materials that have been retrieved from UFOs possess “extraordinary capabilities”…

In the response, shared with The Sun, the DIA released 154 pages of test results that includes reports on a mysterious “memory” metal called Nitinol, which remembers its original shape when folded.

Bragalia said it was a “stunning admission” from the US government and the documents reveal that some of the retrieved debris possesses “extraordinary capabilities” including the potential to make things invisible or even slow down the speed of light.

Obviously the entities that are operating these craft are highly advanced, and they appear to have technology that we do not currently have.

But are they friend or foe?

Haim Eshed, who headed Israel’s space security programs for 30 years, has been in the spotlight in recent days, after claiming that aliens exist, that Israel and the US have long been in contact with them, and that Donald Trump was going to blab but the extraterrestrial beings of the “Galactic Federation” stopped him.

Eshed said aliens conduct experiments on Earth, and there is a joint base underground on Mars where they collaborate with American astronauts. “They asked that we don’t publicize they are here because humanity isn’t ready,” he said.

If Haim Eshed is to be believed, the “aliens” are already here and the U.S. is already cooperating with them.

That makes it sound like we don’t have anything to be concerned about.

But other experts have come to a completely different conclusion.

Temple University history professor David Jacobs has been studying the alien abduction phenomenon for decades, and he believes that these “aliens” have a deeply malevolent agenda…

According to Jacobs, his lifelong research into alien abduction has forced him to the conclusion that an alien race has been implementing a clandestine and sinister program to create an alien-human hybrid race.

There is so much speculation about these beings, and it can be very difficult to separate truth from fiction.

But as the number of sightings continues to rise, it is becoming clear that something very strange really is happening in our skies.

And after decades of very strict secrecy, the U.S. government is now openly admitting that UFOs exist.

Many people are looking forward to the day when we can openly welcome direct contact with our “space brothers”, but I do not believe that these are “friendly aliens from another planet”.

In fact, they are not our friends at all.

Unfortunately, our entertainment industry has spent decades preparing the general public to embrace visitors from “another world”, and I expect that is precisely what would happen.

We are moving into such a chaotic chapter in human history, and a time may come when intervention by “aliens” will be greatly welcomed by a human race that is deeply suffering.

The truth is out there, but as far as UFOs are concerned, most people are going to continue to believe whatever it is that they want to believe.

4 thoughts on “Are The Recent UFO Disclosures Setting Us Up For A Mass Deception Of Epic Proportions?”