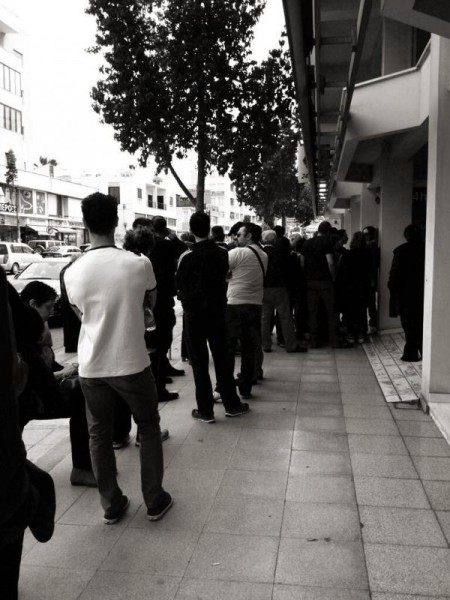 It’s bad enough that you don’t make any interest holding your money in a checking or savings account at the bank. But at least it’s safe, right?

Not so much, as Federal Reserve Vice Chairman Stanley Fischer announced this month that instead of banks receiving bail-out money (from taxpayers) when they experience financial problems, they have now planned for a bail-in (by depositors and investors).

It’s funny how the Powers that Be always use funny names
to mask what’s really going on.
Fischer used a new term for the bail-in method: “gone concern”.

A “Cyprus Haircut” is coming to a bank near you. Here is the exact quote from Fischers’s speech:

For example, in the United States, …Work on the use of the resolution mechanisms set out in the Dodd-Frank Act, …holds the promise of making it possible to resolve banks
in difficulty at no direct cost to the taxpayer.
As part of this approach, the United States is preparing a proposal to require systemically important banks to issue bail-inable long-term debt
that will enable insolvent banks to recapitalize themselves in resolution without calling on government funding–
this cushion is known as a “gone concern” buffer.

Will the bank issue you a long-term IOU?

“GONE CONCERN” is what they are calling this new bail-in scheme. One wonders, when new terms are hatched – were they trying to shorten up a sentence like, “Gee, all my money is GONE and I am really CONCERNed” into a phrase? They should have named it “GONE OUTRAGED”!

And what exactly is meant by “issue bail-inable long-term debt”? Instead of getting your money back, will the banks issue an IOU to pay you over the course of 20 years? Or just confiscate it, like they did in Cyprus?

Not that it’s a shock. Just a little over a year ago, another Fed governor, Governor Jeremy C. Stein, warned that investors would bear the losses; that the Fed would NOT be using their emergency authorities (printing presses) to bail out failing banks:

“if a SIFI (A systemically important financial institution) does fail I have little doubt that private investors will in fact bear the losses—even if this leads to an outcome that is messier and more costly to society than we would ideally like. Dodd-Frank is very clear in saying that the Federal Reserve and other regulators cannot use their emergency authorities to bail out an individual failing institution. ”

To summarize, the necessity of saving what is considered a “systemically important financial institution” is of such utmost importance, that it will be the top priority of our society, which may inconveniently suffer messy and very costly outcomes, to ensure the banks’ survival.

No longer will the Fed balloon it’s balance sheet, nor the taxpayer be on the hook for these banks. Better yet, the depositors and investors will suffer the losses.

Just last month, I wrote about how “Money Market Withdrawals Are Now Subject to  Withdrawal Restrictions”, indicating there would be a freeze on your money for an unknown period of time.

James Rickards, who holds a PhD in Economics, and is the author of “The Death of Money” spoke about this topic a month before Fed Chairman Fischer’s speech:

“You are going to see a liquidity crisis. People are going to say,
“I want my money back.”
The last 2 responses was to provide the money, and the governments gave it to us.
I think the next time will be different because of the scale of the problem,
and the fact that the 2009 problems were not fixed.
The Fed’s balance sheet is at 4 trillion and I don’t think they want it to be 8 trillion.”

“There’s another solution which is becoming apparent and that is, “You know what. You can’t have your money back.” Investors will want their money back and the traditional solution is to print the money to give it back, but the next time, they may say no.

We are 5 years into this experiment, where the Fed is making it up as they go along, and using the consumers as guinea pigs.  It is too late to “ease out of this” and I am not referring to monetary policy. The idea that you could get out of this bubble economy without a crash – it’s too late for that.

The bubble’s already here, we should expect the crash sooner than later. I’m not saying tomorrow, but probably in 2015 we will start to see some severe downdrafts and they will be directly attributable to the Fed’s ignorance of how markets actually work.

We saw a preview of this in Cyprus, with the “bail-ins” there. This is coming to a bank near you. The policy makers are coming around to the idea that the economy will collapse again. They realize they failed, that we do not have a real recovery in the self-sustaining sense. They realize it will be bigger than 2008. And so they are preparing for what they will do when the economy crashes.”

It’s evident that as time goes on, the Fed is getting creative, pulling more tricks out of their hat to benefit their own survival, along with their bankster friends.