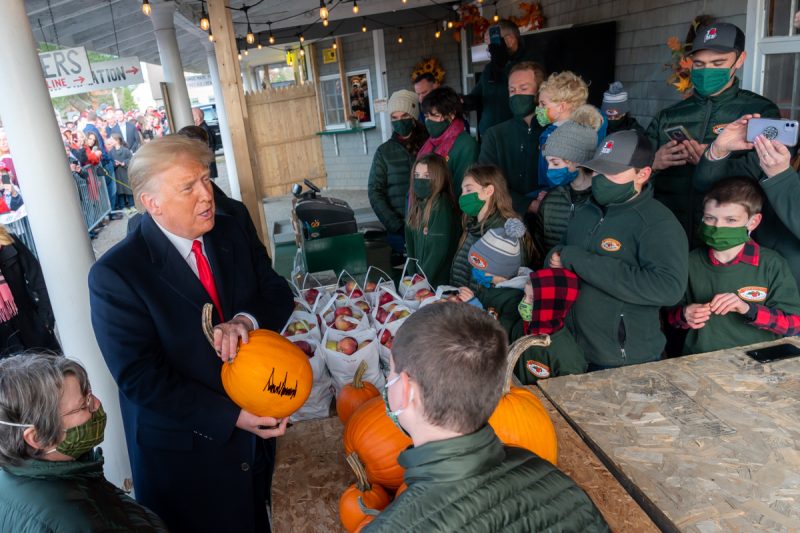 Do you think that you know who will win the election?  Well, forecasting who will win elections is what the folks over at Fivethirtyeight do for a living, and in 2016 they told us on Election Day that Hillary Clinton had a 67 percent chance of winning.  Needless to say, they were widely mocked when Trump was victorious, but that didn’t stop them.  Today, Fivethirtyeight is projecting that Joe Biden has an 87 percent chance of winning this election, and that is a number that has stayed fairly stable in recent weeks.  But of course their projections are primarily based on the same state polls that were deeply flawed in 2016, and so there is a very real possibility that they will be embarrassed once again in 2020.

The mainstream media likes to focus on the big national polls that show Joe Biden with a large lead, but the truth is that this election is going to be won or lost in just six absolutely critical swing states.  Whichever candidate can win at least four of those six swing states is almost certain to win the election, and in this article I am going to focus on polling numbers in only those six states.

In 2016, the final RealClearPolitics average of Florida polls had Trump up by just 0.2 points, but he ended up winning the state by 1.2 points.

So Trump overperformed the polls by 1 point.

Right now, Joe Biden is leading by 1.8 points in the latest RCP average of Florida polls, but if you subtract one point from his lead that would make this a very, very tight race.

In 2016, the final RealClearPolitics average of North Carolina polls had Trump up by 1.0 points, but he ended up winning the state by 3.7 points.

So Trump overperformed the polls by 2.7 points in that case.

Today, the latest RCP average of polls shows Biden up by 1.2 points, but a swing of 2.7 points would put Trump in the lead.

In 2016, the final RealClearPolitics average of Arizona polls had Trump up by 4.0 points, but he ended up winning the state by just 3.5 points.

So this is one of the rare cases where Trump actually underperformed the polls.

At this moment, the latest RCP average of polls has Biden up by 2.4 points, and that would seem to indicate that Trump may be in danger of losing those electoral votes.

Arizona is a special case because so many people from California are constantly migrating to the state, and that is fundamentally changing the demographics of the region.  Arizona has been drifting left for years, and that process has accelerated here in 2020.

In 2016, the final RealClearPolitics average of Wisconsin polls had Trump down by 6.5 points, but he ended up winning the state by 0.7 points.

So Trump overperformed the polls by a whopping 7.2 points in that case.

Right now, Joe Biden is leading by 5.5 points in the latest RCP average of Wisconsin polls, but a 7.2 percent shift would put this state in Trump’s column.

In 2016, the final RealClearPolitics average of Michigan polls had Trump losing by 3.4 points, but he ended up winning the state by 0.3 points.

So that was an instance where Trump outperformed the polls by 3.7 points.

Today, the latest RCP average of polls shows Biden up by 9.0 points in Michigan, and so even after taking 3.7 points away Biden would still seem to have a lead.

In 2016, the final RealClearPolitics average of Pennsylvania polls had Trump losing by 1.9 points, but he ended up winning the state by 0.7 points.

So in that absolutely pivotal state Trump overperformed the polls by 2.6 points.

The latest RCP average of polls has Biden up by 4.8 points in Pennsylvania, but taking 2.6 points from that difference would make it a very close race.

Of course it is always possible that either Trump or Biden could win states that they are not currently expected to win.  For example, it would not be a total shock if Biden won Iowa or Georgia, but those states are not likely to be in his column unless there is some sort of a landslide.

Likewise, Trump could pull a shocker in Minnesota or Nevada, but in either of those cases Biden would really have to underperform compared to the most recent polling numbers.

In the end, I believe that Florida and Pennsylvania are the two most critical states.  If one of the candidates is able to win both of those, it is going to be exceedingly difficult for the other guy to win.

For both campaigns, turning out people that the experts don’t expect to vote in high numbers will be so important.

In 2016, hordes of “shy Trump voters” showed up at the polls, and Trump is counting on that to happen again here in 2020.

For the Biden campaign, high turnout among young and minority voters is critical, but Democratic candidates have been disappointed by young voters many times before.

As I write this article, the numbers show that more than 64 million Americans have already voted, and it is being projected that we will see the highest level of voter participation in a presidential election since 1908.

So many Americans are fired up to vote in this election, and as I discussed yesterday, most of them believe that their candidate will end up winning.

Because so many people are voting by mail, it will take some time to get the final results, but once a winner is finally declared there will be tens of millions of Americans that will be emotionally devastated.

For many Democrats, another four years of Trump is about the worst thing that they could possibly imagine.  If Trump wins again, some have indicated that they will leave the country for good, but many more will use it as an opportunity to cause tremendous chaos in the streets.

For many Republicans, Trump is a hero figure that transcends politics.  Watching him lose would be like having their favorite teams lose the Super Bowl, the World Series, the World Cup and the NBA Finals simultaneously.  Trump is deeply, deeply loved by millions of conservatives, and a loss would be more than many of them would be able to handle.

The ironic thing is that most Americans don’t really care too much about Biden one way or the other.  In the end, this election is all about Donald Trump, and very soon we will know whether the number of Americans that love Trump is greater than the number that hate him.