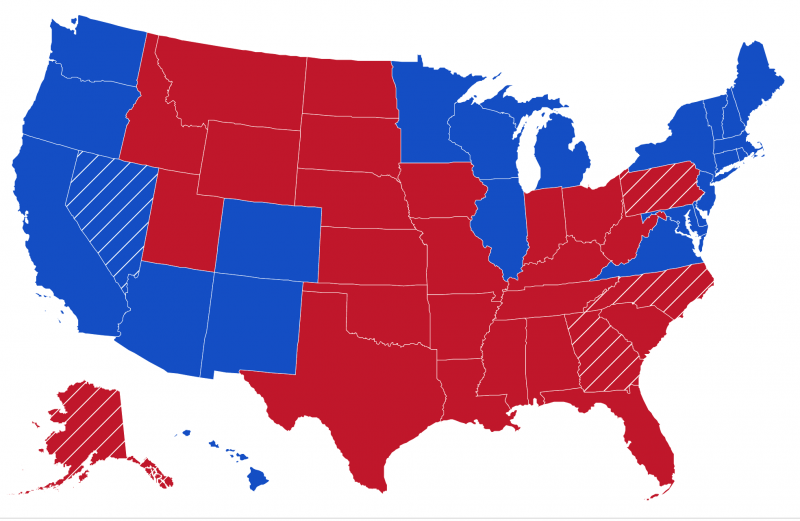 The big news networks seem to be pretending that they aren’t there, but the truth is that there are some very serious statistical “anomalies” that really need to be explained.  The integrity of our elections is of the utmost importance, and over the last 24 hours I have seen some things that concern me greatly.  I think that the mainstream media is assuming that they can just go ahead and declare victory for Joe Biden and that all of these “anomalies” will soon be forgotten, but I don’t think that Trump and his supporters will let this go.  The stakes in this election are so high, and it won’t be so easy to sweep things under the rug like we have seen in the aftermath of past elections.

Since I originally wrote this article, some of the “anomalies” have been explained, but some of the most serious ones have not.

In particular, it looks extremely suspicious that Trump had a large lead in both Michigan and Wisconsin up until the very end, but then huge vote dumps suddenly swung each state to Biden.  The following graphs that were tweeted out by FiveThirtyEight illustrate what I am talking about… 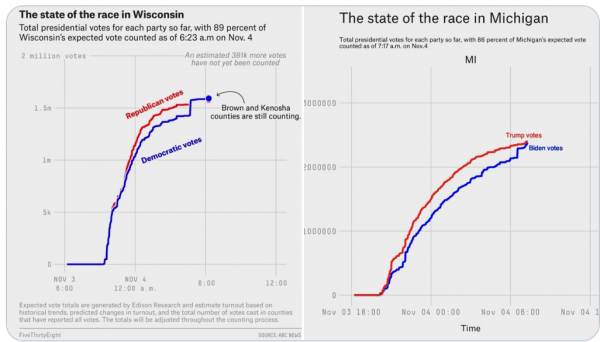 I don’t know about you, but those graphs look deeply troubling to me.

In addition, there is also a report of large numbers of votes being brought in to one counting facility in Michigan under very suspicious circumstances…

Last night at TLC (formerly Cobo Hall) where absentee ballots for Wayne County (Detroit) are being counted, a Ferrari, a van and a Chrysler 300 (I think) all pulled up into facility (large garage doors) with ballots inside vehicles. All three of them had out of state plates. This is an ANONYMOUS tip.

Every military ballot has to be duplicated (re-written). I don’t know why. This is very concerning.

Perhaps it was completely legitimate for those ballots to be transported in that manner in the middle of the night, but the American people deserve an explanation.

On top of everything else, many have pointed out that the vote count in Antrim County, Michigan appears to be exactly the opposite of what it should be…

There was also something suspicious about the vote reporting in Antrim County, Michigan, where Trump beat Hillary Clinton by 30 points in 2016. Initial vote totals there showed Biden ahead of Trump by 29 points, a result that can’t possibly be accurate, as plenty of journalists noted.

This is something that the Trump team needs to take to court, because otherwise it will soon be forgotten by everyone.

In Wisconsin, we have also been witnessing some very unusual things.

Trump had a huge lead in Wisconsin throughout the night of the election, but then a massive vote dump at the last minute swung the state to Biden.

Most of those votes came from the Milwaukee area.  According to the official results, seven voting wards in Milwaukee actually reported more votes than the number of registered voters on their books…

Seven City of Milwaukee voting wards reported more 2020 U.S. Presidential election votes than they had registered voters, according to an analysis of results and Secretary of State files.

Five of them are in the city’s eleventh aldermanic ward, on the city’s far Southwest Side.

Theoretically, that should be impossible.

You shouldn’t have more votes than you do voters, but somehow that apparently happened.

That really, really stinks, and this is another thing that the Trump legal team really needs to look into.

Overall, turnout in Milwaukee was way, way above historical norms.  In 2016, statewide turnout in Wisconsin was 67.34 percent, but somehow voting wards all over the city were reporting turnout levels greater than 80 percent…

All along, everyone knew that the states of Michigan, Wisconsin and Pennsylvania were going to be so critical in this election.

And just like we witnessed in Michigan and Wisconsin, late vote dumps are also changing the results in Pennsylvania.

For example, one batch of 23.277 votes from Philadelphia were all for Joe Biden.  The following was tweeted by FiveThirtyEight…

Unless these statistical anomalies are explained, I don’t know how anyone can ultimately accept the results of this election as being legitimate.

Trump initially had huge leads in Michigan, Wisconsin and Pennsylvania, and if he had won all three of those states he would have won another term.

And maybe he should have won all of them, and that is why we need recounts in all three states.

In addition to recounting all of the votes in all three states, each ballot also needs to be checked to make sure that it is legitimate.

Based on the evidence that we have so far, it appears that some very strange things are going on, and the American people deserve answers.

If we don’t get answers, millions upon millions of people will completely lose faith in the integrity of our elections.  And once faith is gone, it will be exceedingly difficult for it to ever be restored.