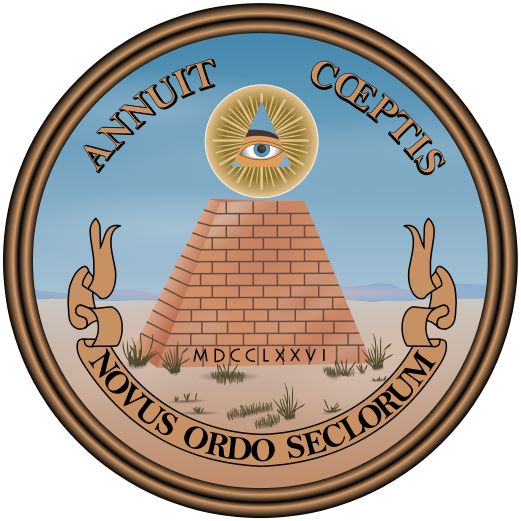 From the dawn of history, elites have always attempted to enslave humanity. Yes, there have certainly been times when those in power have slaughtered vast numbers of people, but normally those in power find it much more beneficial to profit from the labor of those that they are able to subjugate. If you are forced to build a pyramid, or pay a third of your crops in tribute, or hand over nearly half of your paycheck in taxes, that enriches those in power at your expense. You become a “human resource” that is being exploited to serve the interests of others. Today, some forms of slavery have been outlawed, but one of the most insidious forms is more pervasive than ever. It is called debt, and virtually every major decision of our lives involves more of it. For example, at the very beginning of our adult lives we are pushed to go to college, and Americans have piled up more than 1.2 trillion dollars of student loan debt at this point. When we buy homes, most Americans get mortgages that they can barely afford, and when we buy vehicles most Americans now stretch their loans out over five or six years. When we get married, that often means even more debt. And of course no society on Earth has ever piled up more credit card debt than we have. Almost all of us are in bondage to debt at this point, and as we slowly pay off that debt over the years we will greatly enrich the elitists that tricked us into going into so much debt in the first place. At the apex of this debt enslavement system is the Federal Reserve. As you will see below, it is an institution that is designed to produce as much debt as possible.

Many people also assume that the federal government “issues money”, but that is not true at all either. Under our current system, what the federal government actually does is borrow money that the Federal Reserve creates out of thin air. The big banks, the ultra-wealthy and other countries purchase the debt that is created, and we end up as debt servants to them. For a detailed explanation of how this works, please see my previous article entitled “Where Does Money Come From? The Giant Federal Reserve Scam That Most Americans Do Not Understand“. When it is all said and done, the elite end up holding the debt instruments and we end up being collectively responsible for the endlessly growing mountain of debt. Our politicians always promise to get the debt under control, but there is never enough money to both fund the government and pay the interest on the constantly expanding debt. So it always becomes necessary to borrow even more money. When it was created back in 1913, the Federal Reserve system was designed to create a perpetual government debt spiral from which it would never be possible to escape, and that is precisely what has happened.

Just look at the chart that I have posted below. Forty years ago, the U.S. national debt was less than half a trillion dollars. Today, it has exploded up to nearly 18 trillion dollars… 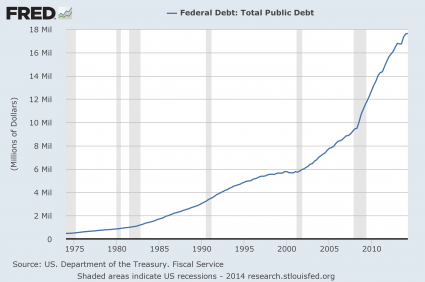 But the national debt is only part of the story. The big banks which control the Federal Reserve also seek to individually dominate our lives with debt. We have become a “buy now, pay later” society and the results have been absolutely catastrophic. 40 years ago, the total amount of debt in our system was just a shade over 2 trillion dollars. Today it is over 57 trillion dollars… 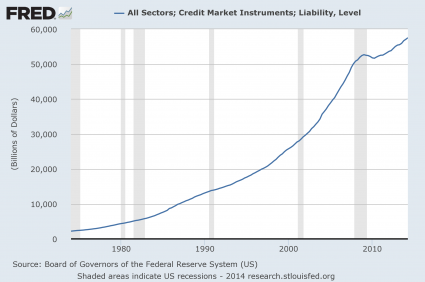 The big banks do not loan you money because they want to help you achieve “the American Dream”. The elitists loan you money because it will make them wealthier. For example, if you only make the minimum payment on a credit card each month, you will end up paying back several times as much money as you originally borrowed. It is a very insidious form of debt enslavement that most Americans simply do not understand.

Meanwhile, the Federal Reserve is also systematically destroying the wealth that you already have. If you try to buck the system and actually save money, the purchasing power of that money is continually being eroded by the Federal Reserve’s inflationary policies. The following chart comes directly from the Federal Reserve and it shows how the value of the U.S. dollar has plummeted over the past 40 years… 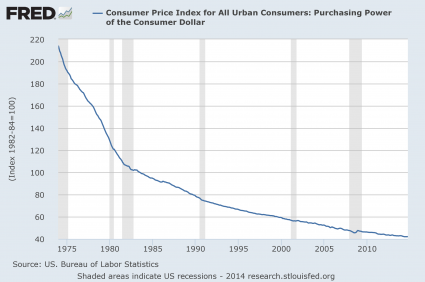 Overall, the U.S. dollar has lost approximately 98 percent of its value since the Fed was first established in 1913.

Most people seem to assume that if we could just send the “right politicians” to Washington D.C. that we could get our economy back on the right track.

What those people do not understand is that our system is fundamentally broken. We are trapped in a perpetual debt spiral that is destined to end in a horrifying collapse. Just “tweaking” a few things here or there and adjusting tax rates a bit is not going to fix anything. The vast majority of the “economic solutions” that our politicians talk about are basically equivalent to rearranging the deck chairs on the Titanic.

And of course the elite don’t want the rest of us to truly understand what is going on. Just think about it. Even though the Federal Reserve is one of the most important institutions in our society, and even though it is at the very heart of our economic system, our kids are taught next to nothing about the Fed in school. The vast majority of them have absolutely no idea where money comes from.

But the elite know that if we did understand what they were doing to us that most of us would start to get very upset. Henry Ford, the founder of Ford Motor Company, once said the following…

“It is well enough that people of the nation do not understand our banking and money system, for if they did, I believe there would be a revolution before tomorrow morning.”

Please share this article with as many people as you can. The truth sets people free, so let us do what we can to wake our fellow Americans up to this insidious debt enslavement system which dominates our society.