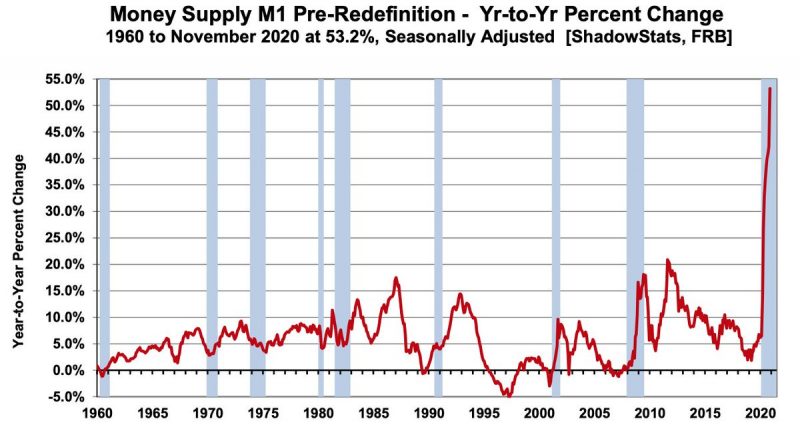 If we continue destroying the U.S. dollar at our current pace, toilet paper will eventually be more valuable than U.S. dollars.  I know that sounds absolutely crazy, but it is true.  Once the COVID pandemic hit the United States, those that control the levers of power in this country decided to go “full Weimar” and they never looked back.  As a result, the size of our money supply is rising at a rate that would have been unimaginable just a few short years ago.  To illustrate what I am talking about, I would like for you to check out this chart that was posted on Twitter by James Turk.  As you can see, M1 was up by more than 50 percent in 2020.

This chart is not from a 3rd world banana republic. It’s #USD M1 money supply. Prices are already rising in soybeans, stock indices, crude oil, copper #BTC & many more items. Money printing by the #federalreserve means #inflation in 2021 is baked into the cake. Own physical #gold pic.twitter.com/OhhlnDx8tN

We’ve never had a year like that in all of U.S. history.  What we are doing is literally insane, but most Americans aren’t even aware of what is happening because the mainstream media isn’t talking about it.

If you are not familiar with “M1”, here is a definition that comes from Investopedia…

M1 is the money supply that is composed of physical currency and coin, demand deposits, travelers’ checks, other checkable deposits, and negotiable order of withdrawal (NOW) accounts. M1 includes the most liquid portions of the money supply because it contains currency and assets that either are or can be quickly converted to cash. However, “near money” and “near, near money,” which fall under M2 and M3, cannot be converted to currency as quickly.

When new money enters the system, every dollar that you are currently holding becomes less valuable.

And if your paycheck does not rise at the same rate that the money supply is rising, that means that your paycheck becomes less valuable as well.

It is helpful to think of our money system as a pie.  When more dollars are added to the pie, your share of the pie steadily becomes smaller.

So who does benefit when the pie is expanded?

The ultra-wealthy do, and I will discuss that more below.

Just look at that for a moment.

It truly is breathtaking.  M1 has literally been rising at almost a vertical rate, and it makes all of the inflation that has come before look almost meaningless.

This is why the stock market keeps hitting record high after record high.  Stocks started to crash when COVID first started to spread in the United States, and the Federal Reserve decided to do whatever was necessary to rescue the markets.  The “unprecedented” response that we witnessed ended up being “a key driver of billionaire wealth” in 2020…

A key driver of billionaire wealth concentration was the unprecedented monetary policy response to stabilize financial markets in the early days of the pandemic, which spurred the stock market’s gravity-defying rise. When Wall Street was on the verge of panic in March, the Federal Reserve intervened with the promise of low rates and an open-ended liquidity spigot.

But in the process they borrowed and spent trillions of dollars that we did not have, and that also helped to fuel our transition into hyperinflation.

The good news is that hyperinflation is not showing up at the grocery store or at Walmart yet.  Eventually it will happen, but so far consumer prices are just rising at a pace that is quite a bit brisker than usual.  Where we are seeing hyperinflation is in stock prices, high end real estate in rural and suburban areas, and in other areas of the economy that the ultra-wealthy have been pouring their money into.

Despite the fact that we just endured one of the worst economic years in U.S. history, 2020 was actually a banner year for billionaires…

Between roughly mid-March and Dec. 22, the United States gained 56 new billionaires, according to the Institute for Policy Studies, bringing the total to 659. The wealth held by that small cadre of Americans has jumped by more than $1 trillion in the months since the pandemic began.

According to a December report issued jointly by Americans for Tax Fairness and the Institute for Policy Studies using data compiled by Forbes, America’s billionaires hold roughly $4 trillion in wealth — a figure roughly double what the 165 million poorest Americans are collectively worth. The 10 richest billionaires have a combined net worth of more than $1 trillion.

As I discussed the other day, 2020 was a “personal financial disaster” for 55 percent of all Americans.  The year ended with close to 20 million Americans still receiving government unemployment benefits, and poverty and homelessness have been exploding all around us.

In some cases, people were waiting in lines that were up to 12 hours long just to get a couple of bags of groceries at food banks around the nation.  We haven’t seen anything like this since the Great Depression of the 1930s, and many are expecting things to get even worse in 2021.

And with each passing day, more businesses are closing and more Americans are being laid off.

The retail sector has been hit particularly hard.  The following comes from Axios…

Malls are going belly up. Familiar names like J.C. Penney, Neiman Marcus and J. Crew have filed for bankruptcy. Increasingly, Americans’ shopping choices will boil down to a handful of internet Everything Stores and survival-of-the-fittest national chains.

And what we have experienced so far is just the tip of the iceberg.  One recent report projected that “100,000 brick-and-mortar U.S. retail stores will close by 2025”…

A research report from UBS predicts that 100,000 brick-and-mortar U.S. retail stores will close by 2025, in a trend that started before the pandemic and has accelerated amid coronavirus-related shutdowns.

Our national landscape is already littered with abandoned stores and restaurants, and they are telling us that it is only going to get worse.

What is our country going to look like as this process plays out?

Of course our authorities will just respond to every new crisis by printing even more money.

That is what they did down in Venezuela, and now just about everyone in Venezuela is a millionaire.

But most of those “millionaires” are living in crushing poverty because the money is absolutely worthless.

Sadly, many other countries are doing the same thing that the U.S. is doing, and so this hyperinflationary spiral is not likely to end any time soon.

But let there be no doubt that we are also in a global economic depression.  Global GDP is about 8 percent lower than it was before the pandemic started, and the outlook for 2021 does not look promising at all.

If you think that there is a way for this economic story to end well, just go back and look at the M1 chart from the Federal Reserve one more time.

Every other time this has been tried in human history, the story has ended badly.

Our story is going to end badly too, and every American needs to get prepared to survive in a very painful hyperinflationary environment.