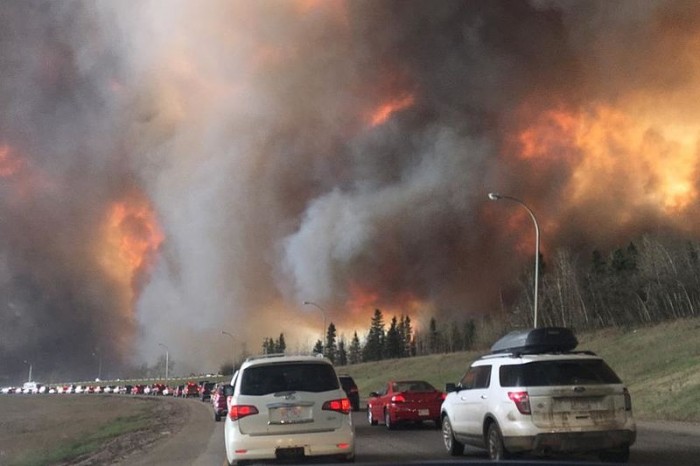 The gigantic wildfire that has forced the evacuation of the entire city of Fort McMurray in northern Alberta has been nicknamed “the Beast“, and mainstream news reports are telling us that it is now approximately 25 percent larger than New York City. 88,000 people have already been forced out of their homes, at least 1,600 buildings have been destroyed, and smoke from the fire has been spotted as far away as Iowa. To say that this is a “disaster” is a massive understatement. Northern Alberta is “tinder dry” right now, and authorities say that high winds could result in the size of the fire doubling by the end of the weekend. One-fourth of Canada’s oil output has already been shut down, and the edge of the fire is now getting very close to the neighboring province of Saskatchewan. This is already the most expensive natural disaster in the history of Canada, and officials fully expect to be fighting this blaze for months to come.

At this point, only rain is going to stop this fire. Canadian authorities insist that they are not going to be able to defeat this raging inferno no matter how many resources they throw at it. The best that they can hope for is to try to steer it away from heavily populated areas until the rain comes.

Nobody knows precisely how this tragedy is going to end, but everyone agrees that it is going to last for quite some time. According to the Washington Post, this fire has the potential to keep on burning “for months”…

The images are ones of devastation — scorched homes, virtually whole neighborhoods burned to the ground. And Canadian officials say they expect to fight the massive wildfire that has destroyed large parts of Alberta’s oil sands town for months.

There’s fear the growing wildfire could double in size and reach a major oil sands mine and even the neighboring province of Saskatchewan.

I have relatives that live up in Alberta, and this is the biggest thing to hit that part of the world in many, many years.

This massive fire is making headlines all over the planet, and some of the video footage that is emerging is so shocking that it can be hard to believe. Some of the terms being used to describe the devastation are “hell”, “the end of the world” and “Armageddon”…

“It was something like Armageddon,” said Morgan Elliott, who traveled with his fiancee, Cara Kennedy, and their baby, Abigail. “Everything was burnt, houses gone. Leaving the city, it was like a scene out of a movie. It reminded me of the TV show ‘The Walking Dead’ where you’re going on the highway, and there’s just abandoned vehicles everywhere; hundreds of cars, just abandoned vehicles.”

In this YouTube video, you can watch vehicles attempt to escape Fort McMurray as hot embers from towering flames just a few feet away rain down on them. What would you do in this kind of situation?…

The amount of resources that has been committed to fighting this fire has been unprecedented, and yet it just continues to rage wildly out of control. The following comes from CNN…

The blaze is moving in a northeast direction and could reach the border with Saskatchewan by the end of Saturday, Alberta Premier Rachel Notley said.

Unfortunately, a lot of Americans simply are not going to care what is happening up in Alberta because it is in Canada.

But let us not forget that 2015 was the worst year for wildfires in all of U.S. history. Last year more acres burned in the United States than we had ever seen before, and 2016 is already shaping up to be another very bad year.

In fact, according to the National Interagency Fire Center we are already more than a million acres ahead of the pace that was set last year.

I just checked the U.S. Drought Monitor, and much of the western third of the country is still extremely dry. Conditions are certainly ripe for another horrible wildfire season, and so let us pray for lots of rain between right now and the end of the summer.

Because all we have to do to see what a worst case scenario looks like is to watch what is going on in Fort McMurray right now.

To me, this is the closest thing that we have seen to “hell on Earth” in a very long time…