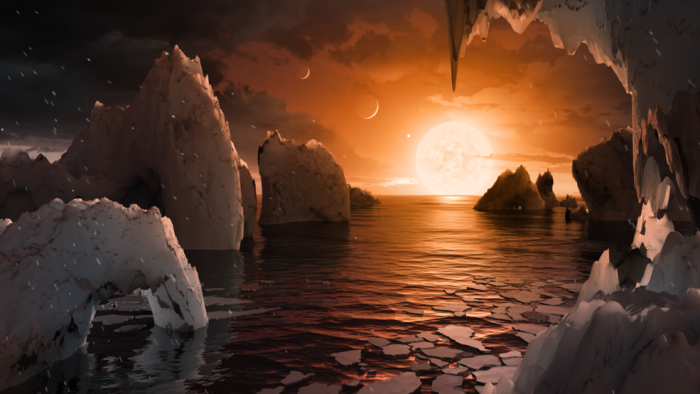 NASA told us in advance that there would be a huge announcement on Wednesday, and it certainly was not a disappointment. NASA’s declaration that 7 new Earth-sized planets had been discovered approximately 40 light years away from our sun made headlines all over the globe, and the Internet immediately started buzzing with lots of discussions about the possibility that these newly discovered worlds may have life on them. This isn’t the kind of thing that I normally write about on The Economic Collapse Blog, but some of the things that were being said by the scientists involved in this discovery seemed quite odd. It is one thing to say that some new planets have been found, but it is another thing entirely to start speculating about life on those planets. With each new discovery that is made, why does it always seem like NASA is trying to promote the idea that alien life may exist somewhere out there? Could it be possible that they are trying to mentally prepare us for something?

After the announcement was made on Wednesday, I went to the official NASA website, and sure enough in the article that had just been posted about this new discovery there was discussion about the possibility of alien life…

NASA’s Spitzer Space Telescope has revealed the first known system of seven Earth-size planets around a single star. Three of these planets are firmly located in the habitable zone, the area around the parent star where a rocky planet is most likely to have liquid water.

The discovery sets a new record for greatest number of habitable-zone planets found around a single star outside our solar system. All of these seven planets could have liquid water – key to life as we know it – under the right atmospheric conditions, but the chances are highest with the three in the habitable zone.

“This discovery could be a significant piece in the puzzle of finding habitable environments, places that are conducive to life,” said Thomas Zurbuchen, associate administrator of the agency’s Science Mission Directorate in Washington. “Answering the question ‘are we alone’ is a top science priority and finding so many planets like these for the first time in the habitable zone is a remarkable step forward toward that goal.”

If this discovery is confirmed, it is definitely quite remarkable.

But why engage in speculation about whether or not we are alone in the universe?

You can view a YouTube video from NASA about this new discovery right here. As you can see from the video, the scientists involved in this project are extremely excited…

Of course we must acknowledge that nobody has actually seen any of these planets. Based on data that astronomers have been able to observe, they assume that those seven planets must be there. The following comes from Smithsonian Magazine…

To detect these other worlds, Gillon and his team used the so-called “transit” method, one of several techniques for hunting planets. Other techniques include measuring the wobble of a star caused by a planet’s gravitational pull, observing how light from a distant star bends around a planet or capturing a direct image of the planet.

The power of the transit method comes from its simplicity: Astronomers measure the level of light from a star, and look for any dips in brightness that could be the result of a planet passing between the star and Earth. By seeing how much and how often the level of light is reduced during each “transit” of the planet in front of the star, astronomers can then estimate its size and orbit.

So it is entirely possible that scientists may be misinterpreting the data.

Someday we may find out that there are more planets in the system, or we may discover that there aren’t any planets there at all.

But assuming that those planets are actually there, what has astronomers buzzing more than anything else is the possibility that they may contain “life”…

“Looking for life elsewhere, this system is probably our best bet as of today,” study co-author Brice-Olivier Demory, a professor at the Center for Space and Habitability at the University of Bern in Switzerland, said in a statement.

The key is that these planets appear to have the right conditions for water to exist. Without water, it is generally assumed that a planet would not be able to support life. The following comes from an article posted on the website of The Independent entitled “Nasa’s ‘holy grail’: Entire new solar system that could support alien life discovered“…

No other star system has ever been found to contain so many Earth-sized and rocky planets, of the kind thought to be necessary to contain aliens.

The researchers might soon be able to find evidence of life on the planets, they have said. British astronomer Dr Chris Copperwheat, from Liverpool John Moores University, who was part of the international team, said: “The discovery of multiple rocky planets with surface temperatures which allow for liquid water make this amazing system an exciting future target in the search for life.”

And of course NASA is not just looking at these planets in their obsessive search for alien life.

In fact, NASA is sending a probe to one of Jupiter’s moons named Europa specifically to search for alien life…

NASA believes there’s a gigantic ocean locked beneath its frozen surface and is planning to send a robotic craft to see if aliens are swimming in it.

This week, the space agency has revealed its three goals for the upcoming search for life.

It wrote: “The primary goal is to search for evidence of life on Europa.

“The other goals are to assess the habitability of Europa by directly analyzing material from the surface, and to characterize the surface and subsurface to support future robotic exploration of Europa and its ocean.”

So why is NASA so sure that alien life must be out there somewhere?

Do they know things that they aren’t disclosing to the rest of us?

As a society, we are constantly being conditioned to the idea that “alien life” must exist. This is one of the major themes in our movies, our television shows and our video games.

And now the scientific community has fully embraced this idea.

Could it be possible that the stage is being set for “the great deception” that authors such as L.A. Marzulli are constantly warning us about?

If someday a big announcement is made that “we are not alone” in the universe, humanity will already have been heavily conditioned to accept it as the truth.

Unfortunately, we live at a time when deception is running rampant, and that is why it is absolutely critical to not let someone else do your thinking for you.

4 thoughts on “Why Is NASA Using The Discovery Of 7 New Earth-Sized Planets To Promote The Idea That Alien Life May Exist?”