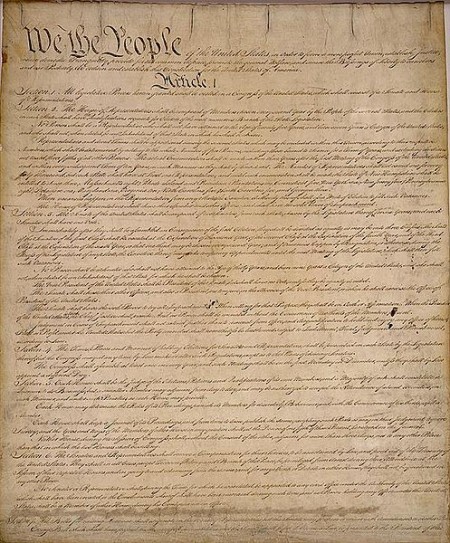 But, then again, are we really that independent?  Would the Founding Fathers look at us and be proud, or would they bow their heads in sorrow at what our nation has become?

Most of the citizens of the United States are now like the victims of an abusive relationship. People try frantically to avoid breaking laws because they don’t want to be penalized.  They sacrifice their own well-being and happiness in order to avoid getting into trouble. I know that I personally get a little burst of adrenaline and say, “Oh crap!” every time a police car happens to be behind me, and I drive a little more carefully, signal a little bit sooner, and make certain my full stop lasts for a count of 5 Mississippis. Our right to defend ourselves with firearms is at risk, you can’t grow vegetables in your front yard in many places, and in some states, you aren’t even allowed to collect the gift of rain to water your garden in dry times. The vast quantity of ever-multiplying statutes are so plentiful even the most law-abiding citizen cannot get through a day without unwittingly breaking one.

If the laws be so voluminous that they cannot be read, or so incoherent that they cannot be understood; if they be repealed or revised before they are promulgated, or undergo such incessant changes that no man, who knows what the law is to-day, can guess what it will be to-morrow. Law is defined to be a rule of action; but how can that be a rule, which is little known, and less fixed?

This morning when I was doing my usual rounds of blogs and news, I stopped over at the Mom with a Prep blog, where Jane had published the transcript of the Declaration of Independence as a reminder of why we are celebrating today.  The words seemed even more meaningful, considering our current administration, the unjust taxes being forced upon us through Obamacare, and the militarized police force in pretty much every city in America. This section in particular spoke to me:

We hold these truths to be self-evident, that all men are created equal, that they are endowed by their Creator with certain unalienable Rights, that among these are Life, Liberty and the pursuit of Happiness.–That to secure these rights, Governments are instituted among Men, deriving their just powers from the consent of the governed, –That whenever any Form of Government becomes destructive of these ends, it is the Right of the People to alter or to abolish it, and to institute new Government, laying its foundation on such principles and organizing its powers in such form, as to them shall seem most likely to effect their Safety and Happiness. Prudence, indeed, will dictate that Governments long established should not be changed for light and transient causes; and accordingly all experience hath shewn, that mankind are more disposed to suffer, while evils are sufferable, than to right themselves by abolishing the forms to which they are accustomed. But when a long train of abuses and usurpations, pursuing invariably the same Object evinces a design to reduce them under absolute Despotism, it is their right, it is their duty, to throw off such Government, and to provide new Guards for their future security.

Our government has crossed the line and become tyrannical. Through insidious acts of terror inflicted upon their own people, they’ve enacted terrifying, sweeping legislations that give them almost unlimited power…the NDAA (indefinite detention) and the ironically named “Patriot Act”, to name two. Law enforcement is just a gang with badges, serving the government and not the people.

The “authorities” are running amok, blowing up babies in their cribs and killing homeless people and family pets because they know they’ll get away with it. They are nothing but revenue generators, looking for the smallest infraction for which to fine you.

It’s every day things that allow us to be self-sufficient and independent from “the system” that are becoming outlawed. What on earth has our nation come to, when growing your own food is an act of revolution? When being armed in order to defend yourself and your family is considered some kind of subversive act? When the public schools, which used to teach useful things like Home Economics and Auto Shop, and used to have extracurricular sports like marksmanship, now suspend children for pointing their fingers and saying “bang”? When collecting a bounty of rainwater for dry times is against the law?

How is it acceptable that the government can attempt to force people to inject toxins (in the form of mandatory vaccines) into our bodies and our children’s bodies? How is it acceptable that they can attempt to force us to send our children to approved schools to learn approved curriculums? That they force us to pay each year in order to drive our cars and live in our paid-for homes?

I’m pretty sure this is what our forefathers meant when they said “But when a long train of abuses and usurpations, pursuing invariably the same Object evinces a design to reduce them under absolute Despotism, it is their right, it is their duty, to throw off such Government, and to provide new Guards for their future security.”

The 13th Amendment to the Constitution abolished slavery.  This means that if you are a slave today, it’s either illegal, or you have voluntarily accepted your servitude.

Neither slavery nor involuntary servitude, except as a punishment for crime whereof the party shall have been duly convicted, shall exist within the United States, or any place subject to their jurisdiction.

You have a Constitutionally protected right to be free. If you aren’t free, then revolution is your duty. Part of the power that the government holds over people is the fact that they have stuff we need. So, the key to independence is not to need the stuff they have.  When there is nothing that you require enough to submit, then bullying you becomes much more difficult. Here are some examples:

The way you lead your life every single day can be a personal Declaration of Independence.  By refusing to concede your natural rights, quietly and resolutely, you are performing an act of revolution. This only requires your consistent determination not to be infringed upon.

Personally, I withdraw my consent to be governed by the people in Washington DC that allegedly represent me. Because they don’t.  They do no mirror my wishes and beliefs. They do not support my pursuit of personal freedom.

The most revolutionary act is to be self-sufficient and in need of nothing that the government can provide for you in exchange for some small liberty.  This list of insurrections is by no means comprehensive.

Part of his list was originally published HERE on June 1, 2013

Today, to celebrate Independence Day, I’m taking another small step to free myself from their system. .  I’m revolting by beginning construction on a chicken coop.  I’m declaring my own independence by making my small town home as self-sufficient as possible.
How will you revolt against tyranny today?