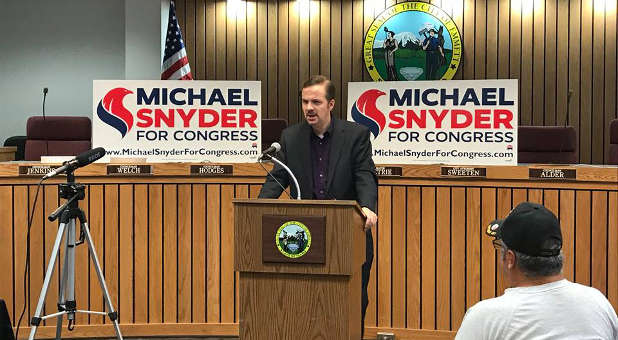 I need your help if I am going to overcome the vicious attacks that are coming from the left and win on May 15th. I know that most people are focused on preparing for the upcoming holidays this time of the year, but for this campaign crunch time has officially arrived. Idaho’s first congressional district is extremely conservative, and so whoever wins the Republican primary next May is almost certainly going to be the next member of Congress. Since Raul Labrador is running for governor, there is no incumbent in this race, and that means that it is totally wide open. The numbers are telling us that we have a very clear path to victory, but the only way that we will be able to emerge victorious is if we have enough resources to finish the race. This month we were running so low that we actually had to cut back on some of the things that we were planning to do. If this continues, we won’t be able to get our message out as effectively as we need to and another candidate could try to pull an upset victory by simply outspending us. I am praying for some help, and if every one of my readers were to make just a small donation today we would have everything that we need for the rest of the campaign by tomorrow…

We launched this campaign on July 4th, and it is literally a miracle how far we have come in such little time. Many of the most prominent conservatives in the entire state have gotten involved, people all over the district are buzzing about how well we are doing, and we won the most recent online poll.

But we are rapidly outgrowing our limited resources.

Earlier today I got some great news over the telephone. We have the opportunity to put up a whole bunch of 4×8 signs in south Idaho, and each of those signs will be seen thousands of times a day.

But in order to do that, we have got to print up more 4×8 signs, and they are expensive. And more 4×8 signs are not even on the list of extremely pressing campaign needs that we are currently raising money for.

In faith, I believe that we are going to put up all of those signs, and I am asking for your help to get that done…

Did you happen to see what happened on Tuesday? Republican candidates got killed all over the nation. It was a major league wake up call, because we are in the midst of a battle for the future of this country, and right now the Democrats have all of the momentum.

The 2018 mid-term elections are a golden opportunity for us to elect pro-Trump candidates all over the nation. There are several dozen running, but we are only going to win if you all get behind us. If pro-Trump candidates don’t win the Republican primaries that will start happening in just a few months, there won’t be anyone good to vote for in November 2018, and the mid-term elections will be lost before they even happen.

This is such a critical moment in our history, and I am asking you to support those that are sacrificing incredible amounts of time, effort, money and energy in order to run. Please support my campaign, because we very much need a financial miracle right now…

We are also working on new language for our brochure, and we have come up with a list of 22 reasons why people should support our campaign. Look this list over and then let me know any changes that you would make…

#1 A Pro-Trump Christian Conservative – Michael is the most conservative candidate in this race, and he is proud to stand with President Trump.

#2 It’s Time To Drain The Swamp – The same rules that apply to the rest of us should also apply to Congress, and Michael will actively fight corruption on every front.

#3 Every RINO Must Go – Way too many Republicans have been fighting Trump’s agenda and acting like Democrats. It is time to hold them accountable, and that means every ‘Republican in name only’ needs to go.

#4 100% Pro-Life – No money for Planned Parenthood ever. Nearly 60 million babies have been murdered since 1973, and Michael is making an unbreakable pledge to vote against any bill that funds Planned Parenthood 100% of the time.

#5 100% Pro-Gun – The Constitution says that the right of the people to keep and bear arms shall not be infringed. Michael believes that every American has a constitutional right to carry a gun, and he will never back down from defending the Second Amendment even a single inch.

#6 Abolish The IRS & The Income Tax – We didn’t have an income tax from 1872 to 1913, and that was the greatest period of economic growth in U.S. history. As we fight a long-term battle to abolish the income tax, in the short-term we can at least go to a flat tax or a fair tax, both of which would be far superior to what we have now.

#7 Abolish The Federal Reserve – Since the Fed was created in 1913, we have had 18 recessions, the value of the U.S. dollar has fallen by about 98 percent, and the U.S. national debt has gotten more than 6000 times larger. Abolishing this debt-based system is one of the keys to a bright economic future for America.

#8 Getting Federal Bureaucrats Off Our Backs – Michael will work to get the federal government off of the backs of our farmers, our loggers, our miners, our ranchers and our small business owners.

#9 Local Control Of Education – It is time to get the federal government out of the education business. Michael wants to abolish Common Core and the Department of Education, and he wants control over education to be as close to the local level as possible.

#10 Shut Down Big Brother Spying – Government agencies have been conducting unconstitutional surveillance of American citizens for decades, and that needs to stop now.

#12 100% Repeal Of Obamacare – Rapidly rising health insurance premiums are financially crippling Idaho families. Republicans in Congress have fumbled the ball, and we must repeal Obamacare immediately.

#13 Build The Wall – We need to make sure that everyone comes into this country through the front door. We must end illegal immigration, and so Michael supports President Trump’s call to build a wall on the southern border.

#14 Supporting Our Veterans – Michael’s father is a vet, and Michael will work passionately to make sure that our veterans receive the respect, care and support that they deserve.

#15 Fighting Islamic Terror – Michael fully supports the fight against ISIS, and he will push for legislation that would give local communities all over America the option to say no to refugees from terrorist hotbeds.

#17 Bringing Jobs Back To America – The U.S. has lost more than 70,000 factories since China joined the WTO in 2001. Our formerly great manufacturing cities now look like war zones, and we desperately need to start making things in this country once again.

#18 Resisting The Globalists – We must strongly fight all attempts by the globalists to erode American sovereignty.

#19 Supporting States Rights – It is almost as if the 10th Amendment doesn’t even exist today. If Michael is elected, this is what his message to the feds will be: ‘Hand over the keys and get out of Idaho’.

#20 Removing The Wolves – Under Bill Clinton, Canadian gray wolves were brought to Idaho. These wolves travel in packs and are killing machines. Michael is 100% committed to removing these wolves from our state.

#21 Holding Judges Accountable – Federal judges that disregard the U.S. Constitution and that choose to legislate from the bench should be subject to impeachment.

#22 An Unashamed Christian – Michael is not ashamed to say that he is a Bible-believing Christian, and if we truly want to make America great again we need to return to the values and principles that this nation was founded upon.

This message is resonating with voters wherever we go, and people all over the district are eagerly asking us to hold more campaign events, but in order to do that we have got to have more funding.

In this campaign we have seen little miracle after little miracle, and now we need another one. I am praying for help, and I am asking you to prayerfully consider making a contribution today…

If you live in Idaho, please let us know that you would like to have a bumper sticker and we’ll get one mailed out to you. And please don’t forget to let us know what you think of the 22 points that we are working on for the next round of brochures.

Of course what we need more than anything is prayer. Please pray for me, Meranda, Atarah, everyone else involved in this campaign and for all of our families. This has truly been a grueling process, and the final six months until election day are going to be absolutely crazy. We are going to need more grace and strength than ever before, because it won’t be easy, but with God all things are possible.