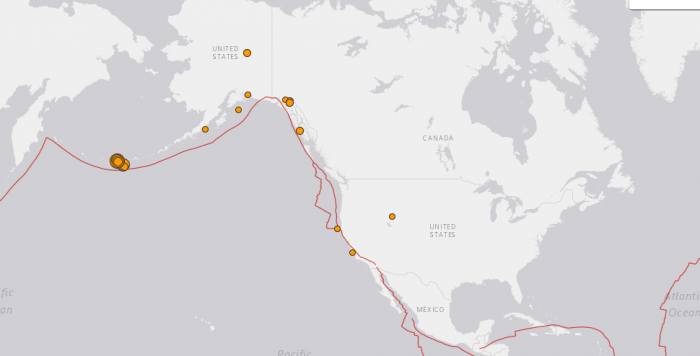 Within the last 24 hours, 45 earthquakes of magnitude 2.5 or greater have struck Alaska, and 25 of them were of magnitude 4.0 or greater.  The worst one had a magnitude of 6.2, but none of the earthquakes did much damage because none of them hit heavily populated areas.  But the reason why all of this shaking is causing so much concern is because the “Ring of Fire” runs right along the southern Alaska coastline, and all of the earthquakes except for one were along the southern coast.

After running along the southern Alaska coastline, the Ring of Fire goes south along the west coast of Canada, the United States and Mexico.  What affects one part of a fault network will often trigger something along another portion of the same fault network, and so many living on the west coast are watching the shaking in Alaska with deep concern.

For a long time scientists have acknowledged that a major Cascadia subduction zone earthquake is way overdue, and when one finally strikes the devastation that we could see in the Pacific northwest is likely to be off the charts.  In fact, some scientists believe that the coming Cascadia subduction zone earthquake could potentially be as high as magnitude 9.0…

That 9.0-magnitude quake could trigger a 500 mph wave and put 70,000 people in the “inundation zone” in serious risk. Depending on their location within that zone, Kathryn Schulz writes in her article, people will have between 10 and 30 minutes to evacuate.

If a giant earthquake along the Cascadia subduction zone ever did cause a tsunami of that size, the death and destruction would be unimaginable.  Just consider what physicist Michio Kaku told CBS News about such an event…

“In Japan, they practice this. Children know exactly what to do, and there’s an early warning system that we don’t have in Seattle that we do have in Japan,” Kaku said. “There are building codes that are not being enforced. Realize that many buildings are just going to be toppled when this gigantic earthquake, a 9.0, and a tsunami hits the Seattle, Tacoma and Portland area.”

According to the FEMA director responsible for Oregon, Washington, Idaho and Alaska, the operating assumption is that “everything west of Interstate 5 will be toast.”

Further south, scientists are expecting “the Big One” to hit California at literally any time.  The experts that have studied these things are warning that the 800-mile-long San Andreas fault “could unzip all at once”, and one recent study claims that a big enough earthquake “could plunge large parts of California into the sea almost instantly”…

Let us certainly hope that nothing like that happens any time soon.

But without a doubt the crust of our planet is becoming increasingly unstable, and we are living at a time when the number of earthquakes just continues to rise.

As I was writing this piece, I came across an article in a major British news source about a researcher that is warning that the gravitational pull caused by certain planets aligning will create ideal conditions for major seismic activity this week…

Frank Hoogerbeets has issued an online “major earthquake warning” amid fears a “big one” is on its way, claiming it could also cause a tsunami.

Mr Hoogerbeets, who is based in the Netherlands, uses a non-scientifically recognised way of predicting earthquakes based on planetary alignments with Earth.

He wrote on his website ditrianum.org: “On May 9 2017, three planetary alignments converge, one of which is Earth-Mercury-Uranus.

“It will be the third time this year that these three planets align; the previous two caused a 6.6 and a 6.9 magnitude earthquake respectively.

“The other alignments around the 9th are Mars-Venus-Saturn and Mars-Sun-Mercury.

“This convergence is also close to Full Moon (May 10).”

Of course we have already seen major seismic activity in Alaska, and we shall see if anything else happens over the next few days.

Shark attacks are on the rise along the California coast.

“Beach access to the water is closed today because we had a girl get bit by a shark,” said one park official.

Many believe that sharks become more aggressive when major seismic activity is imminent.

I don’t know if there is any truth to that, but considering everything else that is happening I found that to be quite interesting.

I have seen in a vision about six years ago, the plates shifting under the coastline by California. God showed me it was going to massive. The entire coastline from Alaska down to Mexico was going to be destroyed, and a part of California that juts out to the West on the ocean will be completely swept away. God gave me a sign to look for before this happens: shark attacks. Sounds strange, I know, but sharks hunt by vibration, and they will actually be sending the plates shifting, and not their pray. This is what will cause shark attacks to occur in greater frequency.

Once again, let’s hope that nothing like this happens any time soon.

But we shouldn’t stick our heads in the sand either.

As I discuss in my book about the end times, Jesus told us that an increase in seismic activity would be a sign that His return was getting close.

Clearly that is happening, and I am entirely convinced that in the not too distant future we will start seeing natural disasters on a scale that we have never experienced before.