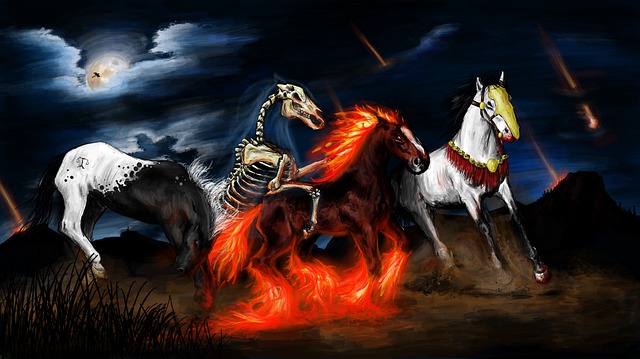 Could it be possible that we are living in the period of time that the Bible refers to as “the last days”? And if so, what does that mean for our future? As we approach the final months of 2015, it seems like more people are talking about apocalyptic scenarios than ever before. The mainstream media is doing articles on “end of the world fears“, and it is being reported that 41 percent of all Americans believe that “we are living in what the Bible calls the last days.” For those that believe, the signs are everywhere – geopolitical instability, moral decay, steadily increasing numbers of natural disasters and a global financial system that could fall apart at any moment. Others mock the idea that we could be living in “the last days”, and many of them point to the amazing technological progress that humanity is making and the unprecedented prosperity that we have been enjoying in recent times. If things are actually “getting better”, they argue, then how could we possibly be living in the end times described in the Bible? And of course atheists are convinced that God doesn’t exist at all, and that all of this apocalyptic talk is just a bunch of religious nonsense. So what is the truth?

This is a very controversial area of discussion, and I certainly recognize that there are a wide variety of opinions on this. I am going to share with you what I think, and you can take it for what you think that it is worth. Personally, I always like to start with certain preconditions that had to have been met before the last days as described in the Bible could begin.

But that does not necessarily mean that we are in “the last days”. Even though certain preconditions have been met, the return of Jesus Christ could still potentially be a way off.

In Matthew chapter 24, Jesus describes some other things that we should look for just prior to His return…

5 For many shall come in my name, saying, I am Christ; and shall deceive many.

6 And ye shall hear of wars and rumours of wars: see that ye be not troubled: for all these things must come to pass, but the end is not yet.

7 For nation shall rise against nation, and kingdom against kingdom: and there shall be famines, and pestilences, and earthquakes, in divers places.

8 All these are the beginning of sorrows.

9 Then shall they deliver you up to be afflicted, and shall kill you: and ye shall be hated of all nations for my name’s sake.

11 And many false prophets shall rise, and shall deceive many.

12 And because iniquity shall abound, the love of many shall wax cold.

13 But he that shall endure unto the end, the same shall be saved.

14 And this gospel of the kingdom shall be preached in all the world for a witness unto all nations; and then shall the end come.

But in this article I want to focus on the phrase “iniquity shall abound”.

For decades, the United States and much of the rest of the world has been in moral decline. For this country in particular, I would refer you to an article that I did entitled “100 Facts About The Moral Collapse Of America That Are Almost Too Crazy To Believe“. Our nation has become a cesspool of wickedness, filth and corruption, and it is getting worse with each passing day.

It has been said that if God does not judge the United States that He will have to apologize to Sodom and Gomorrah. Prominent Christian ministers all over America believe that we stand right at the precipice of major judgment, and this includes Billy Graham’s own son…

Franklin Graham, president of the Billy Graham Evangelistic Association, says the “defining moment” for America and humanity has arrived.

“As a nation we have arrogantly turned our back on God, and I believe God’s judgment will come against our country,” Graham says.

I agree with Franklin Graham.

In fact, I believe that America is being shown exactly why judgment is coming.

For example, I believe that all of these undercover Planned Parenthood videos have come out at this specific time so that the entire nation can be confronted with our nightmarish crimes against humanity.

Virtually everyone in America now knows that Planned Parenthood viciously murders babies, harvests their body parts, and sells them off to the highest bidder.

And the U.S. government is funding this.

So where is the outcry?

Where is the national repentance?

There should be Nuremburg-style trials for what is going on, and yet the silence is deafening!

The sad truth is that we can’t even get Planned Parenthood defunded, and some of our politicians actually intend to go after the organization that made the undercover videos exposing these practices.

Today, most churches and most Christians don’t even want to utter the word “abortion” because it might “offend” someone. Plus, many Christians are so busy ripping each other to pieces that they don’t even have time to address the things that really matter.

For decades, God has been pleading with America to repent, but there has been no repentance.

So now God is going to have to use judgment to try to wake us up. And we should be very thankful for this, because I believe that without the shaking that is coming there would be no repentance at all.

God could have set a day for the return of His Son that had no warnings whatsoever. But because shaking after shaking is coming, there will be opportunity after opportunity for all of us to turn back to God, and that is what He ultimately wants.

The God of the Bible has laid out His plan in advance, and it is there for everyone to see. One scholar has discovered that there are at least 1,800 references to the return of Jesus Christ in the Scriptures…

In The End, Bible prophecy scholar Dr. Mark Hitchcock wrote there are more than 1,800 references to the Second Coming in the Bible and for every prophecy about Christ’s first coming there are eight regarding His Second Coming. People are exhorted more than 50 times to be ready for Christ’s return. In light of present world conditions, we need to not only prepare for Jesus’ return, but to tell others about it too. Their eternal destinies are at stake.

Ultimately, all of us get to choose what we will believe, and most people end up believing exactly what they want to believe.

But for those that are truly seeking, the truth is not hard to find.

Yes, I believe that we are living in the last days just before the return of Jesus Christ as described in the Bible.

6 thoughts on “Are We Living In The Last Days?”