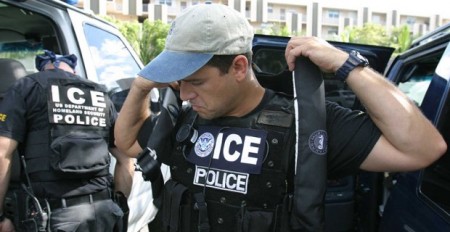 An Immigration and Customs Enforcement employee claims that the Obama administration has handed a number of ICE agents in the Murrieta/LA area paid temporary leave, a move that will exacerbate the mass influx of illegal immigrants into the region.

Liberty News’ Eric Odom, who is currently on the scene in the flashpoint town of Murrieta, says an ICE employee who lives in Orange County told him, “the Obama administration has furloughed Murrieta/LA area ICE agents full time until further notice,” but that the agents would continue to receive full pay.

“One would think any ICE agents still being paid full time would be deployed to actually assist the U.S. in its fight against Obama’s foreign invasion of the interior United States. Especially in light of the controversially fight between the federal government and the citizens of Murrieta,” writes Odom, noting that the move weakens American security without even saving any money.

Murrieta has been the site of clashes between pro-amnesty demonstrators and anti-illegal immigration activists since last week, with the arrival of militant La Raza members likely to escalate tensions.

Anti-amnesty activists are attempting to stop the arrival of busloads of illegal immigrants, mainly children, who are being transferred from overcrowded detention facilities in Texas.