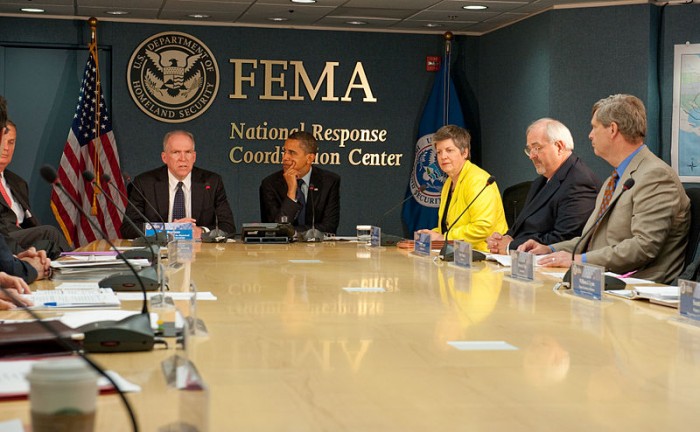 When Barack Obama speaks to the public, it is very rare that he does so without a specific purpose in mind. So why is he urging Americans “to be prepared for a disaster” all of a sudden? On May 31, Obama took time out of his extremely busy schedule to deliver an address at the FEMA National Response Coordination Center in Washington. During his speech, he stressed that every American is responsible for preparing for disasters, and that includes “having an evacuation plan” and “having a fully stocked disaster supply kit”. These are basic steps that I have been encouraging people to do for years, but if they won’t listen to me, perhaps they will listen to the man currently residing in the White House. The following excerpt from Obama’s speech comes directly from the official White House website…

One of the things that we have learned over the course of the last seven and a half years is that government plays a vital role, but it is every citizen’s responsibility to be prepared for a disaster. And that means taking proactive steps, like having an evacuation plan, having a fully stocked disaster supply kit. If your local authorities ask you to evacuate, you have to do it. Don’t wait.

This speech was timed to coincide with the beginning of the hurricane season, although hurricanes have not posed much of a threat lately.

In fact, a major hurricane has not made landfall in the United States for 127 straight months.

But without a doubt, we all need to be preparing for disaster. Hurricanes can create a short-term emergency that can last for a few days, but there are other threats that could create a major emergency that could potentially last for an extended period of time. That list of potential threats includes a major volcanic eruption, a natural or engineered pandemic, a west coast earthquake, a New Madrid earthquake, a tsunami on either the east or west coasts, a meteor impact, Islamic terror, war, an EMP burst that takes down the power grid, cyberwarfare, economic collapse, and civil unrest resulting in the imposition of martial law.

Of course the items that I just mentioned are not mutually exclusive. In fact, in different scenarios we could actually see multiple events happen in rapid succession.

And what we’ve been seeing is some public complacency slipping in; a large portion of people not having preparedness kits, not having evacuation plans.

This is exactly what I have been noticing as well. There appears to be a tremendous amount of apathy out there, and relatively few people really seem to feel much urgency to get prepared these days.

My contacts in the emergency preparedness industry have been telling me that sales are way down right now. There was a big peak last fall, but since then it is like interest in prepping has just fallen off the map.

Ultimately, those companies are going to be okay because interest will pick back up shortly as global events begin to spiral completely out of control. However, of much greater concern is the fact that people have not been using this period of relative calm constructively.

Just like we have seen in Venezuela, time to prepare eventually runs out. And someday there will be millions of parents that are absolutely horrified when their children come to them crying out for food and they don’t have anything to give to them because they didn’t heed the warnings and they didn’t get prepared.

When that day arrives, many of those families may be forced to turn to whatever help the government is offering at the time.

One more thing that I found particularly noteworthy about Obama’s speech was that he said that there is now “a FEMA app” that can direct you to the nearest “FEMA shelter” in the event of a major emergency.

If you need information about how to put together an evacuation plan, how to put together a disaster preparedness kit, as Craig said, we’ve got an app for everything now. We have a FEMA app in English and in Spanish to help you prepare your family for a disaster. You can update the National Weather Service alerts. You can get safety tips for more than 20 kinds of hazards. It provides you directions to nearby shelters.

Could you envision yourself and your family having to take refuge in a “FEMA shelter” someday?

If not, you should do what you can to get prepared now. Over the next couple of days, my wife and I will be releasing a couple of new videos about preparation on our YouTube channel. I hope that many of you will check them out.

Unlike Venezuela, it looks like we may still have a little bit more time to prepare for what is ahead. Some people will relax and use this time to party, but those that are wise will work diligently and will do what they can to get ready for the exceedingly challenging times that are rapidly approaching.

Hopefully you are listening to the warnings and are heeding what the watchmen are saying.

If not, the consequences for what will happen to you and your family will ultimately be on your own hands.