Skip to content
FacebookTwitter
Do you have any idea what this thing is? On December 16th, a Brazilian photographer was taking a walk in a local park when he noticed a very strange object hovering in the sky overhead. Because it was quite a distance away, he didn’t think too much of it, and he continued on with his walk…

On December 16, 2018 during a walk in a park located in Mairipora, São Paulo Brazil at 10 o’clock in the morning the photographer saw a very strange white object in the sky. Although the object was very far away or very small, yet it stood out greatly.

At the time he thought it was strange, but he continued his walk and did not give much importance to it.

But the object didn’t go away. The photographer’s house is only about 3 to 4 kilometers away from the park, and by the time he arrived home it was still there.

So he got out his camera and took some photographs and also captured some video footage which he later posted to YouTube. The following comes from the YouTube video’s description…

As I could not identify the object, I photographed sometimes with my camera that has a zoom of 50x, in addition also I made a video. My wife also saw the object. I do not know if it could be a weather balloon, I do not have the experience to identify, but it seemed to be quite different from the images that I found on the internet.

What in the world could this be?

Is it a “weather balloon” or could it be possible that this really is some sort of “sky creature”? 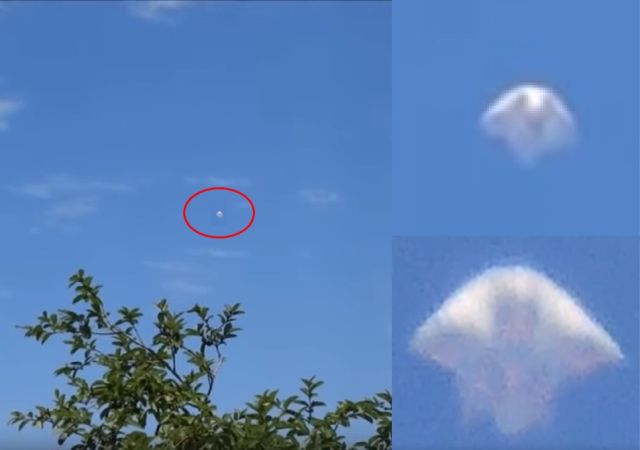